We are not going to see a new generation of GPUs until next year, which will also usher in a third player, that being Intel and its Arc lineup. But while RDNA 3 (AMD) and Ada Lovelace (NVIDIA) are still off in the distance bit, AMD might be getting ready to refresh its laptop graphics lineup with RDNA 2 GPUs built on a 6-nanometer manufacturing process.
RDNA 2 is AMD's latest-generation graphics architecture and is currently being manufactured on TSMC's 7nm node. In the mobile sector, there are just three SKUs at the moment. They include the flagship Radeon RX 6800M with 40 compute units, 96MB of Infinity Cache, and 12GB of GDDR6 memory, followed by the Radeon RX 6700M (36 CUs, 80MB Infinity Cache, 10GB GDDR6) and Radeon RX 6600M (28 CUs, 32MB Infinity Cache, 8GB GDDR6).
It's expected AMD will flesh out its current-gen lineup with lower-end parts, but it might also have something else up its silicon sleeve. Disclosuzen, a leaker with a favorable track record (and who recently tipped the upcoming AMD 4800S Desktop Kit), told the folks at Videocardz that AMD is readying a new "Radeon RX 6000S Mobile Graphics" series. 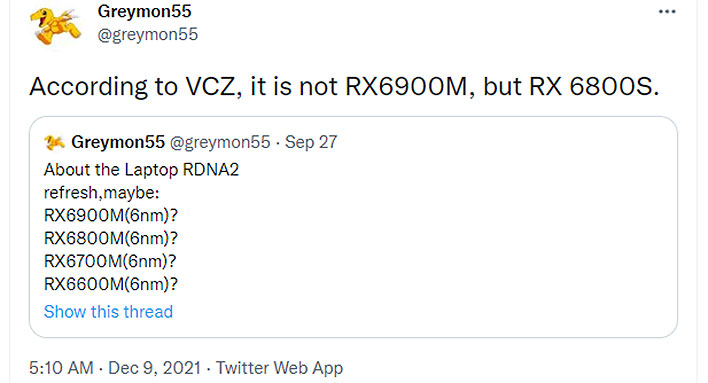 We're not sure if Disclosuzen provided any more details than that, but it's worth noting that another prominent leaker (@greymon55) stated back in September that a laptop RDNA 2 refresh was a possibility. In an updated tweet, they acknowledge the latest rumor and update their previous information a tad—it's now believed that there will not be a Radeon RX 6900M, which instead will be replaced by a Radeon RX 6800S.
Moving to TSMC's 6nm node offers 18 percent more logic density compared to 7nm. Other optimizations could potentially deliver higher clock speeds and better power efficiency, for a jump in performance compared to the current lineup.
The timing will be interesting, provided the leaked information is accurate. AMD's Ryzen 6000 mobile series (Zen 3+, Rembrandt) also on 6nm will release sometime in 2022. It makes sense that the Radeon RX 6000S series, if it does exist, will come out the same time.