AMD has officially returned to the modern generation discrete mobile graphics arena, where its newly minted Radeon RX 6000M series will soon duke it out with NVIDIA's GeForce RTX 30 series. Announced at Computex 2021, AMD's latest mobile GPUs are powered by its second generation Radeon DNA (RDNA 2) graphics architecture, just like its Radeon RX 6000 series of desktop graphics cards.
Make no mistake, AMD has it sights set on high-end gaming. According to the company, the Radeon RX 6000M series delivers up to 1.5x higher performance than the previous generation solutions, or the same performance at up to 43 percent lower power. If true—and you can bet we will put the claims to the test—that would be an impressive uplift in the mobile space.
"There have been incredible advances in gaming over the last several years, with powerful technologies allowing desktop PCs to deliver high-octane, beautifully complex and immersive worlds like never before," said Scott Herkelman, corporate vice president and general manage of AMD's graphics business unit. "Today we're excited to bring the high-performance, energy-efficient AMD RDNA 2 architecture to next-generation laptops to unlock the same level of high-performance experiences and true-to-life visuals for mobile gamers." 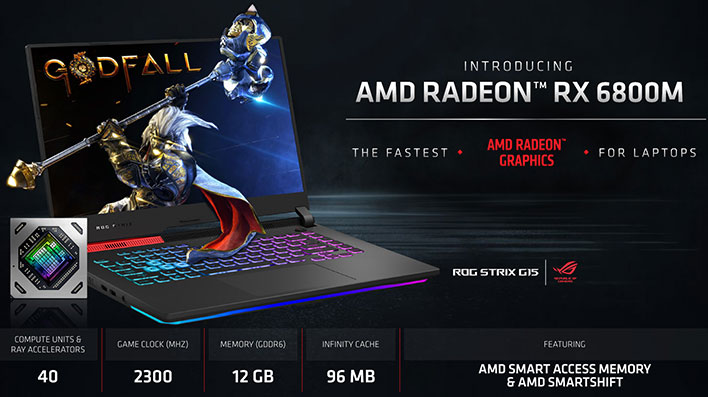 According to AMD, its flagship Radeon RX 6800M mobile GPU can deliver 120 frames per second at 1440p with a blend of raytracing, compute, and traditional effects.

In short, AMD is claiming performance parity or slightly better than an NVIDIA GeForce RTX 3080 in a similarly equipped ASUS ROG Strix SCAR laptop (which isn't likely the 3080's full GPU power envelope), but be sure to check out Marco's full deep dive review of the new ASUS ROG Strix G15 that is powered by this potent new AMD Radeon Mobile GPU, as that full reveal is live now with copious benchmark data.

How strong? According to AMD, it can push 100 frames per second at 1080p, making it a suitable choice for lightweight laptops. The caveat to these performance claims is that AMD did not mention any specific games or quality settings. Nevertheless, hitting triple digit frame rates at 1440p and 1080p on a laptop is enticing.
AMD also made a couple of other related announcements. One of them is what it calls the AMD Advantage Design Framework. This is the result of a multi-year framework between AMD and its hardware partners to deliver solutions that effectively go all-in with AMD. As in, pairing a Radeon RX 6000M GPU with a Ryzen 5000 series mobile processor, and other technologies. 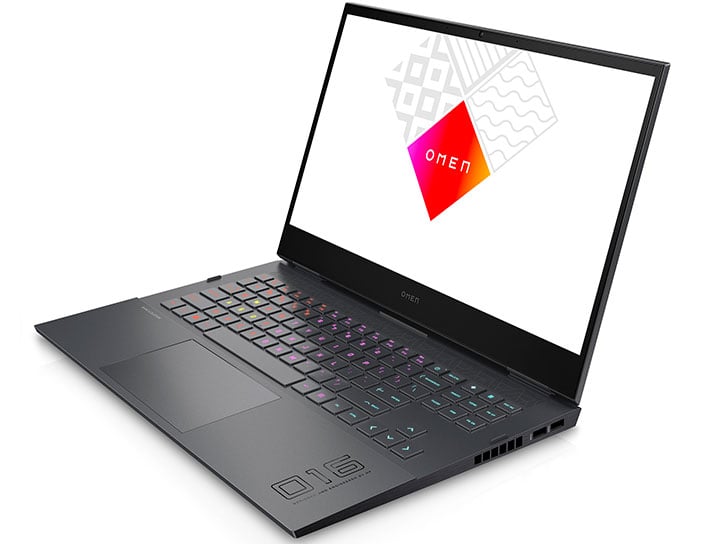 These laptops will also sport things like FreeSync Premium displays with a 144Hz or higher refresh rate and 300+ nits brightness, fast NVMe storage, and adhere to certain thermal designs and characteristics. AMD says Advantage laptops are optimized to hit 100 frames per second in "today's most visually demanding titles," as well as deliver all-day battery life for video playback (we imagine you'll still be best served plugging these laptops into a wall outlet for longer gaming sessions).

As expected, AMD also unveiled its FidelityFX Super Resolution (FSR) technology. Similar in concept to NVIDIA's Deep Learning Super Sampling (DLSS) technology, FRS is an upscaling technique, albeit an open source approach that yes, will work across platforms, theoretically even competitive GPUs from NVIDIA. AMD says it can boost frame rates by a factor of 2.5x in select games at 4K resolution.

"More than 10 game developers plan to integrate FSR into their top titles and game engines in 2021, with the first games supporting FSR expected to be available later this month," AMD says.

Look for AMD A+A Advantage laptops sporting Radeon RX 6000M hardware to arrive soon, including ASUS ROG Strix G15 and G17 models outfitted with a Radeon RX 6800M GPU and Ryzen 9 5900HX CPU, and an HP Omen 16 laptop with a Radeon RX 6600M GPU paired up with the same CPU. Similar laptops from Lenovo and MSI will be shipping later this year.