As much as we're excited to see Arc GPUs in the plastic flesh, the throw-down everyone wants to see in the latter part of this year is going to be Zen 4 versus Raptor Lake. AMD's upcoming processors will be its first generation to use DDR5 memory, but Intel's next chips will be its second with both the new memory and a hybrid architecture.

If you've been under a rock for the past six months, then let us fill you in: Raptor Lake is the codename for Intel's 13th-generation desktop processors. They'll primarily be a refinement of Alder Lake, with the biggest changes being the addition of up to eight more E-cores and a bump to 2MB of L2 cache per P-core. They'll even slot into the same motherboards, although as usual there will be a new set of chipsets and boards, too.


Intel hasn't even whispered a release window for Raptor Lake publicly, so we really don't know when the CPUs are inbound. Scuttlebutt has it that the chips are slated to show up in October. That's just a little over two months away, and so unsurprisingly, we're seeing an increased rate of leaks originating from folks fooling around with pre-release products.


Our story today is indeed one such leak. A fellow that does PC hardware news and reviews over on Bilibili by the name of "ExtremePlayer" laid hands on what appears to be a qualification sample (QS) for the Core i9-13900K. Naturally, he did what we would do in that situation, and slapped it down into his ROG Maximus Z690 Extreme motherboard and then benchmarked the dickens out of it.

In his review, ExtremePlayer tested the new chip directly against the extant Core i9-12900K. He comments that the 13900K comes out ahead of its previous-generation predecessor by around 10% on average in single-threaded tasks, and by about 35% in multi-threaded workloads. Those numbers line up very neatly with the predictions made by Moore's Law is Dead way back in February. 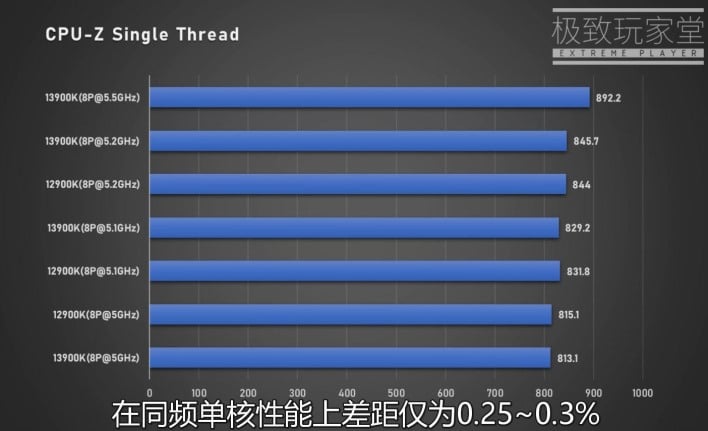 Most of the single-threaded performance boost in the applications that ExtremePlayer tested appears to come from the higher (5.5 GHz) boost clock of the Raptor Lake chip. Comparing the two processors at iso-clocks in the CPU-Z Benchmark, they perform essentially identically. Meanwhile, the multi-threaded gains likely result in large part from the addition of eight extra low-power E-cores.


Perhaps the most concerning part of ExtremePlayer's review is the image below, which is a screenshot of the monitoring panel in Intel eXtreme Tuning Utility (XTU). Using Intel's own stress test built into that same utility, the processor immediately shoots to 100ºC despite being underneath an AIO liquid cooler connected to a massive 360mm radiator. The core voltage droops significantly under load, which is particularly concerning for the amount of current passing through the VRM, as the package appears to be drawing as much as 420W.

The chip's high power consumption may be an artifact of the firmware on his ASUS ROG motherboard having improper settings for the unreleased processor. The voltage is slightly high compared to the Alder Lake processor, and it's also possible that the clocks aren't scaling correctly.


Of course, it's also possible that Intel's next flagship CPU will simply be an enormously power-thirsty 24-core beast. We'll have to wait until it releases to find out.
Benchmark images above sourced from ExtremePlayer via VideoCardz.