Intel's extant 12th-generation "Core" family processors, codenamed Alder Lake, are extremely fast CPUs by any standard. The single-threaded grunt of the "Golden Cove" P-cores combined with the multi-threaded capability offered by piling on quad-core packets of "Gracemont" E-cores gives them impressive performance in any workload.

Now, in most tasks, you'll find an Alder Lake CPU topping the benchmark charts. However, in certain multi-threaded tasks AMD's 16-core Ryzen 9 5950X can still come out ahead of Intel's own 16-core CPU. Indeed, for the last several generations, AMD's biggest strength next to its blue-tinged competition has been its willingness to sell customers a big pile of extra CPU cores.


Intel's clearly had enough of that business, because its 13th-generation Raptor Lake CPUs are doubling the number of E-cores on-die compared to Alder Lake. That means that a top-end Raptor Lake chip is going to ship with the usual eight Hyper-Threaded performance cores and then fully sixteen Gracemont Plus E-cores.

If you've wondered about the effect that such a configuration could have on multi-threaded performance, well, take a look at this leaked UserBenchmark result. Spotted by APISAK on Twitter, the result is for a Raptor Lake part with 24 cores and 32 threads, which should be the top configuration for the family.


Unfortunately, the result is in UserBenchmark, which isn't a great tool for actual performance testing. Still, we can compare it against the average results for a Core i9-12900K. The Raptor Lake part seems small but significant gains of 6-7% in lightly threaded tasks despite being marked down for a peak clock of 4.6 GHz, likely due to the increased L2 cache in its Raptor Cove P-cores.

The real change, as expected, comes in UserBenchmark's massively-parallel "64-core" tests, where it demolishes its predecessor with performance uplifts of up to 32%. There are surely more improvements than just the eight extra E-cores, but it's not hard to imagine eight extra cores giving such an uplift on their own.


The UserBenchmark listing also includes an Arc A770 graphics adapter, although it seems like it may not have had a functional driver installed, because the results for those tests were downright awful and probably not meaningful. The GPU was detected as having just 1GB of video RAM, so there's definitely funny business afoot. 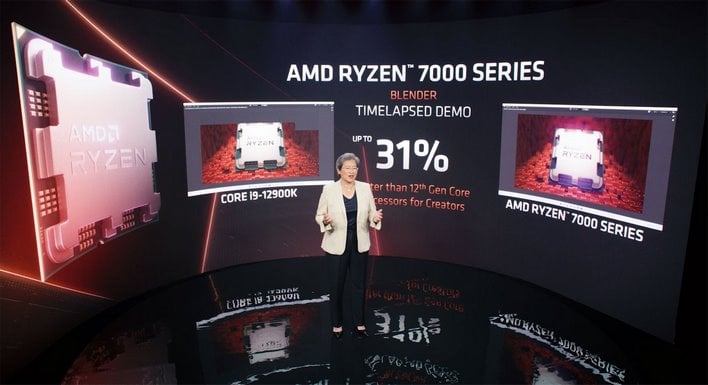 A 32% boost over the Core i9-12900K will allow this Raptor Lake CPU to flatten AMD's extant Zen 3-based processors even in multi-core tasks, but it's worth pointing out that AMD was touting a 31% increase in multi-threaded performance over the same Alder Lake CPU for its next-generation Zen 4-based "Raphael" processors. Of course, we expect that final Raptor Lake CPUs will run much faster than 4.6 GHz.

So saying, the showdown between Intel's 13th-gen "Raptor Lake" CPUs and AMD's Ryzen 7000 processors this fall is going to be explosive, and we are totally here for it. Isn't competition grand?