Barely more than a week ago, we heard through the grapevine that AMD had moved up its plans to launch its Zen 4 CPUs from Q4 of this year to Q3, and possibly as soon as August or July. The only source is frequent Twitter leaker Greymon55, but their information has been accurate many times in the past.

Perhaps adding credence to that rumor is today's tidbit that Intel is supposedly moving up its 13th-generation Raptor Lake desktop CPUs, too. This one comes from YouTube channel Moore's Law is Dead (MLiD), another frequent source of pre-release product information. In a video published yesterday, MLiD claims that Intel is pushing Raptor Lake forward a bit, from Q4 of this year to "late Q3."


He also released some information about the performance upgrades we can expect from Raptor Lake, compared to the extant Alder Lake. A multi-threaded performance gain of as much as 40% isn't super surprising considering that the top-end Raptor Lake SKU will supposedly ship with double the number of E-cores compared to its Alder Lake predecessor. 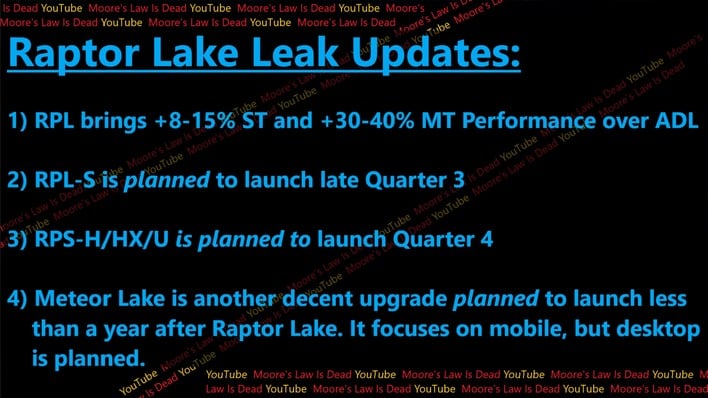 However, MLiD claims that the 13th-generation Core processors will also come with an 8-15% bump in single-threaded speed. That's pretty significant considering that, as far as we know, the "Raptor Cove" P-cores in Raptor Lake are nearly identical to the "Golden Cove" cores in Alder Lake. The boost could be extra clock rate from refinements to the Intel 7 process both parts are fabricated using, or it could come from the extra 768K of L2 cache allegedly attached to each Raptor Cove core.

MLiD goes on to state that Meteor Lake, the 14th-generation Core processors, will ship "less than one year" after Raptor Lake. That could be the real reason that AMD is supposedly rushing to release its next-generation hardware, as Meteor Lake is rumored to be another significant step up for Intel despite being the blue team's first tiled processors. With new CPUs from AMD and Intel as well as new GPUs from all three players, the back half of 2022 is going to be explosive one way or the other.