As excited as Intel is about Alder Lake, it hasn't shied away from spreading a few Raptor Lake bread crumbs on occasion. We know it will leverage an Intel 7 process node and arrive with up to 24 cores and 32 threads. Intel has also teased up to a double digit performance boost, and some leaked benchmarks indicate that will indeed be the case.
Raptor Lake won't be quite architectural overhaul over Alder Lake that Alder Lake was to Rocket Lake. In fact, Raptor Lake is confirmed to be socket-compatible with Alder Lake systems, which means you should be able to drop a 13th Gen Core processor into a 600-series motherboard with a BIOS update. This further suggest that Raptor Lake will support both DDR4 and DDR5 memory.

As Intel gets closer to launching Raptor Lake, the leaks are piling up. Earlier this month, for example, a 13th Gen Core i9-13900 CPU showed up in SiSoft SANDRA's database where it smoked Alder Lake by up to 50 percent in early benchmarks.

Impressive, but that was just the tip of the benchmark iceberg. Following up on that, a purported Core i9-13900 engineering sample (ES) that's in the wild has been put through quite a few more paces over at Expreview.
The Core i9-13900 represents a max configuration with 24 cores and 32 threads. This is comprised of 8 P-cores with Hyper Threading support and 16 E-cores, the latter of which is twice as much as found on Alder Lake.
Being an early sample, the chip is undoubtedly running at lower clocks than what the final silicon will hit. The ES chip is shown with a 1.4GHz base clock and 3.8GHz boost clock on the P-cores, while the E-cores ran at up to 2.8GHz. For comparison, the Core i9-12900 runs at 2.4GHz to 5.1GHz, so a 3.8GHz boost clock is pretty low here.
That's also not unusual for an ES chip. In any event, the rest of the test platform consisted of an a Z690 motherboard, 32GB of DDR5-5200 RAM, and a GeForce RTX 3090 FE graphics card. Both the Core i9-13900 and Core i9-12900 were tested in the same PC. To make it a more meaningful comparison, the site downclocked the Alder Lake part to 3.8GHz. 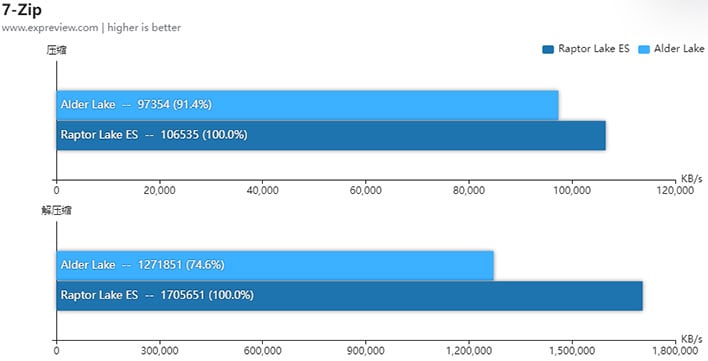 There were some big performance observed in benchmarks other than SiSoft SANDRA. In 7Zip, for example, the Raptor Lake part left Alder Lake in the dust in the Unzip test (bottom graph), and also beat it in the Compression test (top graph).
It also showed big gains in benchmarks like Corona 1.3, Belnder, and Cinebench (R23 and R20). Bear in mind that the Core i9-13900 has more cores to throw at workloads so it makes sense that multi-threaded performance would get a boost (to put these benches in context).
This is a solid early showing for Raptor Lake. Optimizations, mature drivers, and a new platform (700 series) could all combine to push the disparity even further when Raptor Lake ships. We'll see. In the meantime, you can check out the full set of leaked benchmarks.