Never mind that Alder Lake is just now beginning to get its feet wet in the consumer space, it's never too early to look at what is next. And what is next (barring a surprise shift in Intel's roadmap) is Raptor Lake. Perhaps suggesting that everything is on track for a 13th Gen Core processor launch next year, a Raptor Lake chip has made an appearance in an early benchmark leak.
Or very early, we should say, because it could be around a full year from now before Raptor Lake releases. Whatever the case might be, an apparent 13th Gen chip showed up in BAPCo's database for its cross-platform CrossMark benchmark. The performance results are unspectacular (which isn't surprising at this early stage), but what's interesting is the core configuration. 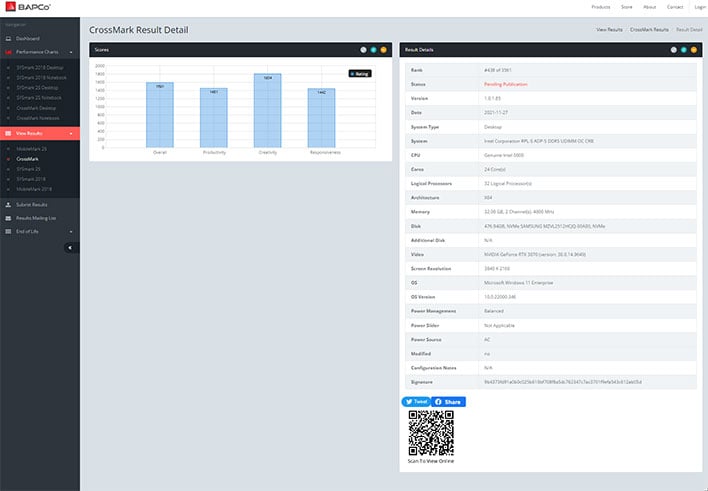 The chip is labeled simply as "Genuine Intel 0000" rather than listing an actual model designation. It's also identified as a Raptor Lake-S desktop CPU with 24 cores and 32 logical processors. Assuming BAPCo's benchmark is correctly identifying the makeup of the Raptor Lake engineering sample (ES), then it looks like Raptor Lake is set to see an increase in the number of efficiency cores (E-cores) compared to Alder Lake.
Alder Lake is offered with up to 16 cores and 24 threads, comprised of eight P-cores (Golden Cove) with Hyper Threading support paired up with eight E-cores (Gracemont) without Hyper Threading. Hence we have 8 (P-cores) + 8 (threads) + 8 (E-cores) = 24 threads in a full Alder Lake config (like the Core i9-12900K).

In comparison, the BAPCo listing highlights a Raptor Lake CPU (maybe the eventual Core i9-13900K) with 24 cores and 32 threads, comprised of eight P-cores with Hyper Threading support and 16 E-cores without Hyper Threading.
The list lends credence to a past rumor suggesting Intel will double the number of E-cores on Raptor Lake to 16, versus eight on Alder Lake. These are expected to be based on enhanced version of Gracemont, while the P-cores will get an architectural upgrade as well (Raptor Cove). Other rumored features include a larger bucket of L2 cache, faster clock speeds, and of course the usual IPC gains.
Regarding the leaked benchmark data, the entry was removed though not before the folks at Tom's Hardware could snap a screenshot, as shown up above. It shows the Raptor Lake chip scoring 1,591 in CrossMark. It just so happens that we ran the same benchmark with the same speed RAM (DDR5-4800) in our Alder Lake review. Here's how the scores align...
We glean absolutely nothing about performance from the early benchmark run with Raptor Lake, because unless something is seriously wrong, a fully-configured 13th Gen Core CPU is not going to get clobbered by its predecessor. The test platform could have been running at reduced clocks for all we know, plus everything else that could explain this result, such as this being a prototype platform (motherboard and chipset included) with immature drivers.
Leaked benchmark results will become more meaningful next year as we get closer to launch. For now, however, it's interesting to see an ES Raptor Lake chip seemingly confirm a substantial upgrade to its core configuration.