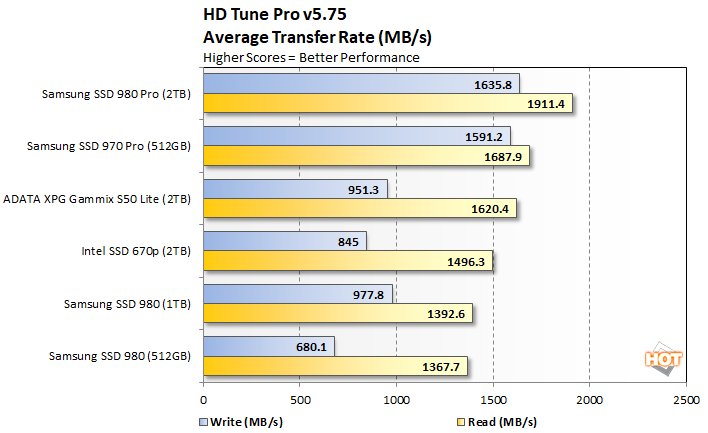 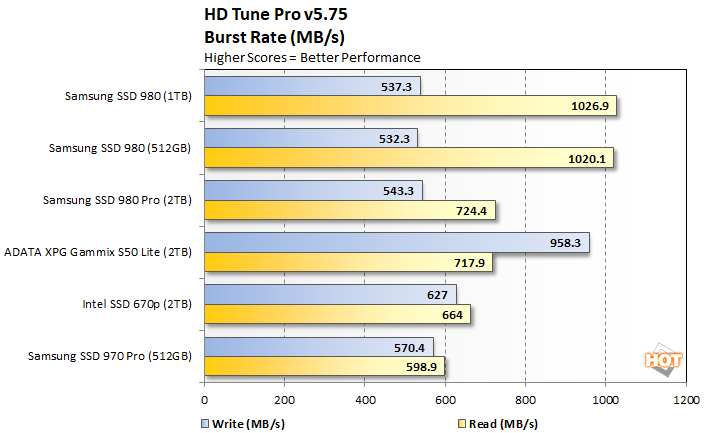 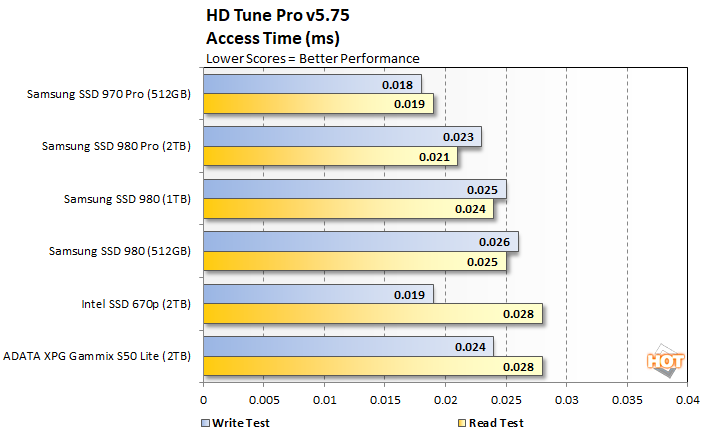 Sequential performance with the new Samsung SSD 980s trailed the rest of the drives overall, though we should point out that the 1TB model's write performance put it in third place, behind only the "Pro" series Samsung SSDs. Burst rates for the SSD 980 were strong, however, as were access times. Though IOMeter showed higher access times than expected, with HDTune's workload the Samsung 980s had some of the lower access times in the read tests. Writes were somewhat higher, but still in the mix. 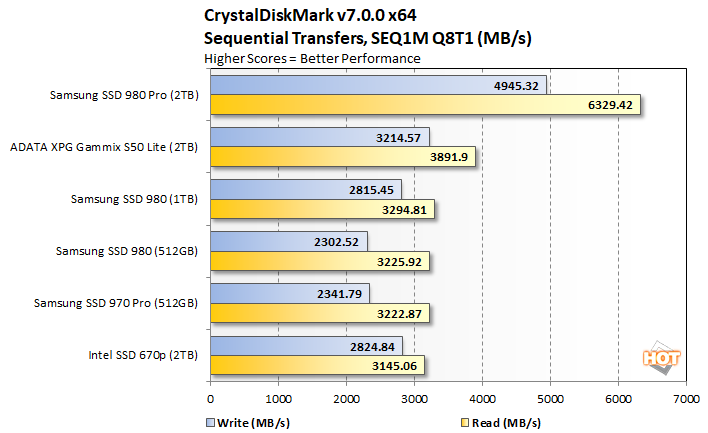 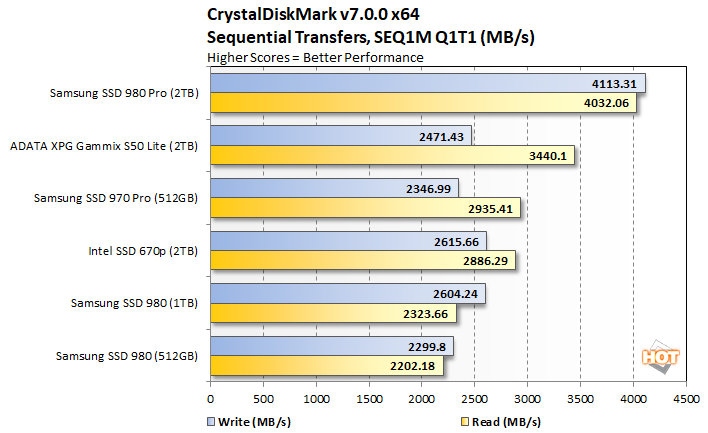 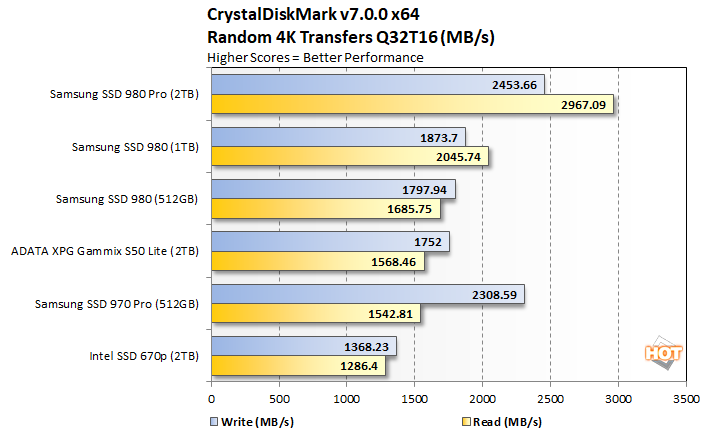 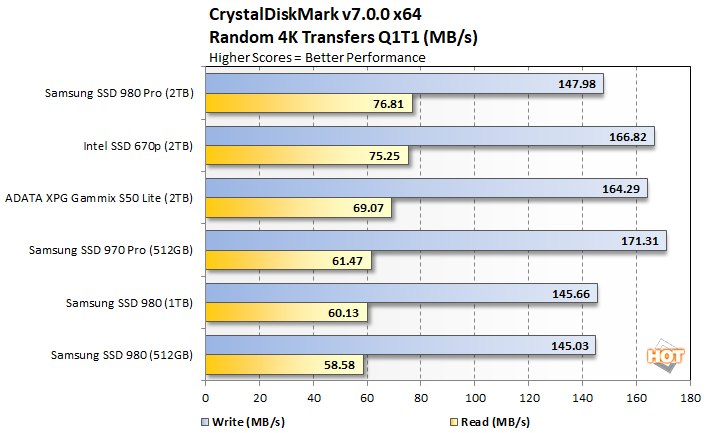 In CrystalDiskMark's sequential tests, the Samsung SSD 980s are competitive with the other PCIe Gen 3 drives, but the PCIe Gen 4 drives from Samsung and ADATA lead overall. In the random 4K transfer tests, the Samsung 980 drives finish much higher in the stack at QD32T16, but drop to the bottom of the list at QD1T1.

Despite lacking any on-drive DRAM cache to boost performance, the new Samsung SSD 980 drives performed relatively well in the trace-based PCMark 10 tests. Here Samsung's new mainstream SSDs finish right in the middle of the pack, behind the high-end SSD 980 Pro and Intel's just-released 670P, but well ahead of the ADATA drive and older Samsung SSD 970 Pro. Bandwidth and access times for the Samsung SSD 980s are more competitive here than our previous synthetic benchmarks had suggested.

The suggested pricing for Samsung SSD 980 series is competitive and commensurate with the drives’ performance levels. Samsung's MSRP is $49.99 for the 250GB drive, $69.99 for the 500GB drive and $129.99 for the 1TB drive, which translates to about $0.20 - $0.12 per GB (with the 1TB drive offering the highest value). At those prices, the Samsung SSD 980s are not the cheapest PCIe Gen 3 mainstream NVMe drives on the market, but it does put them in the mix with some of the most affordable drives out there. As has been the case with most of Samsung's mainstream SSDs, we expect street prices to settle in somewhat lower than MSRP, which will only help the drives' value proposition. 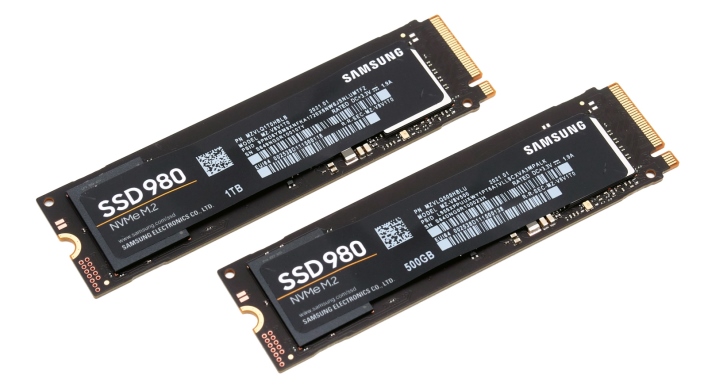 
Perusing the numbers, the Samsung SSD 980 drives we tested aren't benchmark-busting barn-burners. Considering the Samsung SSD 980's affordable suggested pricing, good endurance and 5-year warranty, however, along with their competitive performance and access time in the trace-based tests, we think Samsung has hit its intended target with this new family of Solid State Drives. For a mainstream system builders on a budget, the Samsung SSD 980 series drives are worth checking out.