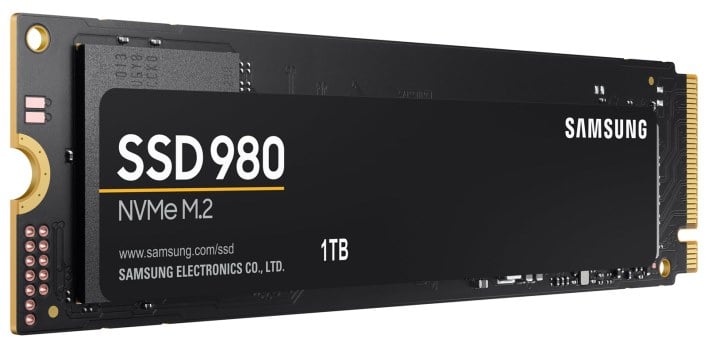 Although the company just recently fleshed out its flagship line of PCIe Gen 4 NVMe solid state drives with the 2TB SSD 980 Pro, Samsung is already back at it, with yet another family of drives that target a different market segment. While the Samsung SSD 980 Pro is intended for workstations types, performance enthusiasts and gamers that crave nothing but the best, the new Samsung SSD 980 drives – sans “Pro” – we’ll be showing you here today, target more mainstream computing applications.

The branding of the new Samsung SSD 980s may be reminiscent of their higher-end counterparts, but rest assured the two series of drives are quite different. Samsung SSD 980s have PCIe Gen 3 interfaces and they feature a lower-cost, DRAM-less design. Take a look at the high-level features and specifications for yourself, and then we’ll dig in a little deeper, explain what makes Samsung SSD 980 drives tick, and ultimately see how they perform... 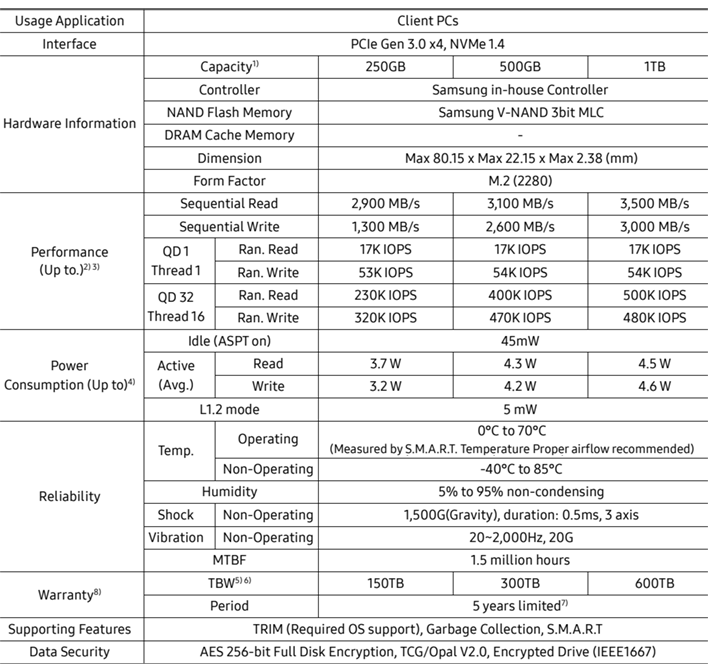 Find Samsung SSD 980 Solid State Drives @ Amazon
The new Samsung SSD 980 series of drives will initially be offered in three capacities, ranging from 250GB on up to 1TB. We’ve got 500GB and 1TB drives on hand for testing here. 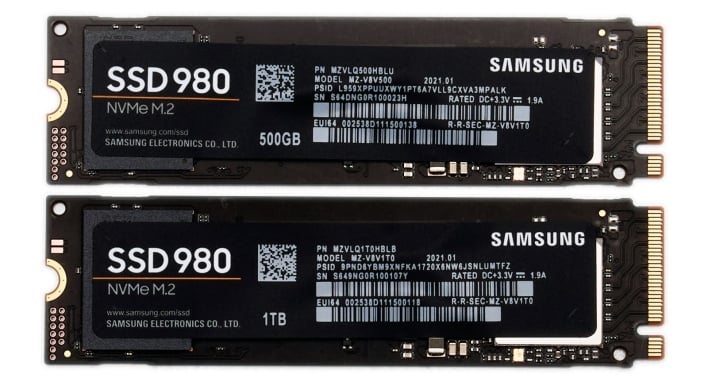 All of the drives in the Samsung SSD 980 series have the same M.2 (2280) "gumstick" form factor, but performance varies greatly depending on the drive's total capacity. The 250GB drive is rated for 2.9GB/s reads with 1.3GB/s writes, while the larger 500GB drive features up to 3.1GB/s reads and double the write performance at up to 2.6GB/s. The 1TB drives steps things up a notch further with 3.5GB/s and 3GB/s reads and write, respectively. Random IO operations also vary depending on the capacity, though random reads and writes at QD1 are similar across the line-up, at 17K (reads) and 53-54K (writes) – it’s at QD32T16 that the drives exhibit much larger deltas. 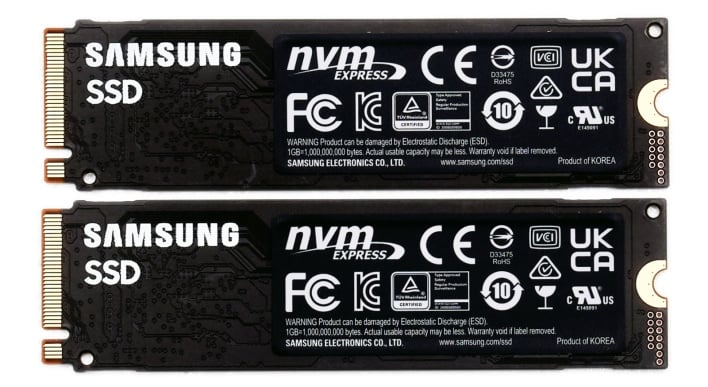 All of the drives in the SSD 980 series feature Samsung’s sixth-generation 3-bit per cell 1xx-layer TLC V-NAND and a proprietary Samsung controller. The controller has a native PCIe gen 3 interface and supports the NVMe 1.4 protocol. Other details are scarce on the controller, but Samsung claims it has the same improved thermal characteristics of previous gen offerings, thanks to a nickel coating on the controller that helps to dissipate heat and the DTG (Dynamic Thermal Guard) algorithm incorporated into the firmware that helps the drives better manage long, sequential transfers and mitigate thermal saturation. Samsung claims SSD 980 drives are up to 56% better than its 970 EVO SSDs at managing thermals over long, sustained workloads. 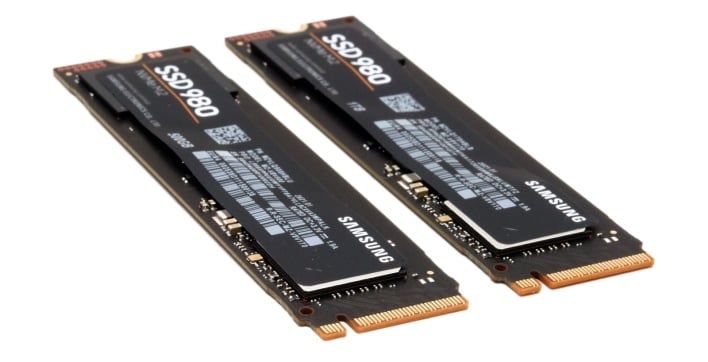 Something different with the Samsung SSD 980 series of drives is support for Host Memory Buffer (HMB) technology. In lieu of an integrated, dedicated DRAM cache, these drives leverage HMB, which affords them direct access to system memory. They use a portion of system memory as a buffer to improve performance, and eliminating the integrated DRAM help drives costs down.


Like its last few generations of solid state drives, the new SSD 980s feature TurboWrite 2.0 technology. TurboWrite uses a small portion of the drive’s NAND as an SLC write buffer, which translates into improved write performance, as long as the buffer isn’t exhausted.

The TurboWrite 2.0 buffer sizes for all of the drives in the Samsung SSD 980 family are defined in the chart above. As you can see, the total and “intelligent” capacities remain the same size on the drives, which Samsung notes are many times larger than the buffers on the 970 EVO family.

What those TurboWrite 2.0 buffer sizes mean in terms of performance, is outlined in the HDTune write results posted above. This test will write data across the entire capacity of the drive and will eventually utilize the entire buffer. On the 1TB drive, the larger Turbowrite 2.0 buffer is able to maintain peak performance until about the 600GB mark, at which point performance drops off. The 500GB drive shows similar behavior, but its performance dips at around 175GB written. TurboWrite 2.0 should allow the SSD 980 series to perform well in the vast majority of consumer-class workloads. Even those users that frequently work with large, sequential transfers aren’t likely to be moving files larger enough to exhaust the write buffers all that often. 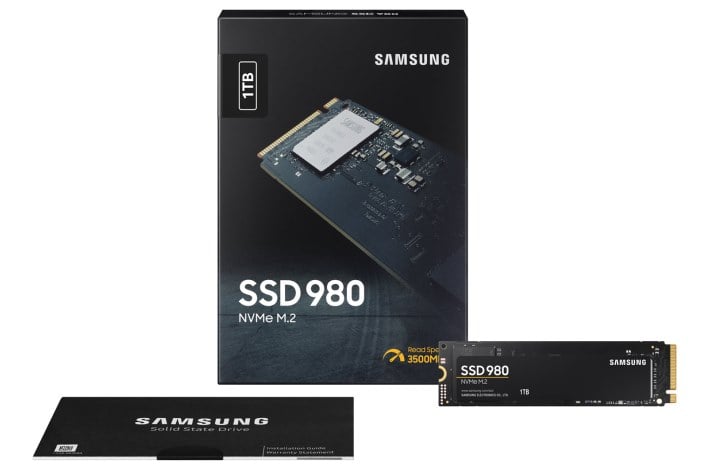 Samsung SSD 980 series power consumption characteristics also vary based on capacity, but L1.2 sleep mode should be around 5mW on all of the drives, and during active reads and writes, power falls within the 3.2W – 4.6W range, with the highest capacity drives obviously using more power.

Samsung warranties the SSD 980 series drives for 5 years, which is thankfully becoming more common with consumer-class SSDs and endurance is rated at 150TBW per 250GB of capacity, which is better than most mainstream SSDs. Support for the drives has also been added to Samsung's Magician software suite and includes a new feature as well. There is a ‘Full Power Mode’ feature added to Magician v6.3, that allows the drives to maintain peak performance and not drop into deep idle state, when gaming for example. 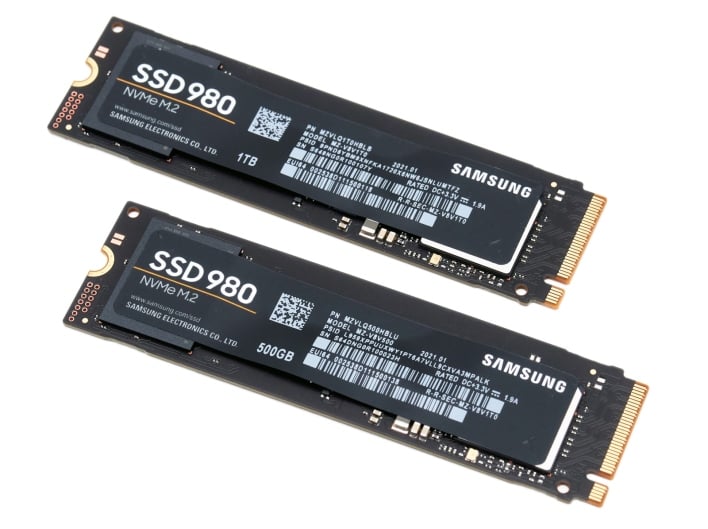 In all test runs, we rebooted the system, ensured all temp and prefetch data was purged, waited several minutes for drive activity to settle and for the system to reach an idle state before invoking a test. Also note, we have completely revamped our test bed, so the numbers shown in this evaluation aren’t comparable to previous articles. All of the drives here have also been updated to their latest firmware and where applicable. 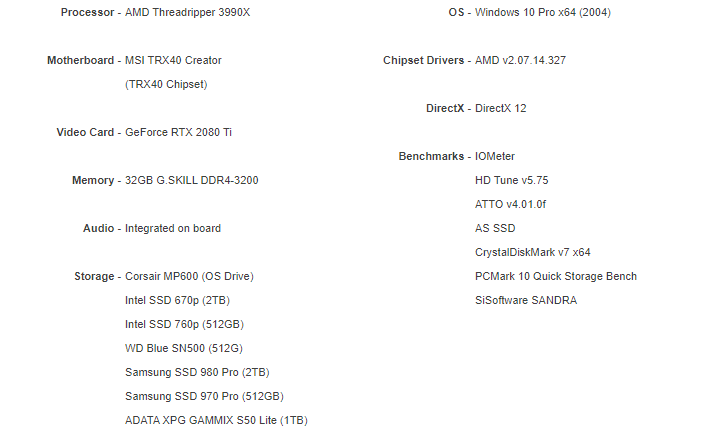 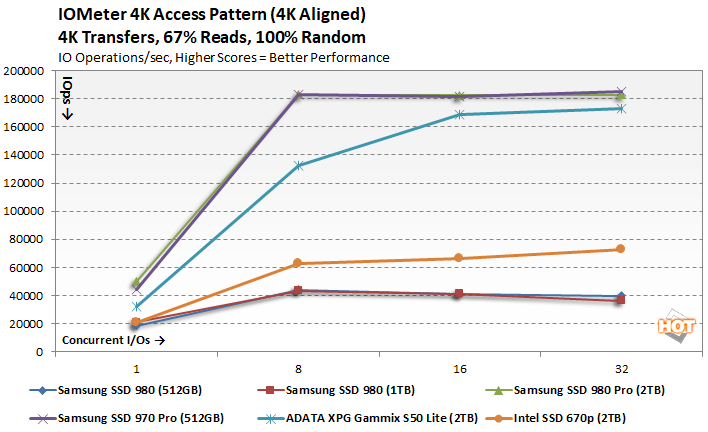 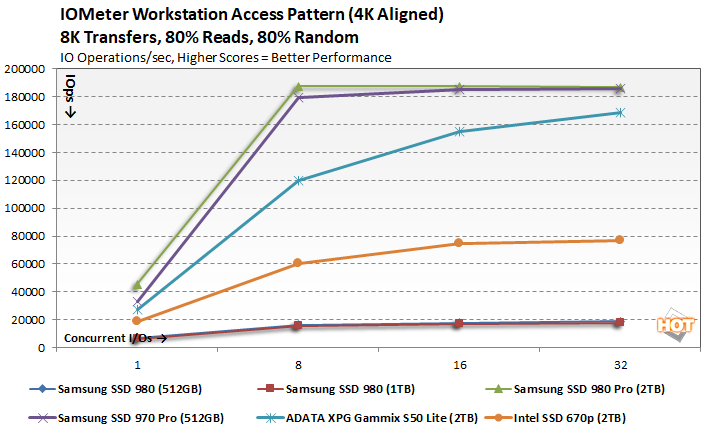 The Samsung SSD 980s trailed all of the other drives we tested across the board with both of the IOMeter access patterns we tested. The 8K mixed workload tests showed the largest disparity regardless of queue depth, but in the fully random 4K test at QD1 -- which is arguably the most important metric for consumers, the Samsung 980s finish right on top of the recently-released Intel SSD 670p. 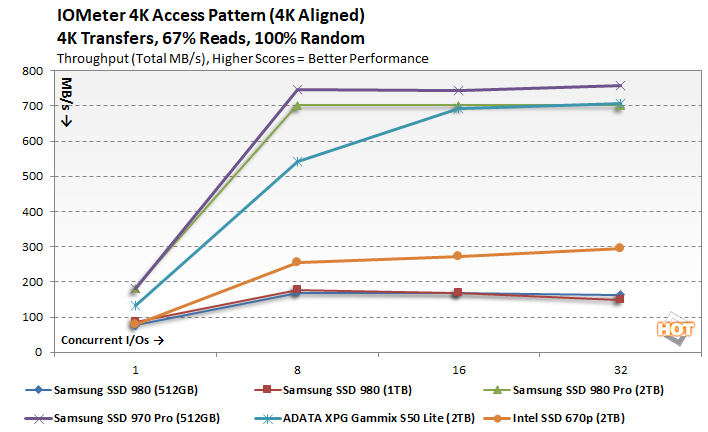 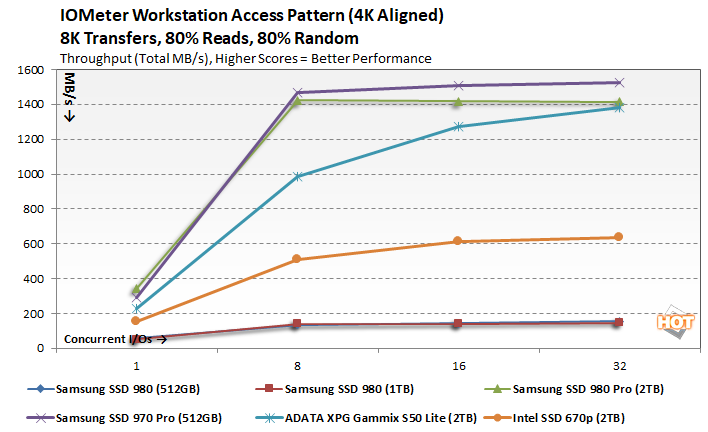 The actual bandwidth results with both access patterns reflect the lower IOPs, and as such, the new Samsung SSD 980s end up trailing across the board. 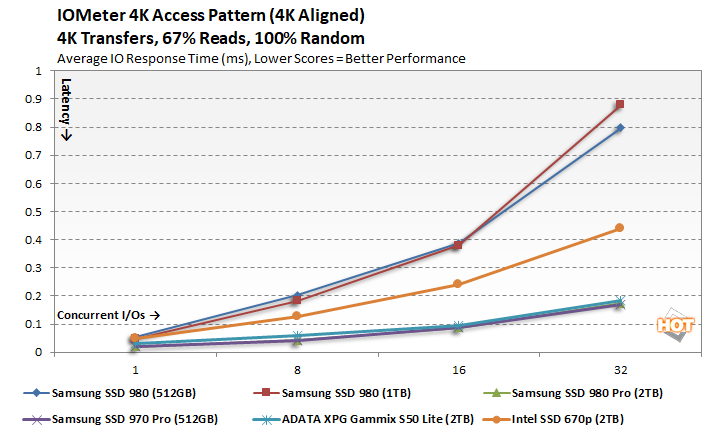 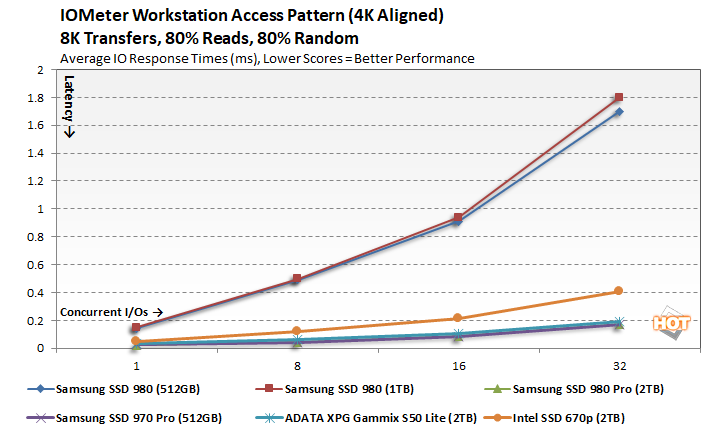 The latency characteristics of the Samsung SSD 980 drives also trailed the other drives we tested (lower is better here) save for the fully random 4K result at QD1 where things were tightly grouped. 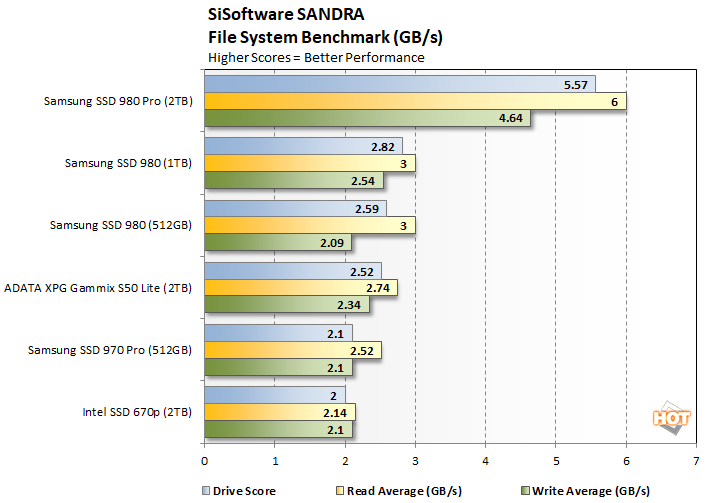 The new Samsung SSD 980 drives performed well in the SiSoft File System bandwidth test. Here, the 1TB Samsung SSD 980 trailed only the higher-end (much pricier) PCIe Gen 4 980 Pro. The 512GB drive ranks well overall as well, but its average write score was actually the lowest of the bunch. Its strong read performance is what pushed it up the stack. 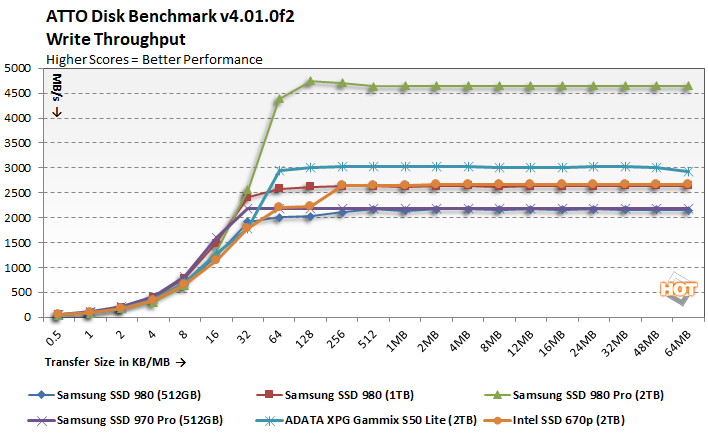 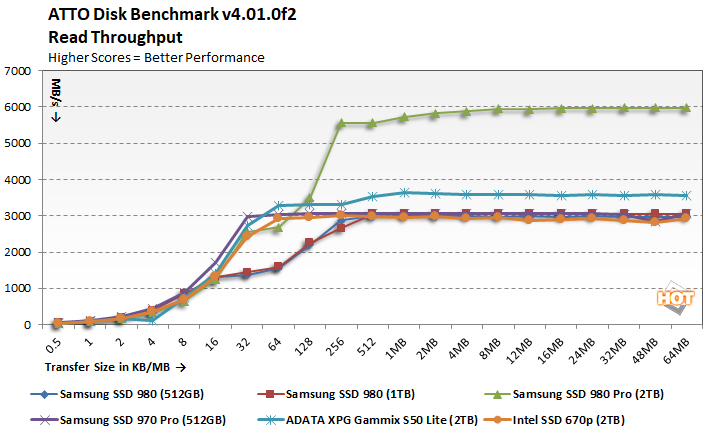 The Samsung SSD 980 drives finished right about in-line with the other PCIe Gen 3 drives we tested in the ATTO read and write bandwidth tests. Neither drive hit their rated peak bandwidth, but performance was competitive nonetheless. 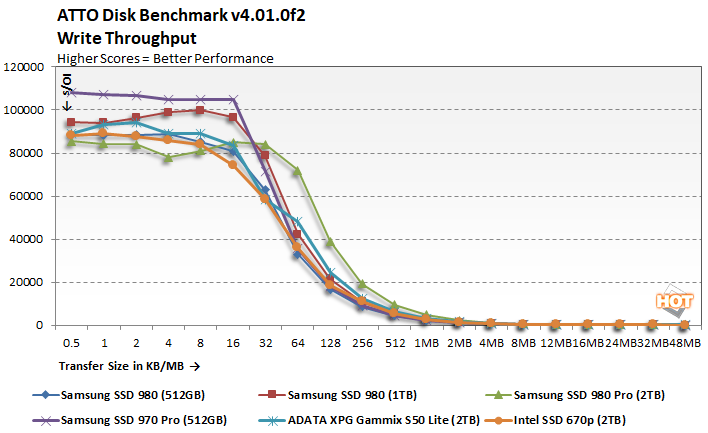 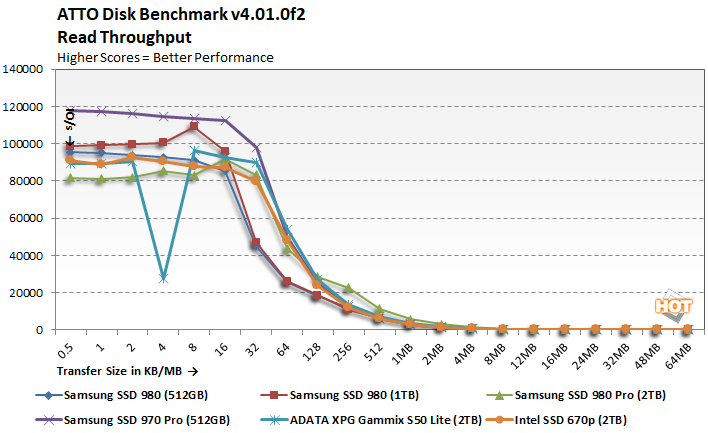 IO performance according to ATTO was also competitive with the Samsung SSD 980 drives. The 1TB model's increased write performance pushed it somewhat higher in the rankings, but the PCIe Gen 3 drives are all grouped tightly. 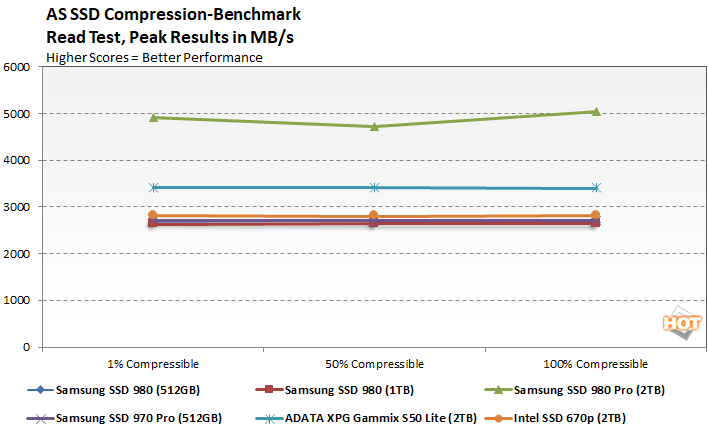 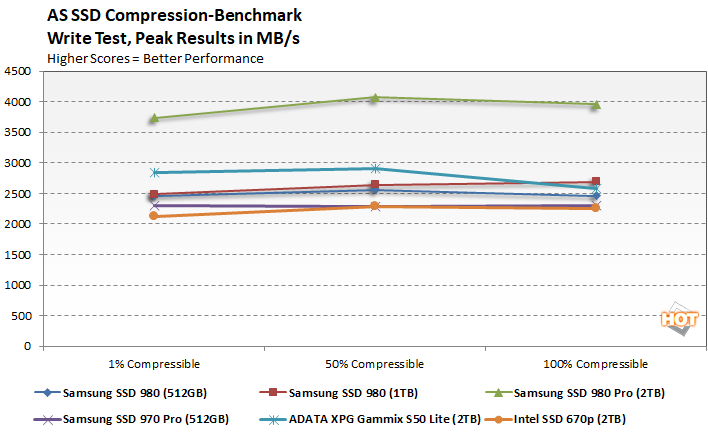 The compressibility of the data being transferred across the drives has little impact on the drives' average write speeds. We should note, however, that the Samsung SSD 980s exhibited a pronounced sawtooth pattern in the write tests here, likely due to the benchmark's particular workload, but when averaged out across runs, the impact is minimal.