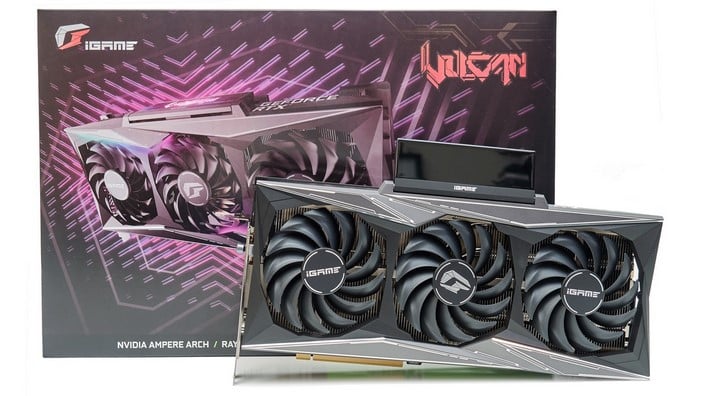 NVIDIA’s board partners have released a wide array of GeForce RTX 30 series cards, with various form factors, aesthetics and differentiating features. Some use higher frequencies to entice gamers and enthusiasts, while others are crammed with flashy lighting or over-the-top cooler designs. The Colorful iGame GeForce RTX 3060 Ti Vulcan OC-V we’ll be showing you here today seems to target virtually every type of enthusiast. Whether you’re after peak performance or wild aesthetics, this card has you covered. Factory overclocked? Check. User-Addressable RGB lighting? A high-performance cooler? An adjustable, customizable, built-in LCD? Check, check, and check.

The Colorful iGame GeForce RTX 3060 Ti Vulcan OC-V is one of the wildest, air-cooled GeForces we have come across. And as you’ll see in just a bit, its performance is quite strong too. Take a gander at its main features and specifications below and then we’ll dig in deeper and take a much closer look...


Find GeForce RTX 3060 Ti Cards @ Amazon
If you’d like the skinny on NVIDIA’s GeForce RTX 3060 Ti, we recommend checking out our launch coverage. We cover all of the GPU’s specifics in that piece and test one of NVIDIA’s Founder’s Edition models (along with a card from MSI).

To quickly recap, however, the GeForce RTX 3060 Ti features the same GA104 as the GeForce RTX 3070, but scaled down a bit to hit a lower price point. The GA104 is fabricated on Samsung’s 8nm NVIDIA custom process, is comprised of approximately 17.4 billion transistors, and has a die size of 392.5mm2. Although the GPU in its full configuration has 48 Streaming Multiprocessors (SM), 38 are enabled on the GeForce RTX 3060 Ti, versus 46 SMs on the RTX 3070.

In its stock configuration, the iGame GeForce RTX 3060 Ti Vulcan OC-V has similar frequencies to NVIDIA’s reference design, but when in OC mode, the typical boost clock is 1,815MHz. During real-world use, however, we saw boost clocks that were usually much higher. Entering OC mode on this card doesn’t take any special magic either. Nested at the top of the case bracket, is a button for simple one-touch overclocking. The button also lighted to indicate that overclocking has been enabled. And there’s really no reason NOT to leave it enabled, unless you’re trying to save a few pennies a year on electricity. This card’s cooler is quiet and capable of keeping temperatures in check whether in OC mode or not.

Speaking of the cooler, the iGame GeForce RTX 3060 Ti Vulcan OC-V is outfitted with a large heatsink with a nickel-plated copper vapor chamber, that’s linked to heatsink fins via five 8mm heat-pipes. The vapor chamber makes direct contact with the GPU, but memory and VRM at actively cooled as well. Triple axial fans are mounted above the heatsink and blow air downward on the whole assemble.

The fans are nestled in an angular shroud with sharp, aggressive lines all around. The back-side of the card is adorned with a metal heat / reinforcement plate as well, which also has a lighted cut-out off to the side. The whole assembly is relatively large for a 3060 Ti, at 323x158x60mm and three-slots wide.

In addition to the oversized cooler, the iGame GeForce RTX 3060 Ti Vulcan OC-V has another stand-out feature along the top edge of the card. Mounted squarely in the middle of the shroud is a small LCD. 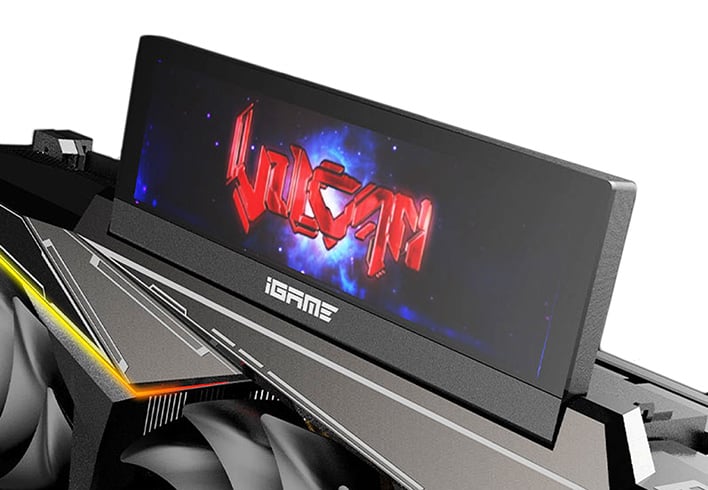 The LCD has a resolution of 480x128 and it rests on a hinge that can rotated 90 degrees so the screen remains visible whether the card is mounted vertically or horizontally. Out of the box, the display shows a stylized “Vulcan” logo, flying through a star field, but it is fully user-customizable as well. A USB cable is included with the card, that can be attached to an open header on a motherboard. And using Colorful’s iGame Center software, users can configure the LCD to display real-time hardware health data, JPGs or animated GIFs. The iGame Center software is also used to adjust the RGB lighting on the card. 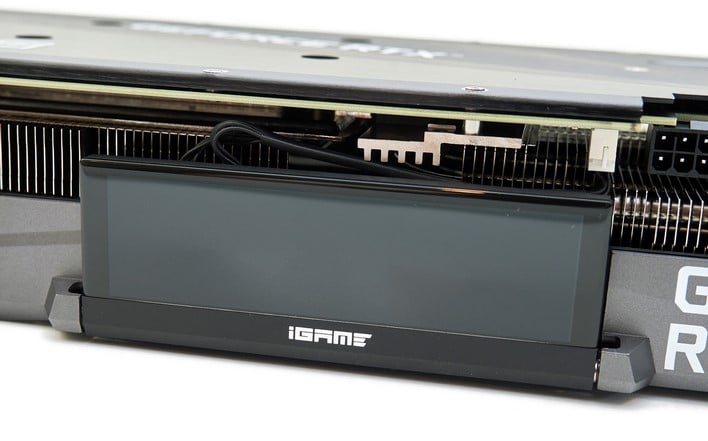 There are triple 8-pin PCI Express power connectors on the card, which – again -- is a lot for a GeForce RTX 3060 Ti, along with 14+4 power phases for the GPU and memory. Whether running in stock or overclocked mode, the iGame GeForce RTX 3060 Ti Vulcan OC-V will not be starved for power (though more extreme overclocking is still power limited like most other GeForces).

With such an over-the-top card, it’s no surprise Colorful includes some useful goodies with it as well. Along with the card itself, Colorful throws in the aforementioned USB cable to manage the built-in LCD, an cable to sync the card’s lighting to your motherboard, and an adjustable reinforcement stand / bracket, to provide some additional support, minimize sag, and reduce pressure on the card’s PCI Express slot. 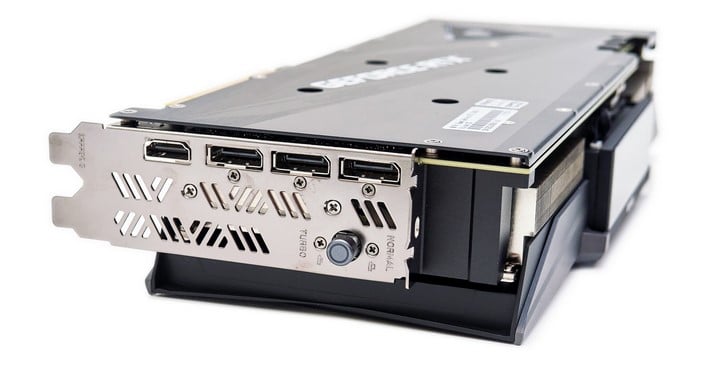 Similar to the vast majority of RTX 30 series cards we've already evaluated, the iGame GeForce RTX 3060 Ti Vulcan OC-V has triple full-sized DisplayPorts (1.4a) and a single HDMI output. And that HDMI port is v2.1 compatible, which enables 4K120P with G-Sync on some of the latest OLED TVs and displays, as well as 8K resolution over a single cable.

Now, what do you say we see how this baby performs?