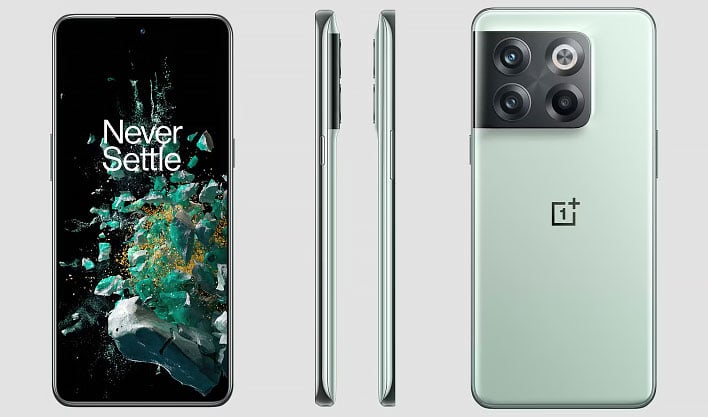 The OnePlus 10T is limited to sub-6GHz 5G, which seems a little odd for a phone so obsessed with speed. While millimeter wave 5G is fussy and not always readily available in most areas, it can be blazing fast under the right circumstances. Having access to these networks on the 10T would have been another speedy feather in its cap. That said, sub-6 heavy networks like T-Mobile are getting faster every day, capable of putting up multiple-100mb speeds...

Anecdotally, the 10T has maintained a very robust connection for us while testing on T-Mobile. We conducted voice calls over cellular and Wi-Fi, and the audio quality was clear on both ends. There are some places where I see some phones fail to hold onto a 5G signal, but the 10T was able to stay connected. OnePlus says it engineered a new 360-degree antenna array that completely encircles the device. So, no matter how you hold it, the 10T should have solid connectivity.

The 10T has a stereo speaker setup—one on the bottom edge in concert with the earpiece. Audio quality is fine for games and YouTube videos, but it's too flat to truly enjoy music. As is the case on most phones with this speaker arrangement, sound is somewhat imbalanced, with the bottom-firing speaker noticeably louder than the earpiece.

OnePlus is making a big deal of the performance tuning of this device, what with the new cooling solution and gaming engine. Anecdotally, it does feel like a very fast device, and it doesn't throttle or get as toasty as phones with similar hardware like the Galaxy S22. However, the 10T has the Snapdragon 8+ Gen 1, which is a skosh faster than the previous gen Snapdragon 8 Gen 1. The benchmarks mostly support that. 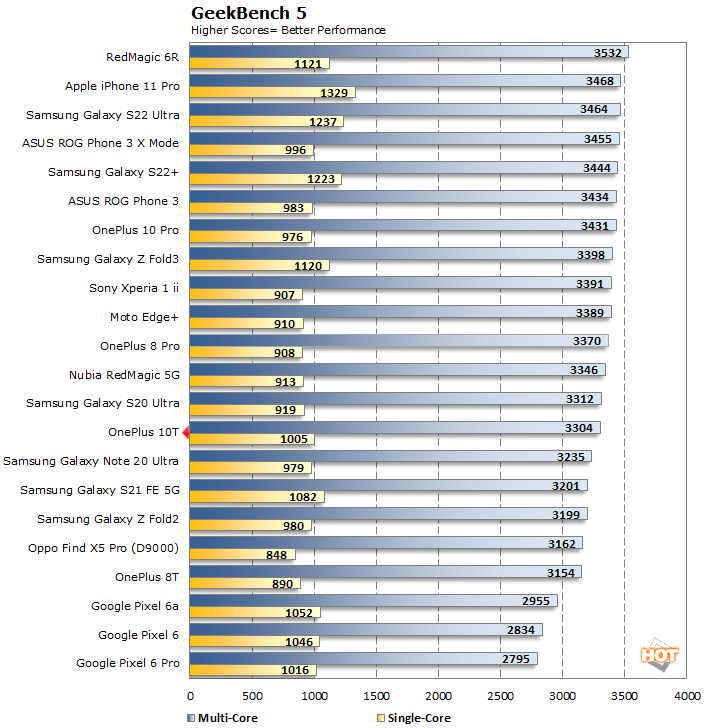 Geekbench is not always the most informative benchmark as it's completely synthetic and OEMs are known to optimize for it. That said, it can be a useful data point. Here, the 10T is not leading the pack in any one area, falling behind phones like the Galaxy S22, but it beats Google's latest Pixels. 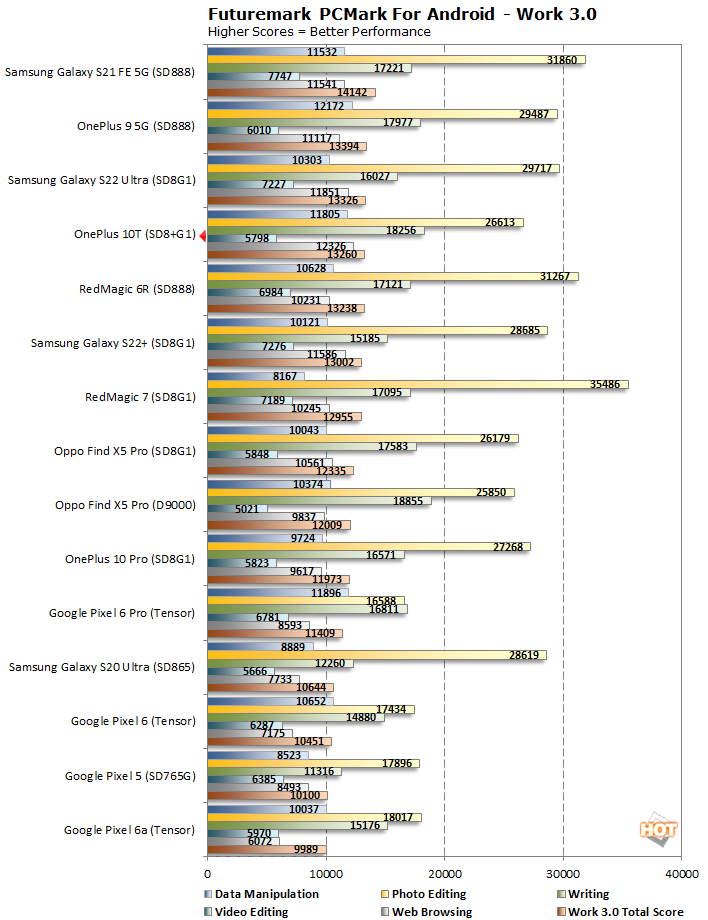 The OnePlus 10T scores roughly the same as the Galaxy S22+, but it beats the 10 Pro by a comfortable margin here, and ranking far into our upper quadrant of results. 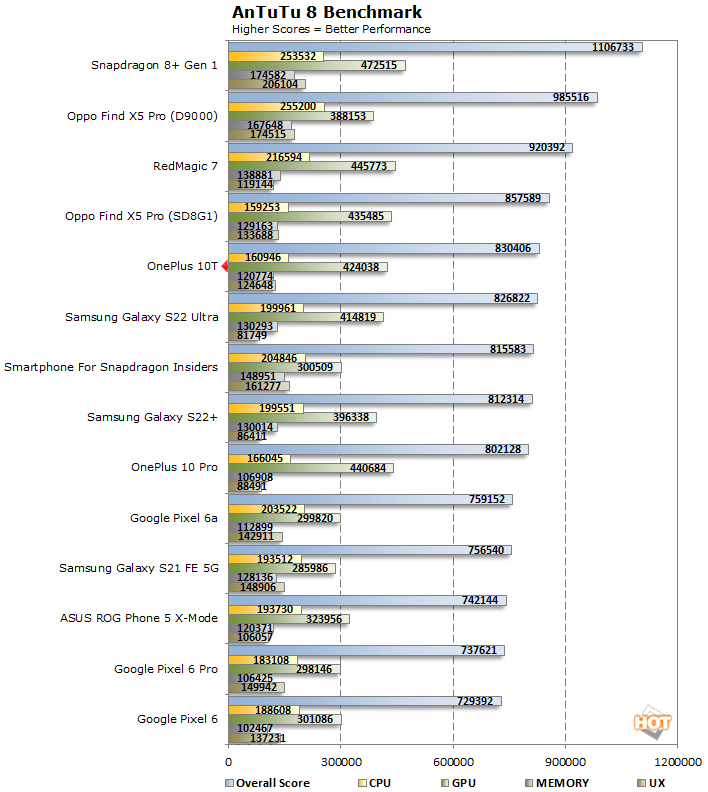 The OnePlus 10T fares better in AnTuTu than most phones we've tested. It edges out Samsung's latest flagships, and the numbers are a substantial improvement over the OnePlus 10 Pro. However, the 10T's scores are weaker than the Snapdragon 8+ Gen 1 refence, which still leads the pack. 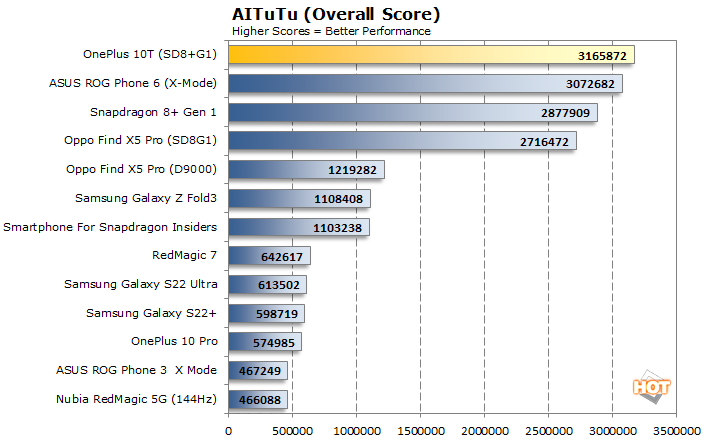 We've seen Qualcomm's latest chips put up impressive scores in general machine learning tests like AiTuTu, even compared to Google's AI-optimized Tensor. It's the same story with the 8+ Gen 1. The 10T put up the best scores we've seen yet in this test.

Next we're checking how the OnePlus 10T compares in GFXBench, which has been one of the standard mobile graphics/gaming performance benchmarks for years. To ensure that display refresh (v-sync) and resolution aren't limiting factors, we're comparing off-screen test results here. GFXBench tests OpenGL ES graphics workloads and we're specifically testing OpenGL ES 2.0 and 3.0. 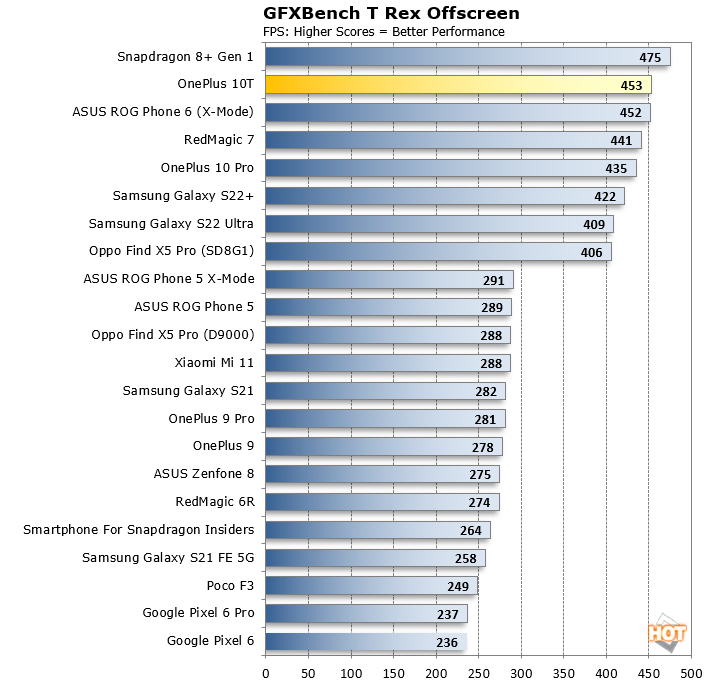 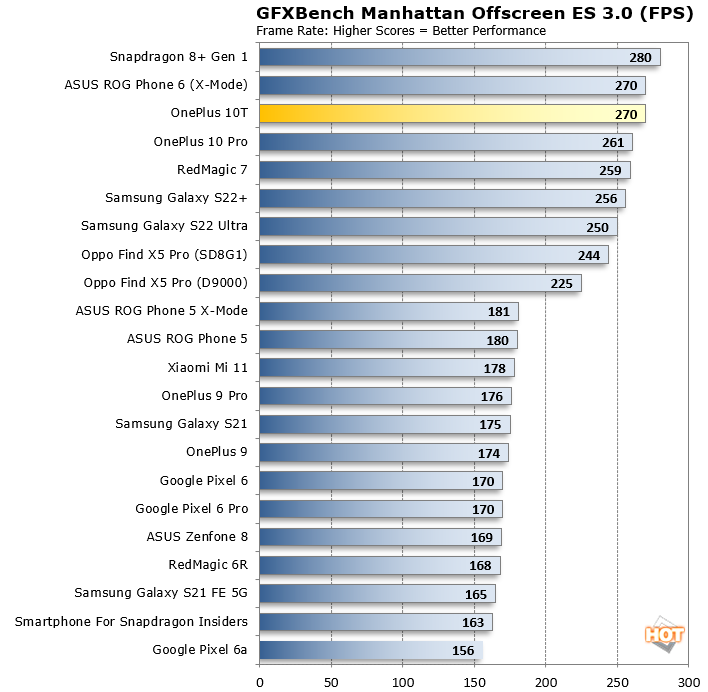 The OnePlus 10T was among the best performers in the T-Rex benchmark, falling just short of Qualcomm's Snapdragon 8+ Gen 1 reference device, and it's the same story in the Manhattan test. The Aztec Ruins test is newer and we have fewer points of comparison, but the 10T did put up one of the best scores we've seen so far from a retail phone—clearly, OP's gaming optimizations are the real deal. 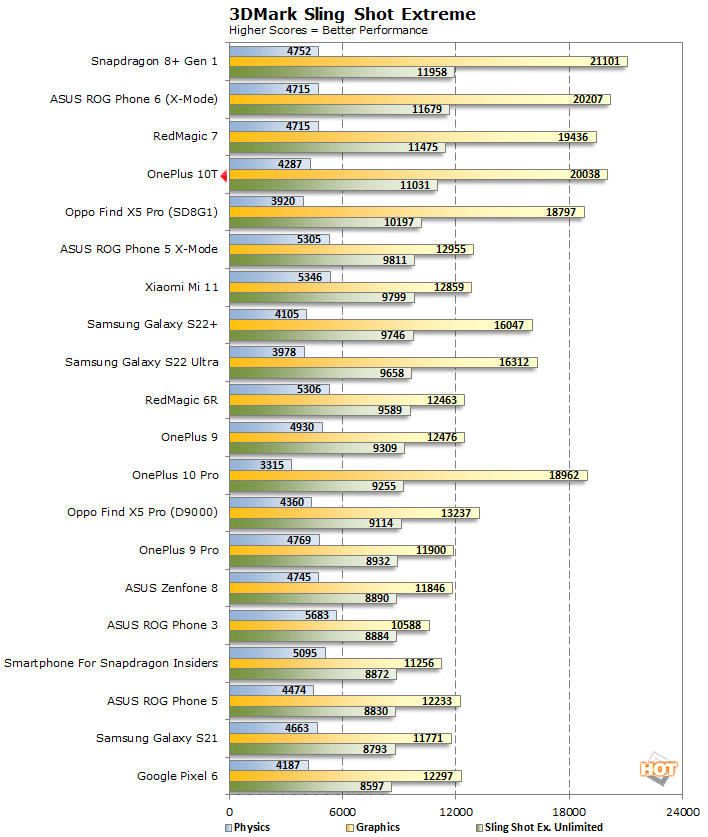 Here the OnePlus 10T chalks-up another near top of pack win, with the top 4 devices we've tested all tightly grouped in this gaming test. 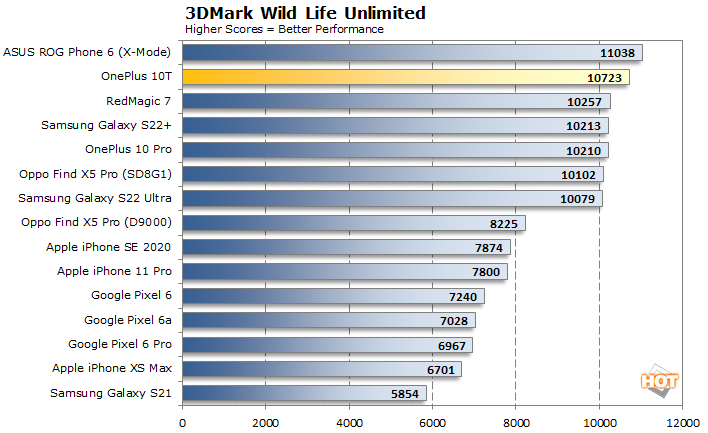 Again, the OnePlus 10T took the competition to the cleaners in this test. It managed one of the highest scores yet, just slightly lower than the maxed-out ROG Phone 6. More interesting, the stress test below shows the benefits of OP's new cooling system.

While most phones slow down significantly after a few loops in the Wild Life Stress Test above, the 10T only bleeds off a small amount. It should be great for long gaming sessions or extended heavier workloads.
PREV PAGE NEXT PAGE