Qualcomm Snapdragon 8+ Gen 1 Benchmarks: Faster At Everything With Better Efficiency

Qualcomm is updating its mobile platforms with a couple of enhanced SoCs, including the Snapdragon 8+ Gen 1 for flagship Android phones, and the Snapdragon 7 Gen 1 for premium handsets that fall just a step below. As it happens, we had the opportunity to preview the performance of the former and spoiler alert, it's fast. We'll get to precisely how much of a performance uplift it delivers over the Snapdragon 8 Gen 1, but first let's go over some of the specs and features.
For anyone who's been following the mobile scene for some time, the Snapdragon 8+ Gen 1 seems like an inevitable release. For the past few generations, Qualcomm has released 'Plus' variants of its flagship silicon as stepping stones to an eventual architectural upgrade. These typically entail faster clocks and other enhancements, as is the case here. 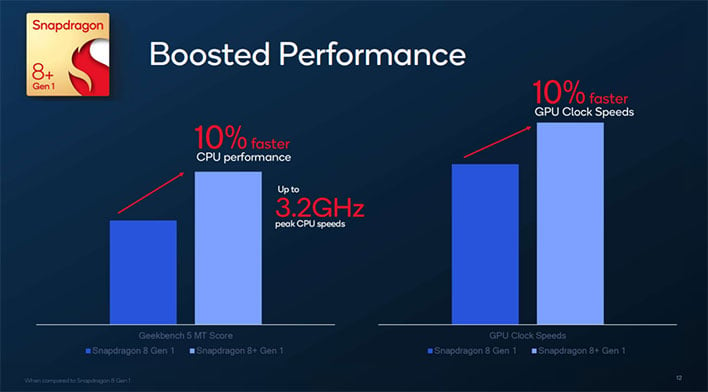 The Snapdragon 8+ Gen 1 maintains the same Kryo CPU complex in a 1+3+4, with a single Prime Cortex-X2 core, three Cortex-A71 Performance cores, and four Cortex-A51 Efficiency cores. However, the peak clock on the Cortex-X2 core has been goosed to 3.2GHz, a 200MHz increase over the non-Plus variant. While not disclosed, from what we can tell, the Performance cores now go up to 2.75GHz (up from 2.5GHz) and the Efficiency cores get a 200MHz speed bump to 2GHz.

According to Qualcomm, the faster clock speed delivers a 10 percent gain in CPU performance. Qualcomm also boosted the Adreno GPU clock by 10 percent to give gaming and graphics a performance uplift as well.

It's not solely about faster performance with this release; Qualcomm is also touting significant power efficiency gains. 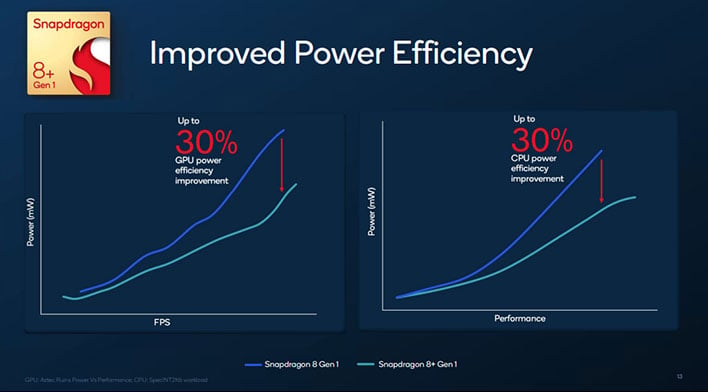 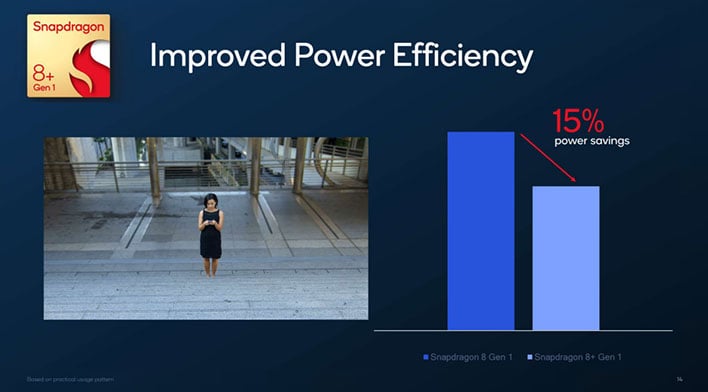 Qualcomm credits an "improved" Adreno GPU with not only delivering faster speeds, but also a 30 percent power reduction "to deliver the ultimate gameplay experience." The implication there is a boost in frame rates for smoother gaming, while holding a charge for a longer period of time. According to Qualcomm, users can expect up to 60 extra minutes of gaming. Not too shabby.

Same goes for the CPU, with Qualcomm also claiming a peak 30 percent improvement in power efficiency. Beyond the peaks, what this all purportedly translates to is a 15 percent power savings over the non-Plus variant.
What does this mean for actual usage? In addition to extending gameplay for an hour, Qualcomm says users can expect 80 more minutes of video streaming, 5.5 more hours of talk time and 25 minutes of 5G WeChat video calling, an additional 50 minutes of browsing social media sites and services, and 17 more hours of music playback. 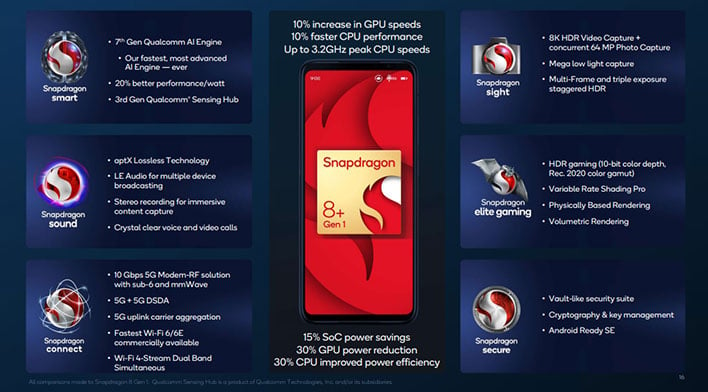 As you would expect, the speed increases and power efficiency gains don't come at the expense of the overall feature-set. As with the non-Plus variant, the Snapdragon 8+ Gen 1 features Qualcomm's 7th AI engine, it supports recording 8K videos in HDR, and is ready to rock out on 5G networks with support for both sub-6GHz and mmWave. 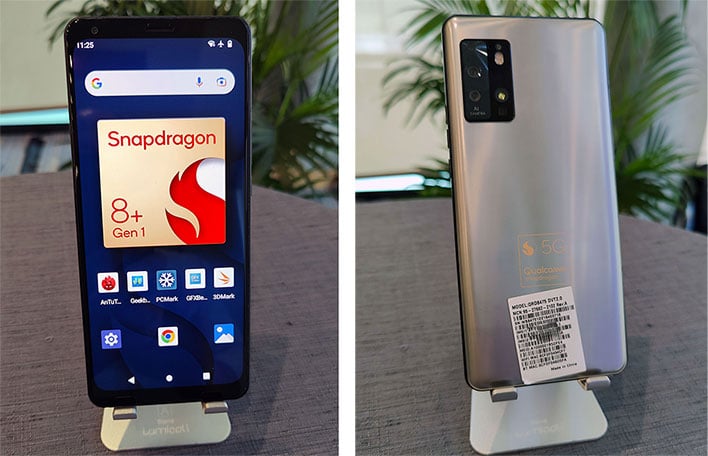 As we were able to do with the previous generation chipset, we managed to get our hands on a prototype reference handset outfitted with the Snapdragon 8+ Gen 1, and 8GB of LPDDR5 RAM. This gives us as close to an apples-to-apples comparison as possible between the Plus and non-Plus variants, without custom themes or other third-party bits that could potentially affect the results.

We also have an extensive collection of benchmark data from retail devices like the Galaxy S22+ and Pixel 6 Pro. In addition, we very recently examined MediaTek's Dimensity 9000, and have included those numbers in our benchmark charts as well. Let's get to it... 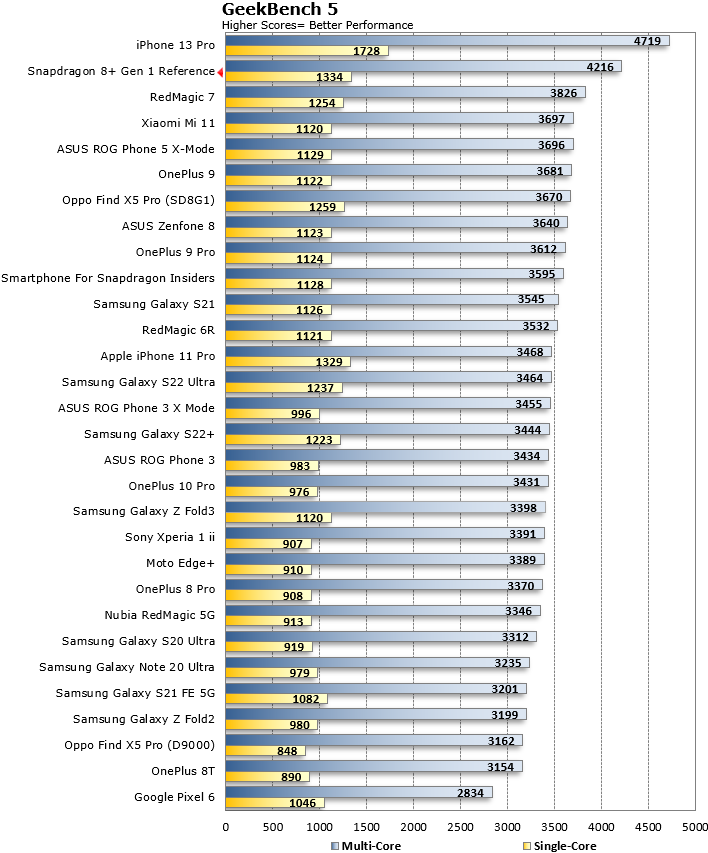 Our Snapdragon 8+ Gen 1 reference handset leapfrogged every other Android handset we've ever tested, and posted a 1,334 single-core score and 4,216 multi-core score. Only the iPhone 13 Pro with its A15 Bionic put up better numbers in this test.
Looking at the crop of Android handsets, the next closest multi-core score is 3,826, obtained from the RedMagic 7 with the Snapdragon 8 Gen 1. That's actually higher than the 3,740 score we obtained with last year's reference Snapdragon phone, but true to Qualcomm's claim, the Snapdragon 8+ Gen 1 scored around 10 percent higher (a little over, actually). 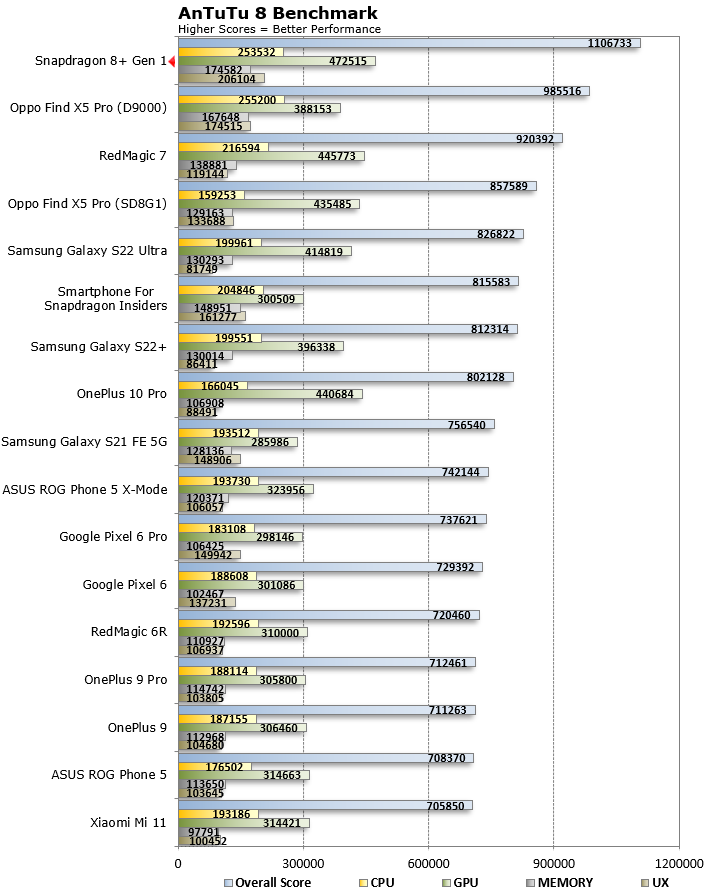 The gulf widened significantly when we ran the AnTuTu benchmark. Here we see a greater than 20 percent jump in the overall score compared to our best result obtained from a Snapdragon 8 Gen 1 handset. The Snapdragon 8+ Gen 1 also beat the Dimensity 9000 by 12.3 percent. 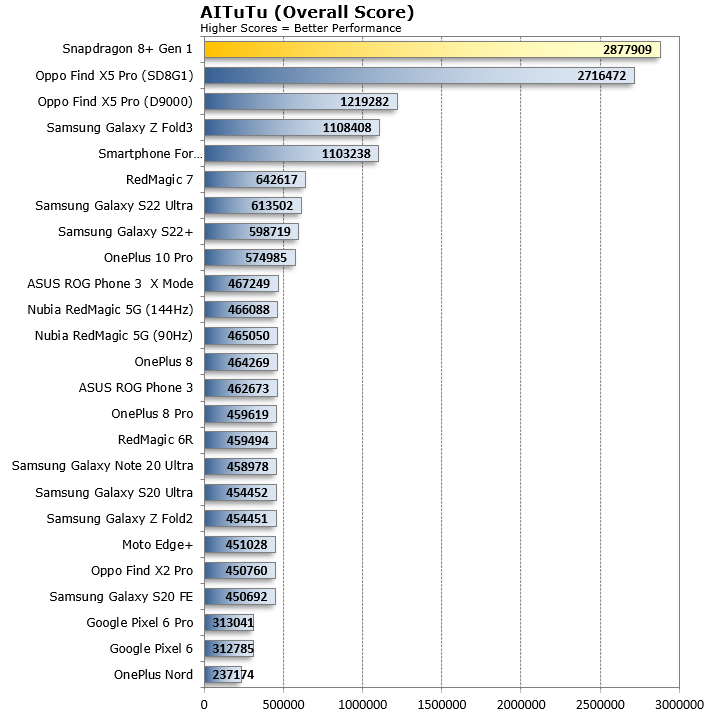 An interesting trend over the past few generations of smartphones is an increased focus on AI performance. While that term gets thrown around a little loosely these days, AI has emerged as an important aspect in modern mobile experiences. From real-time language translation and parsing voice commands, to cleaning up photos on-the-fly, AI performance matters to our day-to-day usage.

The Snapdragon 8 Gen 1 excels at AI workloads, and as we can see in the performance chart above, the Snapdragon 8+ Gen 1 kicks things up a notch. Qualcomm's 7th Gen AI Engine packs a punch, and while it remains unchanged from the non-Plus variant, our guess is the faster CPU clocks are helping out here. 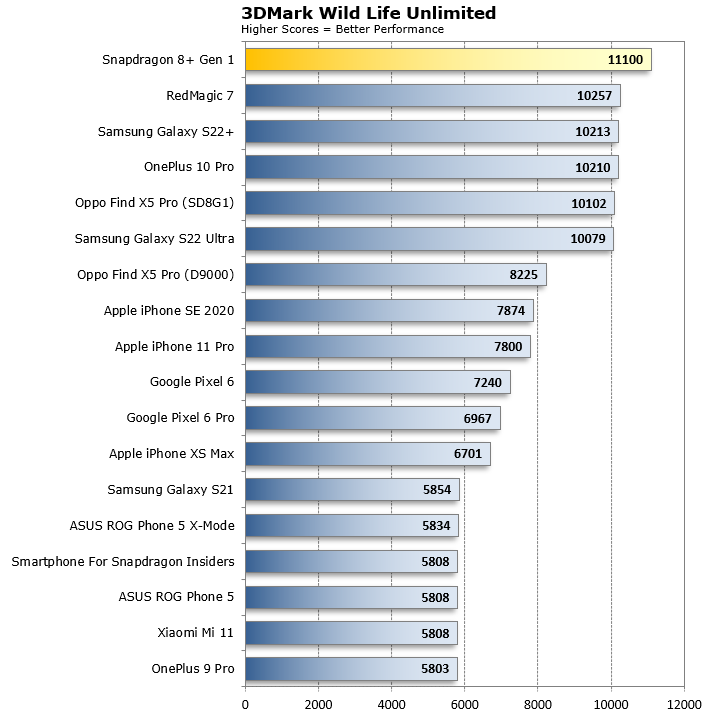 Turning our attention to gaming and graphics, the Snapdragon 8+ Gen 1 gets off to an impressive start by moving the upper performance needle in 3DMark Wild Life Unlimited. Up to this point, we saw scores topping out at around 10,200. Qualcomm's latest silicon, however, hit 11,000, besting the previous top result by 8.2 percent. 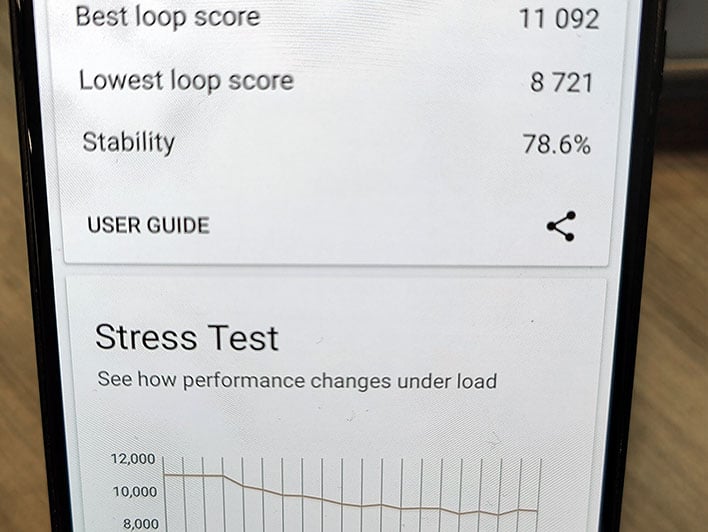 Before moving on, it's worth noting that the Snapdragon 8+ Gen 1 handled 3DMark's 20 minute Wild Life stress test like a champ. That's notable because it means the SoC isn't quick to throttle and potentially tank performance. The caveat is that the onus doesn't solely fall on the silicon, but also the handset and specifically its on-board thermal solution. Results will inevitably vary depending on the actual retail smartphone models, but what this tells us is that the Snapdragon 8+ Gen 1 is indeed power efficient and capable of maintaining high performance levels for extended periods of time. 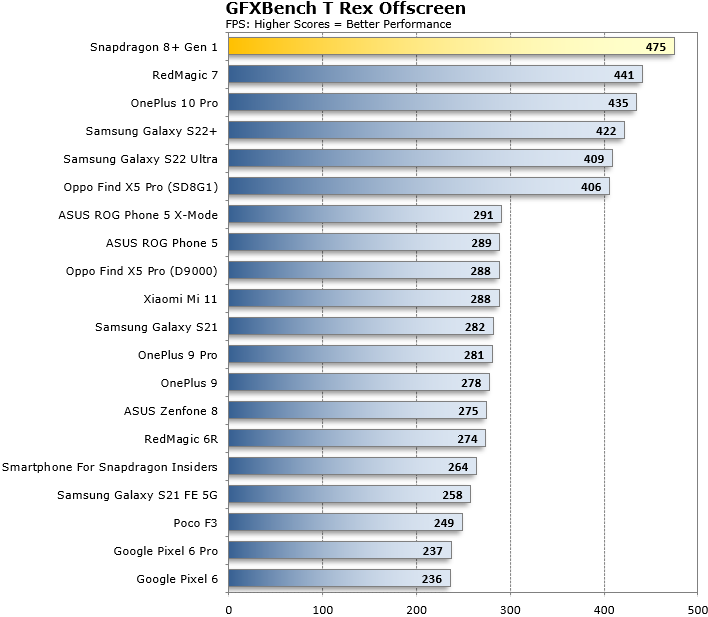 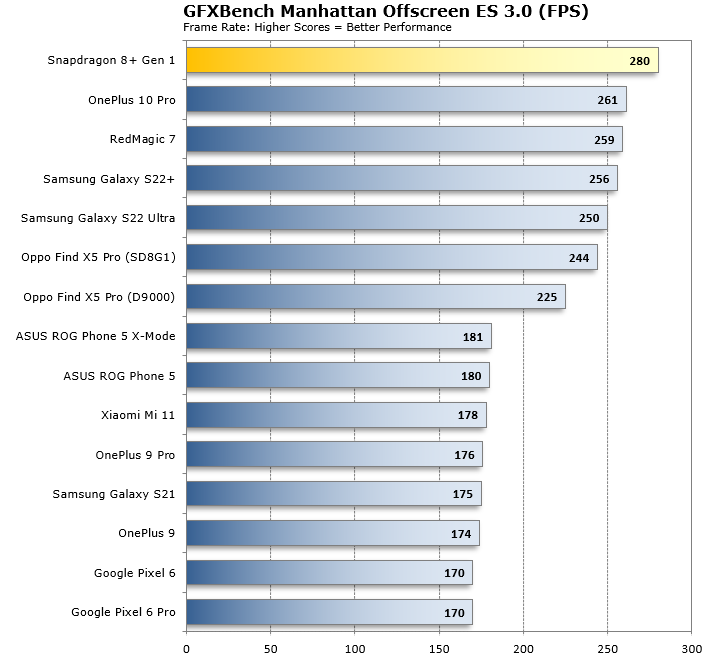 Closing things out, the Snapdragon 8+ Gen 1 again took the top spot in this Vulkan benchmark, resulting a clean sweep of our benchmarks. We don't have quite the robust set of results to compare against, but we still can observe a modest jump in performance over the previous generation flagship. 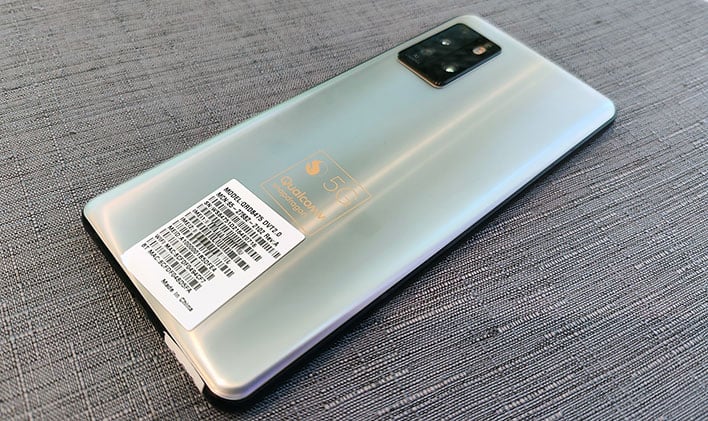 Given what we already knew about the Snapdragon 8 Gen 1, it's not a surprise that the Snapdragon 8+ Gen 1 performed so well across a variety of benchmarks. We just didn't know if the performance uplift would live up to Qualcomm's claims, and as far as our testing goes, it does for the most part.
What's perhaps even more impressive is that it handled the 3DMark stress test so well. Qualcomm is claiming big gains in power efficiency. This can not only improve battery life, but also result in a smartphone performing close to its peak for a longer period of time. That's obviously dependent on cooling too, but our reference prototype proves that it won't be the Snapdragon 8+ Gen 1 that things back.
We're looking forward to see how future flagship Android phones leverage Qualcomm's newest silicon. To that end, Qualcomm says we can to see devices from the leading OEMs and brands, including ASUS ROG, Black Shark, Honor, iQOO, Lenovo, Motorola, Nubia, OnePlus, Oppo, OSOM, RealMe, Redmagic, Redmi, Vivo, Xiaomi, and ZTE.
All the heavy hitters, in other words, with hints that gaming phones with the Snapdragon 8+ Gen 1 are on the horizon. In terms of timing, Qualcomm says we'll see commercial devices begin to arrive in the third quarter of this year, so perhaps as early as July.