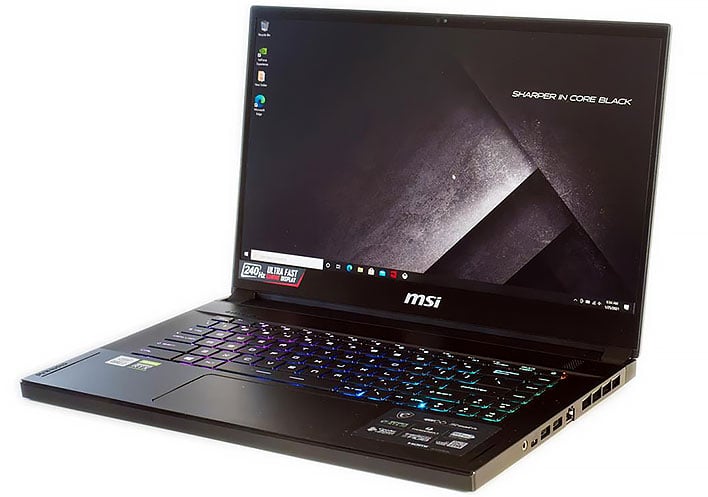 NVIDIA unveiled its Ampere-based RTX 30 series mobile GPUs at a special GeForce Event during this year's virtual CES 2021 festivities. A wide range of notebook design wins were also showed off at various events, spanning a variety of form factors. With the GeForce RTX 30 series, NVIDIA is targeting high-performance gaming notebooks in form factors as thin 16mm, even with the flagship GeForce RTX 3080.

Thinner, higher-performance form factors aren’t the only features NVIDIA is touting. A number of upcoming notebooks will also be sporting 1440p, ultra-high refresh rate IPS displays. In fact, the test vehicle we were lucky enough to evaluate for this article – an MSI GS66 Stealth with a GeForce RTX 3080 mobile GPU on board – features a gorgeous, 15.6” anti-glare, IPS panel with a native 2560x1440 resolution and 240Hz refresh rate, with G-Sync support. This particular machine/configuration may or may not be offered for sale exactly as pictured here, but it was too interesting a prospect not to check out.

If you want to see what a retail-ready notebook with a GeForce RTX 30-series GPU can do, we’ve got some the goods from Alienware on tap for you as well (and you really should check it out).

Before we talk about our experience with this MSI machine and the GeForce RTX 3080 laptop GPU’s performance, however, we’ve got some technical stuff to get out of the way, first... 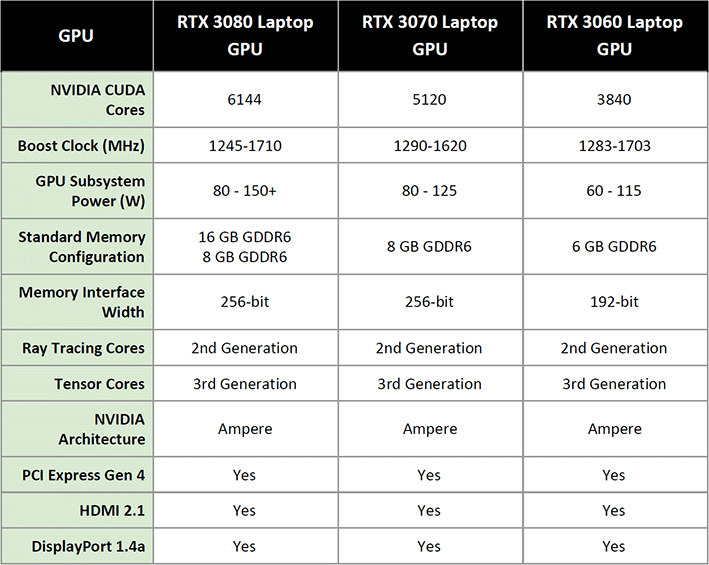 The initial lineup of GeForce RTX 30-series laptop GPUs consists of the GeForce RTX 3060, 3070, and 3080. Though they carry the same monikers as their desktop counterparts, these laptop GPUs are different in a number of ways.

The entire lineup’s reference specifications are listed in the table above. The biggest difference between these various mobile GeForce RTX 30 series GPUs and their desktop counterparts, are their core counts. Desktop GeForce RTX 3080, 3070, and 3060 series GPUs have 8,704, 5,888, and 3,584 CUDA cores, respectively, whereas these laptop offerings have 6,144, 5,120, and 3,840 – it is only the RTX 3060 laptop GPU that has more cores than its similar-branded desktop counterpart.

The boost clocks of the GPUs also differ between the laptop and desktop RTX 30 series, but they’re in the same ballpark. The memory configurations are quite different, though. The mobile RTX 3070 is right in-line with its desktop counterpart, with 8GB of GDDR6 attached over a 256-bit interface. The mobile RTX 3080 has a narrower memory interface (by 64-bits), but includes either 8GB (less) or 16GB (more) of memory. That memory is of the GDDR6 variety and not GDDR6X, though. The RTX 3060 laptop GPU packs less memory (6GB) than the upcoming desktop GeForce RTX 3060 as well.

Versus the previous, Turing-based GeForce RTX 20-series mobile GPUs, the new 30-series offers higher CUDA core counts and faster memory. The RT and Tensor cores are also newer and more capable. Since we’ve already covered the Ampere architecture in-depth, however, we won’t do so again here. If you’d like a deeper-dive on Ampere, we suggest checking out some of our previous coverage. We should also point out that NVIDIA has been at work on their software as much as their hardware. In addition to all of the benefits that come by way of Ampere, the GeForce RTX 30 series GPUs also offer support for other NVIDIA technologies, like Reflex, Broadcast, and NVIDIA’s Studio drivers. And there’s some new stuff coming as well...

NVIDIA is introducing a couple of new or updated features with its 3rd Gen Max Q technologies, namely Dynamic Boost 2.0 and Whisper Mode 2.0. And the platform has also been graced with Advanced Optimus and support for Resizable BAR. 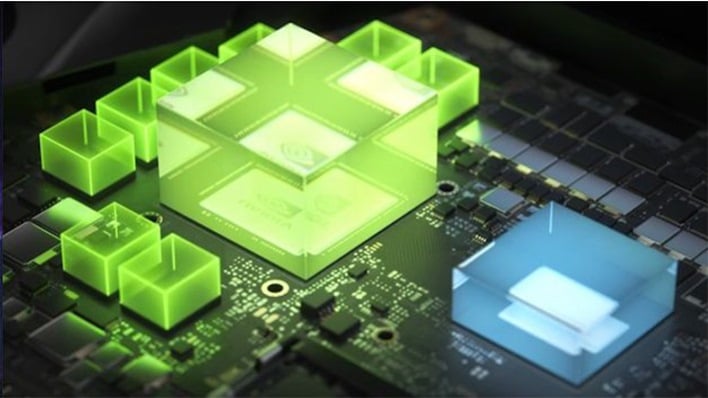 Dynamic Boost 2, like the original, dynamically shifts power between the CPU, GPU, and graphics memory sending it where it’s needed most depending on the workload. New AI algorithms have apparently been leveraged with Dynamic Boost 2.0, however, that enhance its accuracy. Optimizing power delivery on mobile platforms, which often share cooling solutions a across the CPU and GPU, is a key component to maximizing performance. If there is thermal budget available for one (or more) of the components, Dynamic Boost 2.0 can crank up the voltage and clocks to eke out some additional performance.

Advanced Optimus introduces some big changes as well. As a quick refresher, NVIDIA’s Optimus technology automatically switches between integrated and discrete GPUs, depending on the workload, in an effort to optimize power – there's no need to fire up a powerful discrete GPU in situations where an integrated GPU will work just fine. A historic problem with this relationship is that the discrete GPU was not directly connected to the display. Instead, the GPU rendered a frame and wrote it to the iGPU’s framebuffer, where it was then output to the display. This configuration meant advanced features like G-Sync or the ability to drive high-resolution / high-refresh rate displays wasn’t an option. This is no longer the case with Advanced Optimus.

Advanced Optimus uses a dynamic hardware switch inside the laptop to toggle between the GPU connected to the laptop’s display. NVIDIA’s drivers and software automatically detects which GPU would work best for a particular application and connects either the NVIDIA GPU for heavier workloads or the iGPU for lighter workloads. 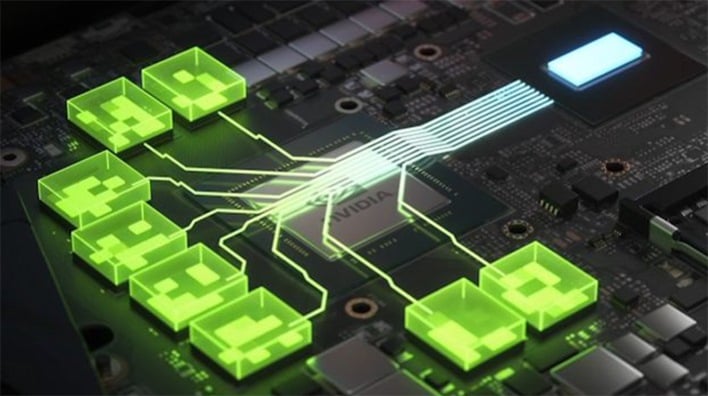 NVIDIA’s GeForce RTX 30 series laptop GPUs also support Resizable BAR. Resizable BAR (Base Address Registers) is a feature of PCI Express that enables the CPU to access the entire GPU framebuffer at once. Without Resizable BAR CPUs can only access up to 256MB at a time. Because the CPU and GPU are constantly swapping data, handling access in one large request, versus multiple smaller ones, can reduce overhead and increase performance in certain games. 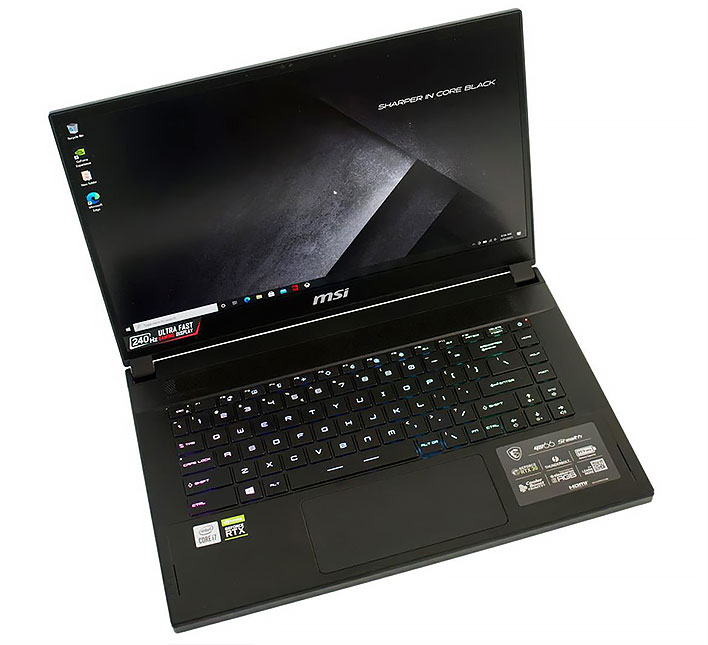 To test the GeForce RTX 3080 laptop GPU, NVIDIA set us up with a prototype MSI GS66 Stealth laptop. We're not going to dwell much on the system itself, because this particular configuration may not be offered for sale, but we had to show you this sleek, beast nonetheless.

The MSI GS66 Stealth you see here is a thin, 18mm, sub-5lb gaming notebook, featuring an Intel 10th Gen Core i7-10870H, 16GB of RAM, a 1TB SSD, and a gorgeous 15.6" anti-glare IPS 1440p display, with a 240Hz refresh rate and G-Sync support. The GeForce RTX 3080 inside the machine is paired to 16GB of GDDR6 memory as well, and there's a capacious 99.99Wh battery powering it all. Until Intel's 11th Gen Core-H or AMD's Ryzen 5000H series processors hit the scene, this is about as powerful of a gaming notebook there is, despite its relatively thin design.

We'll talk more a little later about acoustics, thermals, and battery life. In terms of our overall experience with this machine though, it is overwhelmingly positive. Cramming so much horsepower into a machine with this form factor is impressive in our opinion. As you'll see, performance is top-notch. This particular 1440p, 240Hz display though, is sublime. It is punchy, with excellent viewing angles. And the super-high refresh rate (in conjunction with the RTX 3090) translates into smooth, tear-free gameplay, with excellent visual fidelity. We certainly hope this display makes it into an assortment of notebooks this year -- it is excellent.

But we digress. We're sure you're itching to see how the GeForce RTX 3080 laptop GPU performs, so let's get to it...

Unfortunately, we didn't have an array of high-end gaming notebooks on hand to run fresh numbers for comparison purposes. As such, we'll be comparing the MSI GS66 Stealth with RTX 3080 to an assortment of gaming notebooks we have previously evaluated. That means running most of these tests at 1080p, but it will give you a frame of reference at least. On the next page, we run a bunch of 1440p numbers as well, but compare the RTX 3080 laptop GPU to desktop graphics cards. Please note that we used the GS66 Stealth's "Balanced" thermal profile here, with the Windows power plan set to "Highest Performance". Configuring the machine with its "Extreme Performance" profile (available within MSI's Dragon Center utility) had minimal to no impact on our benchmark scores.

First up, let's start with some 3DMark action. UL’s well-known 3DMark benchmark suite features tests that target different types of computing devices. We selected the Time Spy, Fire Strike Extreme, and Port Royal tests for a glimpse at the GeForce RTX 3080 laptop GPU's potential gaming performance in DirectX 12 and DirectX 11 scenarios. We also have a fair amount of comparison data for these tests. 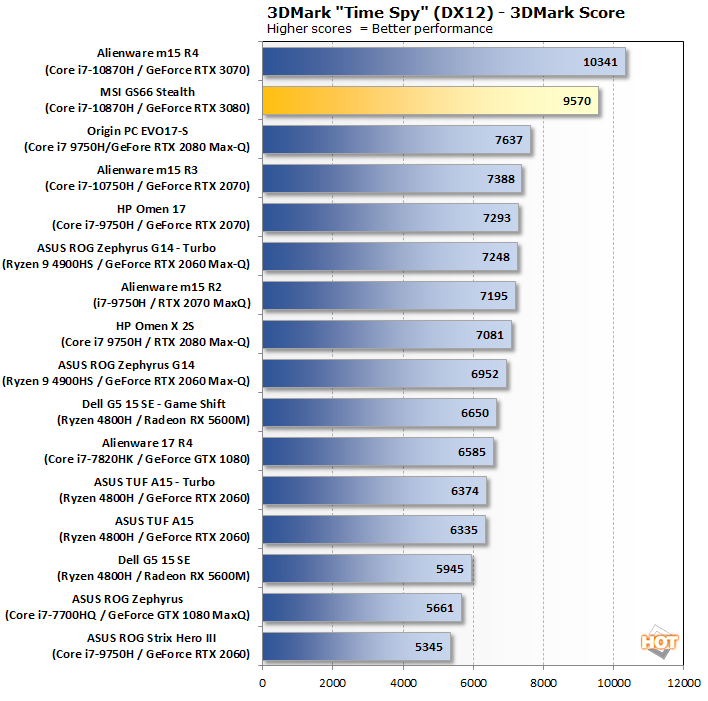 Interestingly, the GS66 Stealth with GeForce RTX 3080 combo ends up trailing the retail-ready Alienware m15 r4 with GeForce RTX 3070 (the full review of that Alienware machine just went live as well). We are still digging in, but we believe this result is due to a few factors. First, the Alienware system is 3mm thicker, which translates to a significant amount of additional surface area for its internal cooling solution. That, in conjunction with the RTX 3070's higher base frequency, and likely higher average clocks, may be pushing the 3070 higher here. Versus the Turing-based RTX 20-equipped notebooks though, the RTX 3080 and 3070 are simply in another league. 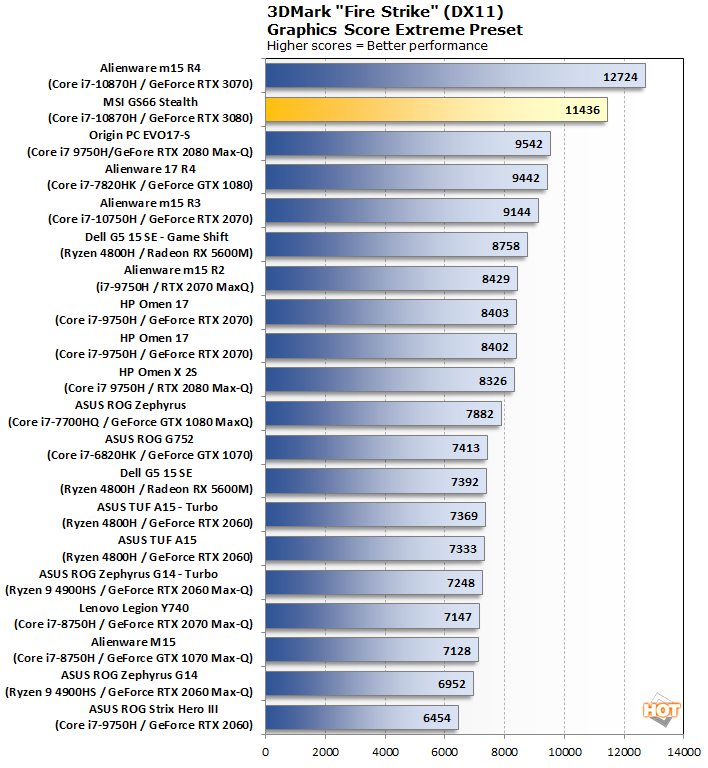 We saw a similar trend in the Fire Strike Extreme test. Once again the RTX 3070 pulls off a victory over the RTX 3080, but the Ampere-based duo crushed all of the other machines we've tested.

Port Royale is next, which is a DirectX Ray Tracing (DXR) benchmark. Because this test requires hardware ray tracing acceleration, the Radeons are out, and this list is NVIDIA-only, that is until AMD's RDNA2-based mobile GPUs arrive. 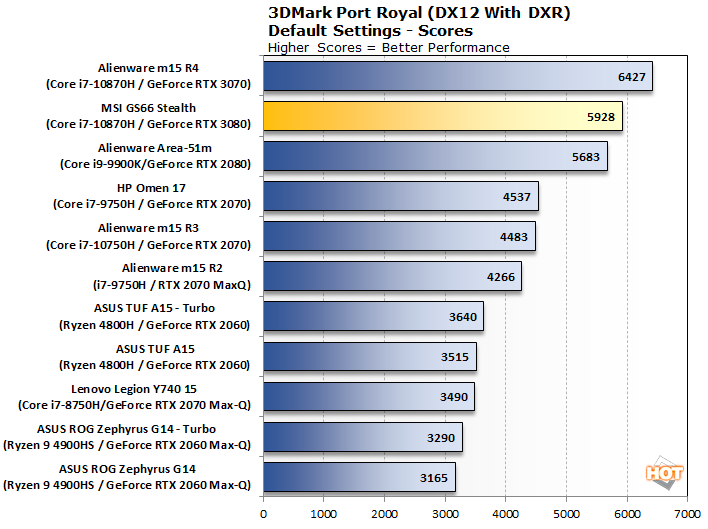 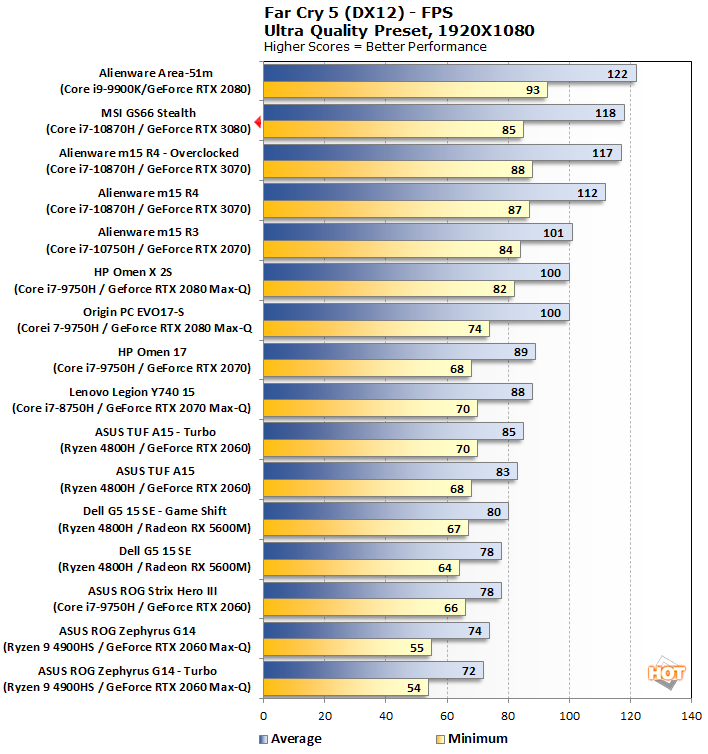 Switching gears from synthetic 3D testing to actual game benchmarks, the GeForce RTX 3080 laptop GPU ends up pulling ahead of the RTX 3070 and trails only the massive Alienware Area-51m, with its full desktop CPU and GPU. None of the machines with mobile components come close. 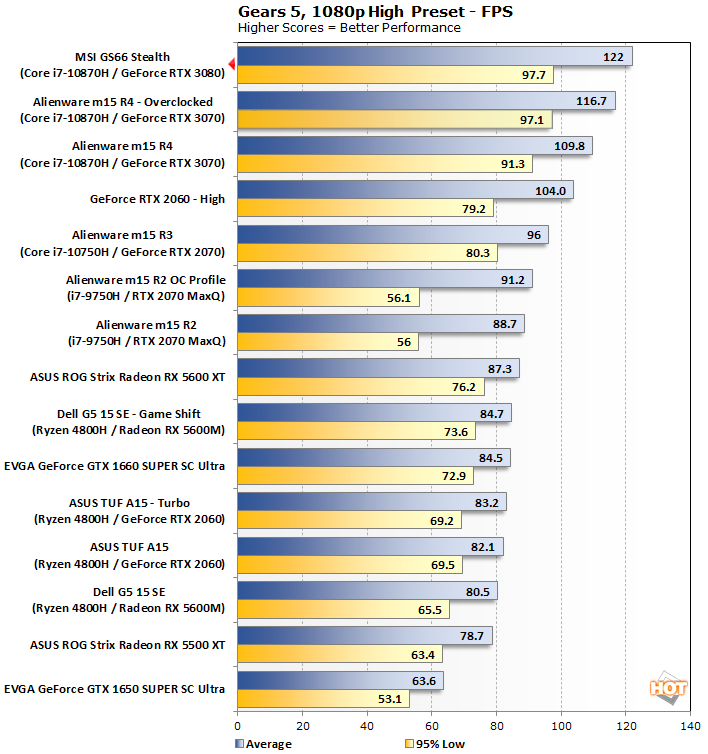 The MSI GS66 Stealth and GeForce RTX 3080 laptop GPU combo tops the charts here, besting every other machine we tested. Even the desktop-class RTX 2060 falls victim to the mobile RTX 3080 by over 10%. 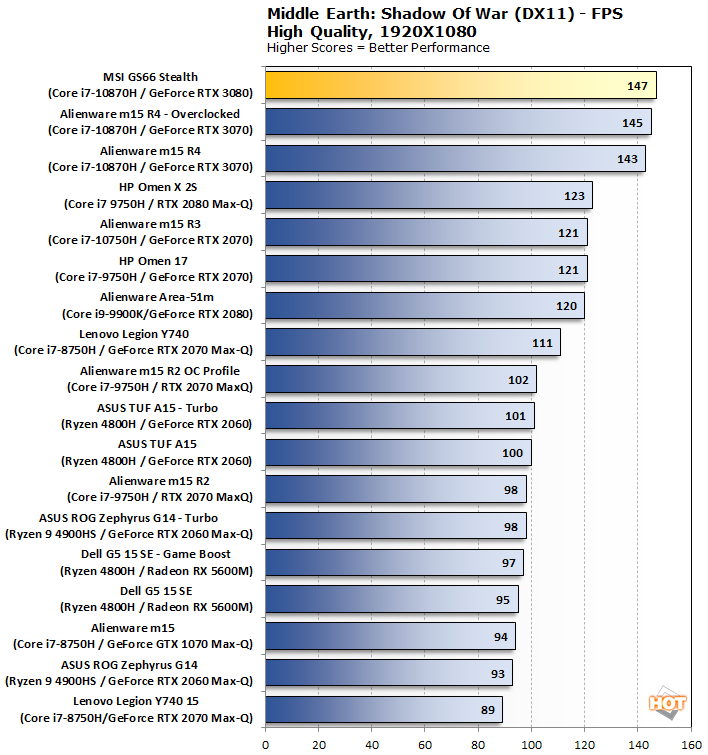 The GeForce RTX 3080 laptop GPU takes the pole position yet again. In this game, NVIDIA's latest flagship mobile GPU significantly outpaces any of the Turing-based offerings in the RTX 20 series. 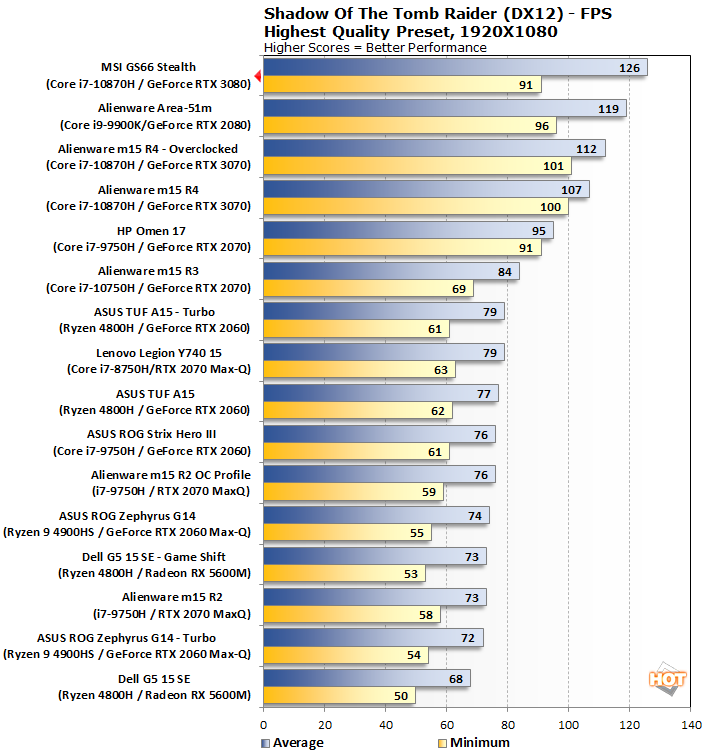 The GeForce RTX 3080 scored another clear victory in the Tomb Raider benchmark, besting every other notebook we've tested, including the Alienware Area-51m with its desktop-class components.
NEXT PAGE