This next group of benchmark results feature the MSI GS66 Stealth and GeForce RTX 3080 laptop GPU running at the machine's native display resolution of 2560x1440 (except for a couple of the synthetic tests), but all of the comparison data is from desktop GPUs, backed by a Ryzen 9 5950X. These comparisons are far from what we'd consider "fair", but they serve two purposes. First, they give us a frame of reference -- having single-bars in the charts for the GS66 Stealth wouldn't be particularly useful. But they also show where the GeForce RTX 3080 laptop GPU falls relative to its desktop-class namesake.

With the Pascal-based GeForce GTX 10-series, the performance disparity between mobile and desktop GPUs was relatively small. That disparity got somewhat larger with the mobile RTX 20 series. And now we get to see where things land with the RTX 30 series... 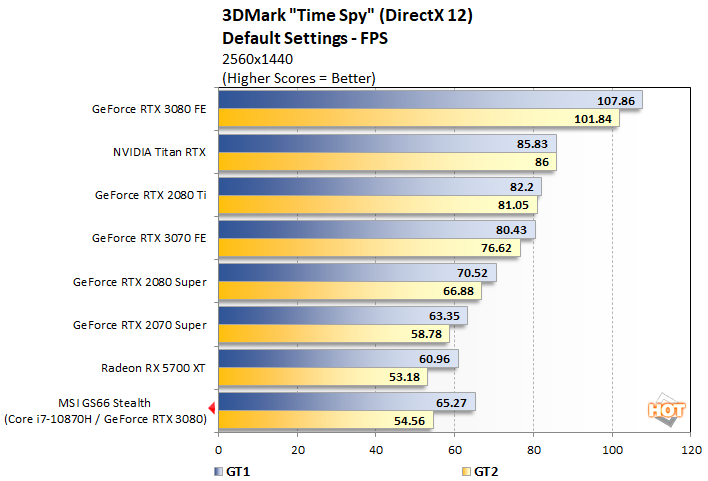 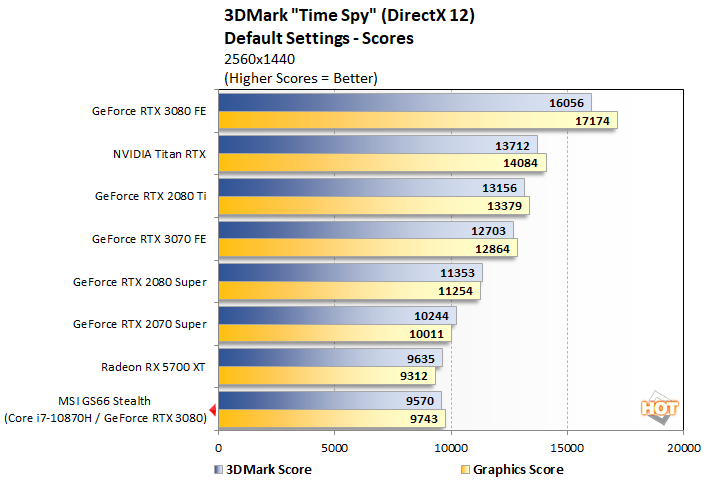 In the DX12-based 3DMark Time Spy benchmark, the GeForce RTX 3080 laptop GPU technically trails the pack in terms of its overall score. But, if you look at the individual results in the top chart, you'll see the the RTX 3080 actually beats the full-desktop Radeon RX 5700 XT in terms of framerate and outpaces the GeForce RTX 2070 Super in Game Test 1 as well. It was the Core i7-10870H's CPU Physics score that pulled down the overall result, relative to the desktop test system's Ryzen 9 5950X. 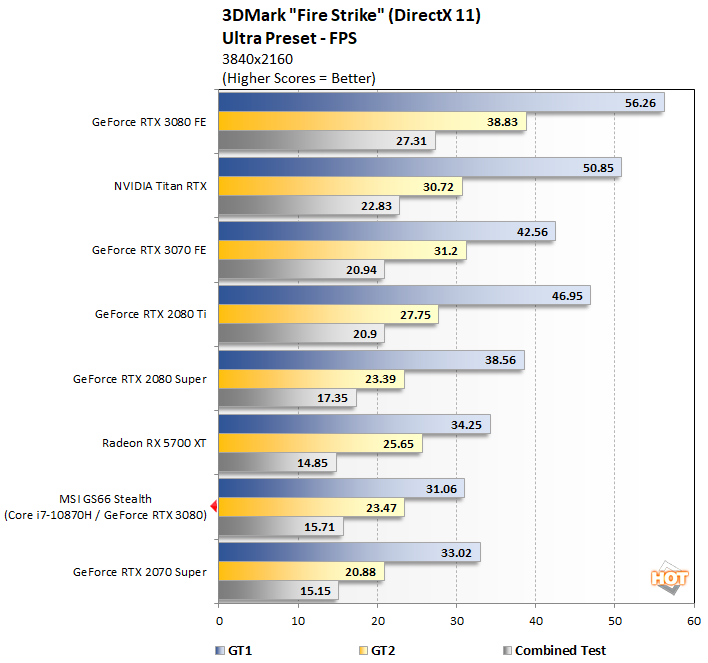 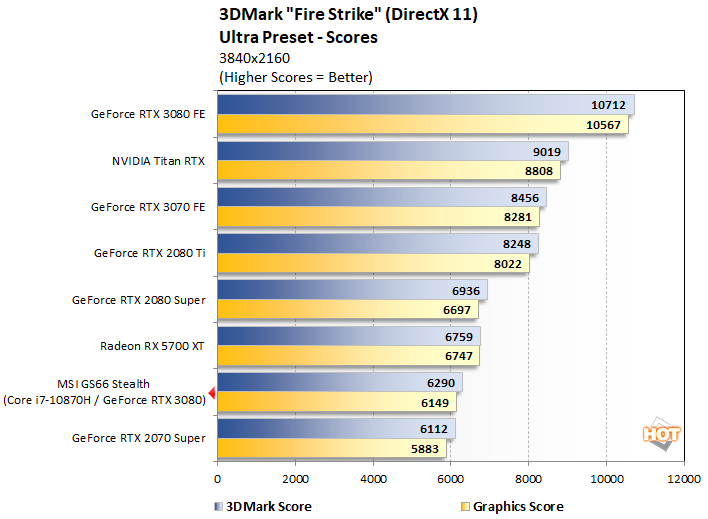 We also experimented with the newer, more demanding DirectX Ray Tracing Feature test, which was recently released as an update to 3DMark... 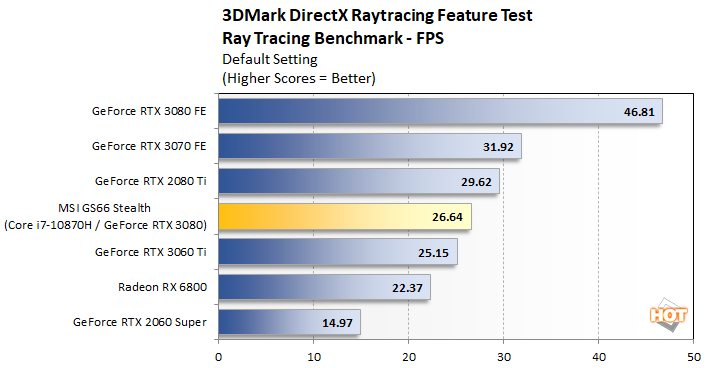 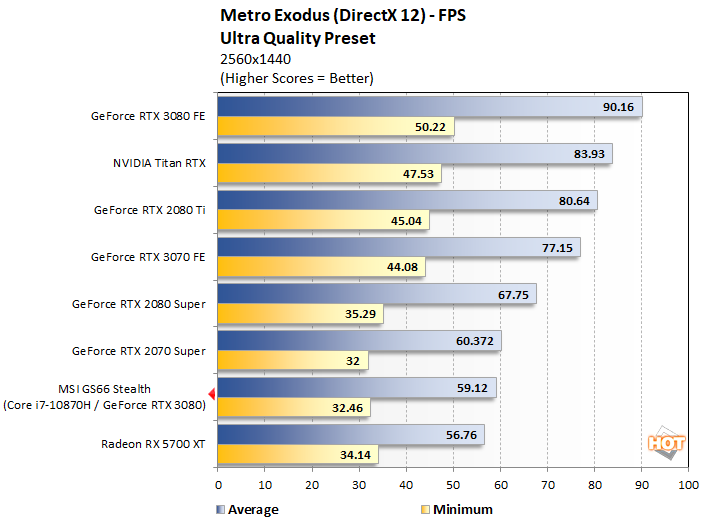 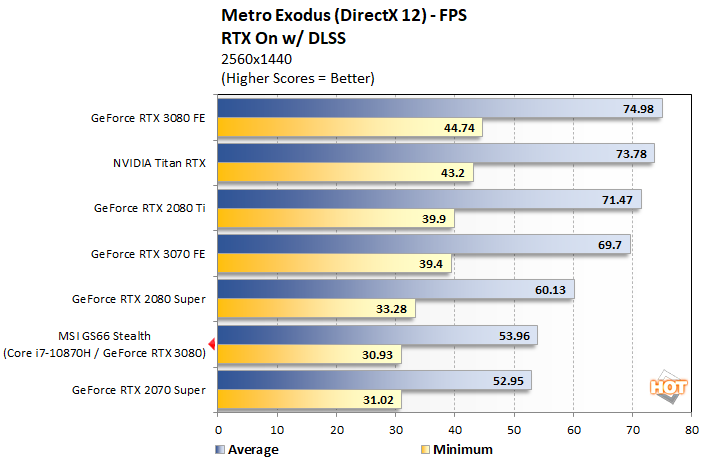 When using the RTX preset (which enables DXR ray tracing effects and DLSS) in this game, the GeForce RTX 3080 laptop GPU is able to overtake the GeForce RTX 2070 Super, but it can't quite catch the more powerful RTX 2080 Super. 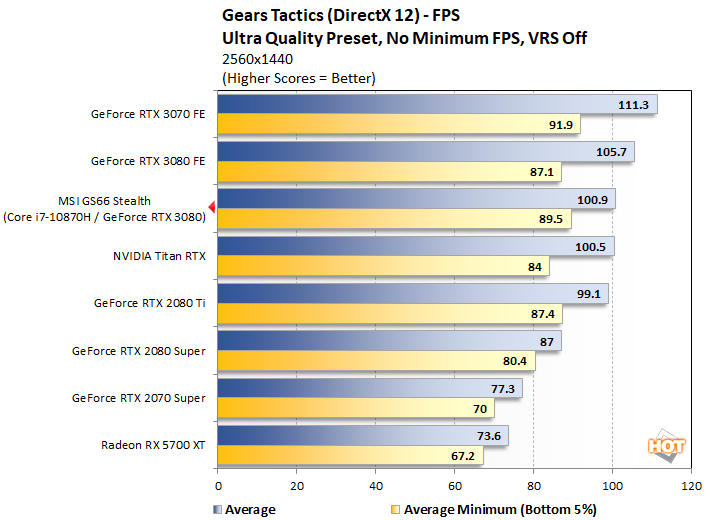 Gears tactics is somewhat GPU bound at 1440p, so there's not much separating the highest-end cards. The performance characteristics of this game, however, result in a particularly strong showing the GeForce RTX 3080 laptop GPU, which ended up outperforming a Titan RTX and finishing only a couple of percentage points behind the GeForce RTX 3080 FE. 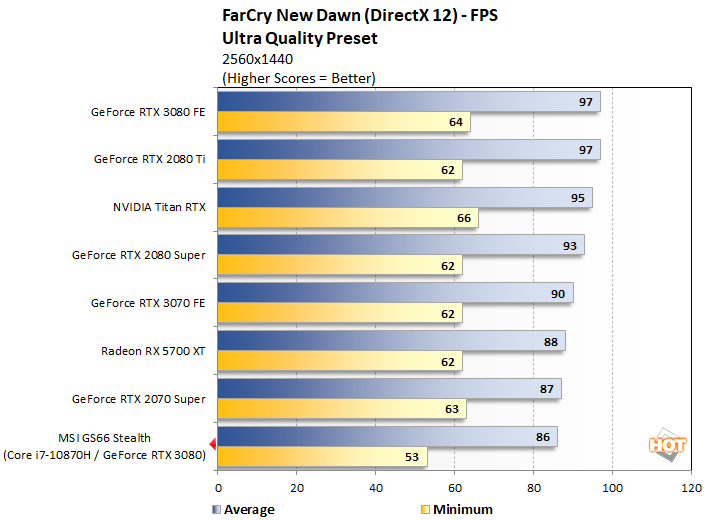 FarCry New Dawn is also somewhat GPU bound at 1440p, so there's not a massive spread between the fastest and slowest configurations here. The GeForce RTX 3080 laptop GPU ends up trailing the pack, but puts up a smooth 86fps, which is right on the heals on cards like the RTX 3070 Founders Edition and Radeon RX 5700 XT.