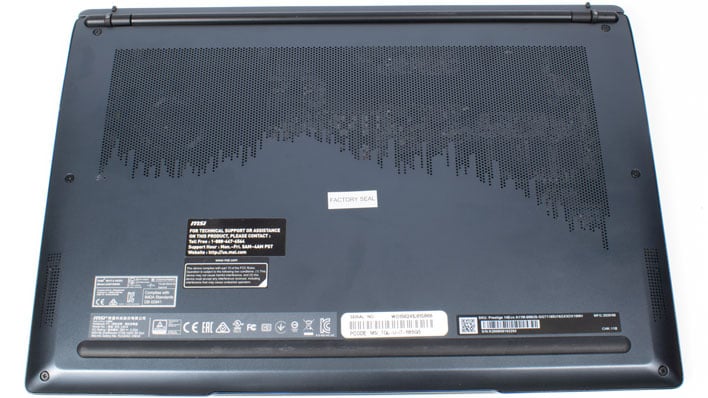 The bottom of the Prestige 14 EVO has an enormous mesh vent, which should allow air to move quite freely into the system, especially considering how the hinge props the system up off the table, providing the chassis with a five-degree lift angle that lets plenty of air in. This mesh design takes a cue from many of the top selling desktop cases of 2020, which trade absolute silence for better air flow, which in-turn allows the fans to spin more slowly for better acoustics.

Gaining entry to this MSI notebook is as simple as removing seven Philips head screws. There's a "factory seal" sticker sitting over the one in the center. We're not a big fan of this sort of tamper prevention system, and many states have passed right to repair laws negating the need to warn users. We haven't seen a sticker like this in quite a while, but it didn't stop us from opening our review unit. Once we got the screws out, a little help from a guitar pick helped pop all of the tiny tabs free from their retention slots and the bottom cover came right off. 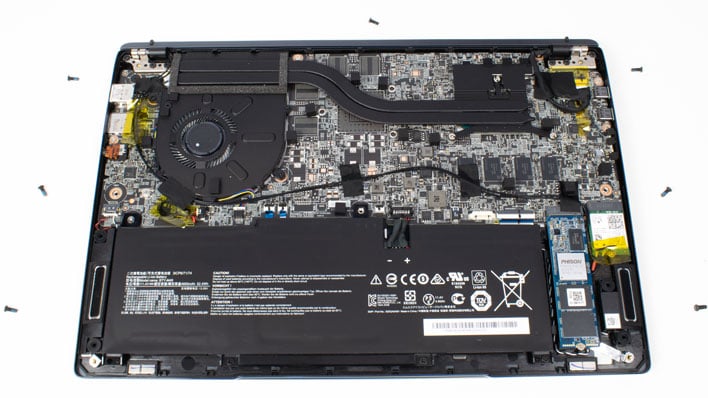 Once we get into the Prestige 14 EVO, we can see that the thermal system is fairly straightforward. If we flip back to the heat pipe and blower combination found on other Tiger Lake systems like the Dell XPS 13 9310, that system had dual fans, a more elaborate heat-pipe setup, and additional thermal barriers. However, the Prestige 14 EVO's fan is quite a bit bigger than the smaller dual fans in the Dell system. This straightforward, single-fan thermal design solution might explain why MSI's faster fan profile didn't result in much extra performance. The motherboard is quite large, as well, and the system's 14" chassis gets put to good use.

Below the motherboard, we see the system's 52 Wh battery, which is about the same as many other ultraportable notebooks we've tested. It's secured by a handful of screws, making it theoretically possible to replace should it give out. To the battery's right sits the discrete Phison SSD in a standard M.2 slot. It's a relief that MSI makes this user replaceable, since the whole system isn't a brick if its flash storage gets maxed-out or worn out over time. On each edge sits the pair of 2 W speakers, which are long, narrow drivers that lack some bass, but do well with good volume for midrange and high-end output.

If the performance numbers on the previous page and the photos above don't totally give it away, we'll just come out and say it: from a thermal standpoint, the MSI Prestige 14 EVO is in a challenging spot. Out of the box, its fan gets pretty loud compared to 15 W designs, a necessary evil considering the excellent performance of this system's Core i7-1185G7. Fortunately, MSI's Center for Business and Productivity provides a Silent fan profile that will keep the fan much quieter at the cost of performance, if you so choose. 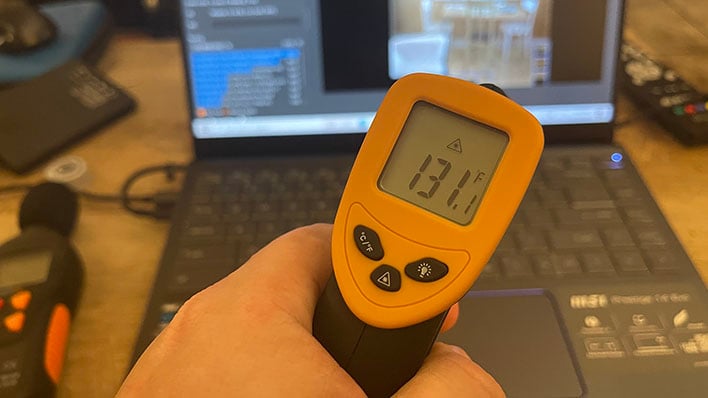 To see how loud and how hot the system gets at default, we turned to Cinebench R23's 10-minute throttle test. At the seven to eight minute mark, we started recording temperatures and fan noise. The hottest point we could find was at the vent, which pushes air up between the chassis and the display. Internally, HWiNFO recorded CPU temperatures of 95 degrees Celsius, which is around 200 degrees Fahrenheit at the CPU package, which is toasty but well below the Core i7-1185G7's max 100 C operating temperature. The air coming out of the system warmed the bottom display bezel to higher than 131 degrees F, which is just shy of 55 C. And throughout all of this, the system only bled off about 6% from its peak Cinebench score, which means thermal throttling isn't a major issue with the Prestige 14 EVO.

That's pretty warm, but fortunately it's not in a place where you hands would normally touch. The keyboard never got uncomfortable, and we think this temperature isn't higher just because of the extra airflow provided by the tilt of its display. Regardless, we'd never want this thing on our legs during periods of long, sustained used, when CPU temperatures reach their maximum. During regular, day to day use though, it shouldn't pose a problem. Once the Prestige 14 EVO had time to cool down, for example, the CPU got back down to around 45 C (113 F) and the surface temperatures went even lower. 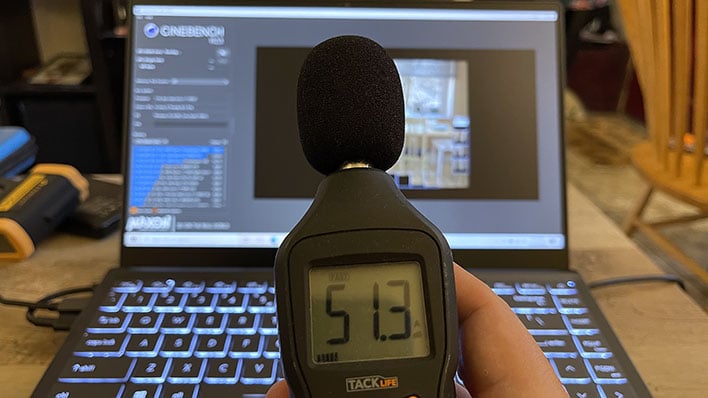 The Prestige 14 EVO is louder than most of 15 Watt TDP notebook designs we've tested as well. The sound emitted by the cooling fan is not a high-pitched whine, though. It's just a rush of air pushing out of the vent, up and away from the display. At its loudest, we measured between 51 and 52 decibels at a distance of 24 inches from the vent. That's louder than the others, as we said but, since its fan noise pitch character isn't annoying, we weren't bothered by it.

When idle, the Prestige 14 EVO is still louder than most ultraportables because the fan never spins down when using the default profile. We still measured 36 to 38 dBA with our sound meter, which is just a bit higher than the 30 dBA noise floor of our room. That's just barely a whisper, though the fan never totally spins down. Users who want absolute silence can choose the Silent fan profile, which trims back the maximum clock speeds and allows the fans to spin down to inaudible levels. 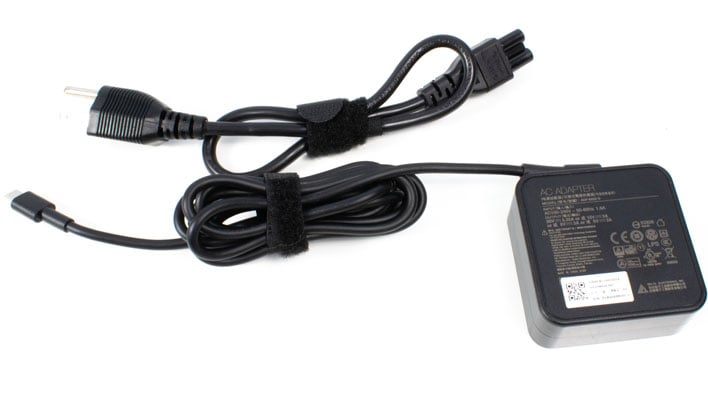 MSI built a sturdy, fast, and lightweight notebook with the Prestige 14 EVO. The all-aluminum frame and chassis look great and contribute to a system that's never a burden to carry in a backpack or under the arm. This machine's thin profile also doesn't spoil the typing experience, as we liked the backlit keyboard an awful lot, too. Expandability is no problem thanks to a pair of Thunderbolt 4 ports, and having to deal with the dongle life is never an issue, thanks to the USB Type-A port and micro SD card reader as well.

From a performance standpoint, the Prestige 14 EVO might just be the fastest ultraportable notebook we've ever tested. All of our CPU-focused tests were met with notably better performance on this system than any other notebook in its size class we've tested to date -- especially in the single-threaded tests. In our JavaScript benchmark, Geekbench, and Cinebench, the Prestige 14 EVO was not to be beaten. The same held true for 3D and gaming tests, too. Pound-for-pound, this is one of the fastest notebooks around currently, and definitely the fastest we've tested. None of that cost the system much battery life either, as it still lasted seven hours away from the charger in our continuous video playback tests. 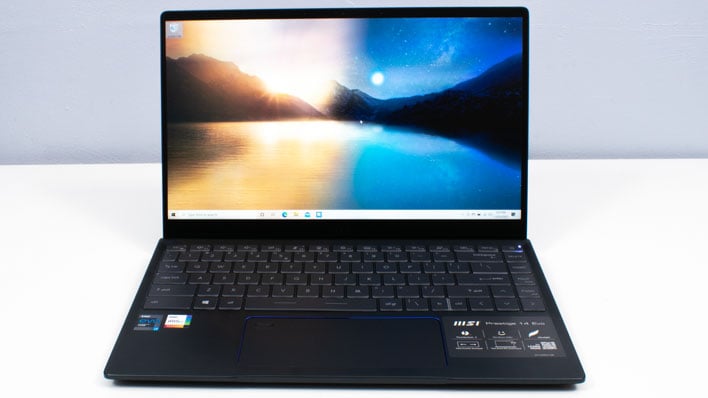 Pricing is another area where the Prestige 14 EVO shines. This system with a top-end Core i7-1185G7, 16 GB of LPDDR4X memory, and a 512 GB PCIe 4.0 SSD is just $1,149. That also gets you a vibrant 14-inch 1080p display, fingerprint and SD card readers, and Thunderbolt 4 expansion. Meanwhile, the Tiger Lake edition of the Dell XPS 13 with its swank 16:10 touch display and slightly slower Core i7-1165G7 is more than $1,400 from Dell right now. Folks who don't mind the slightly larger footprint and want more performance than the compact Dell machine can offer would do well with the MSI Prestige 14 EVO, though the MSI machine doesn't have quite the same fit and finish as something like the XPS 13.

If there's any nit to pick with this MSI laptop it's thermal performance. We can't help but wonder if some extra speed is locked away behind a thermal system that struggles to keep its 28 W CPU under target temperatures. Thankfully, this is forgivable because of its premium, light-weight design and reasonably well-behaved acoustics. Users who want the best top-end performance in this weight class for a very attractive price point would be well-served to look into the Intel Tiger Lake-powered MSI Prestige 14 EVO.