We also spent a little time overclocking the new MSI GeForce RTX 3080 SUPRIM X to see what kind of additional performance it had left under the hood. Before we get to our results, though, we'd like to provide some additional color as it relates to overclocking Ampere-based GeForce cards...

Ampere-based GeForce RTX 30-series cards like the MSI GeForce RTX 3080 SUPRIM X feature GPU Boost just like previous-gen GeForces. GPU Boost scales frequencies and voltages up and down based on the GPU's workload and environmental conditions at the time, within predetermined power and thermal limits. Should a temperature or power limit be reached, GPU Boost will drop down to the previous boost frequency/voltage stepping, in an attempt to bring power and temperatures down gradually, without causing any significant performance swings, and remain within that card's particular thermal and power envelopes. 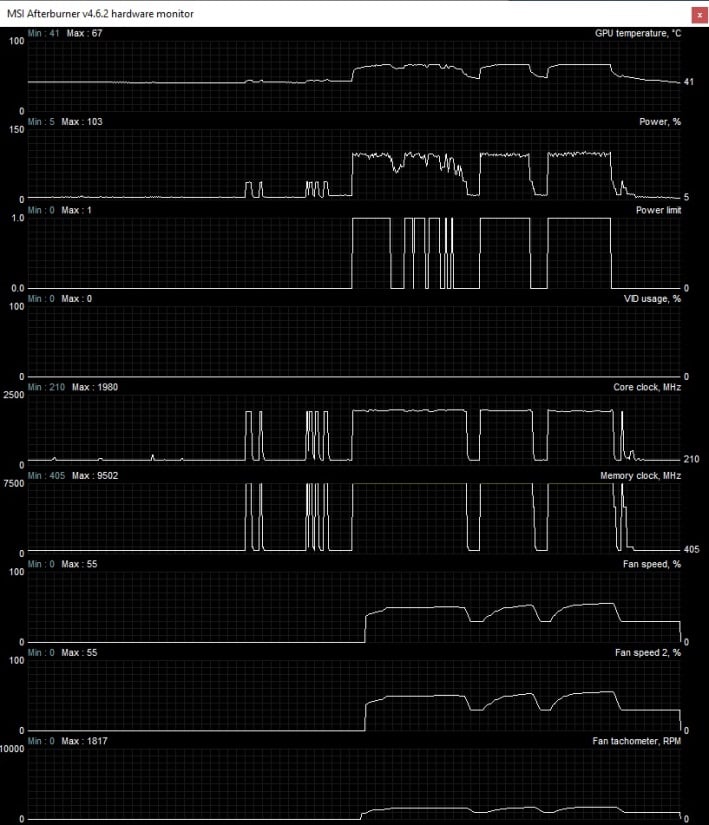 
As we've mentioned in some of our previous coverage, NVIDIA has segmented the core and memory power rails with its latest GPUs. It has also significantly tweaked and tuned interfaces on RTX 30-series to optimize signal integrity and power delivery to the GPU and GDDR6 memory, which should help with overclocking when there is power headroom available. With that said, like previous-gen Turing-based cards, the GeForce RTX 30-series is still power limited to prevent damage and ensure longevity, and that power limit is typically what'll determine a card's overclocking capabilities. Even cards like the MSI GeForce RTX 3080 SUPRIM X with massive coolers and additional PCIe power feeds are power limited, due to specific performance curves set in their firmware. 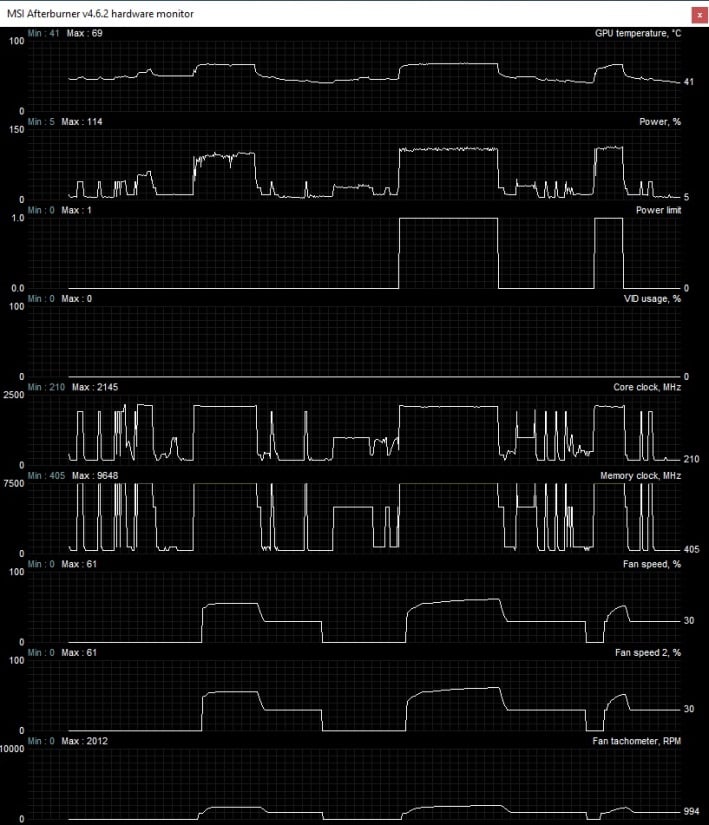 NVIDIA offers an automatic overclocking scanner tool should users want to generate a specifically tailored frequency and voltage curve for their card. But, you can also overclock manually, which is what we did here. In lieu of using the NVIDIA Scanner, we kept things simple and used the frequency and voltage offsets, and the power and temperature target sliders, available in MSI's Afterburner utility, to manually push the MSI GeForce RTX 3080 SUPRIM X beyond its stock specifications.

First, we cranked up the temperature and power targets, and pushed the voltage up, then we increased the GPU and memory clock offsets until the test system was no longer stable, showed on-screen artifacts, or performance peaked due to hitting the power limit. With the MSI GeForce RTX 3080 SUPRIM X, the power target can be increased by 14%, the temperature target from 83°C to 90°C, and the GPU voltage can be raised by up to .1v. 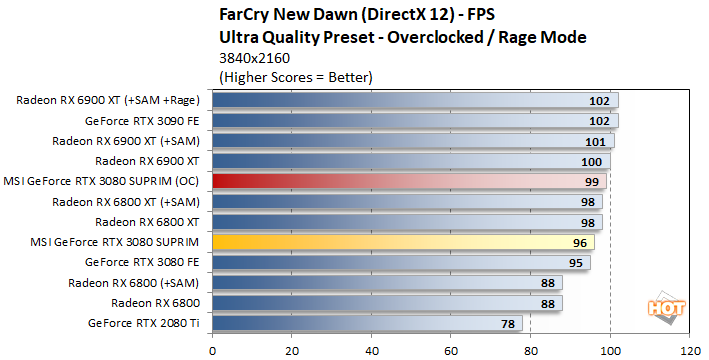 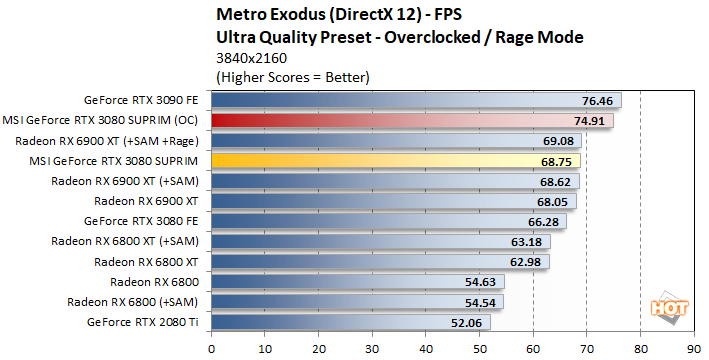 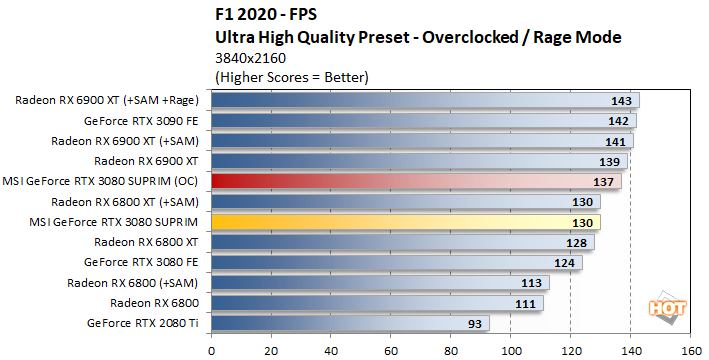 While we had our card overclocked, we saw peak GPU Boost frequencies of nearly 2.15GHz, with an effective 19.3Gbps memory data rate. At those higher clocks, we saw some nice performance increases, which put the MSI card closer to the higher-performing and more expensive GeForce RTX 3090. And throughout all of our testing the MSI card's peak GPU temperature never exceeded 69°C -- this card runs very cool, relatively speaking. 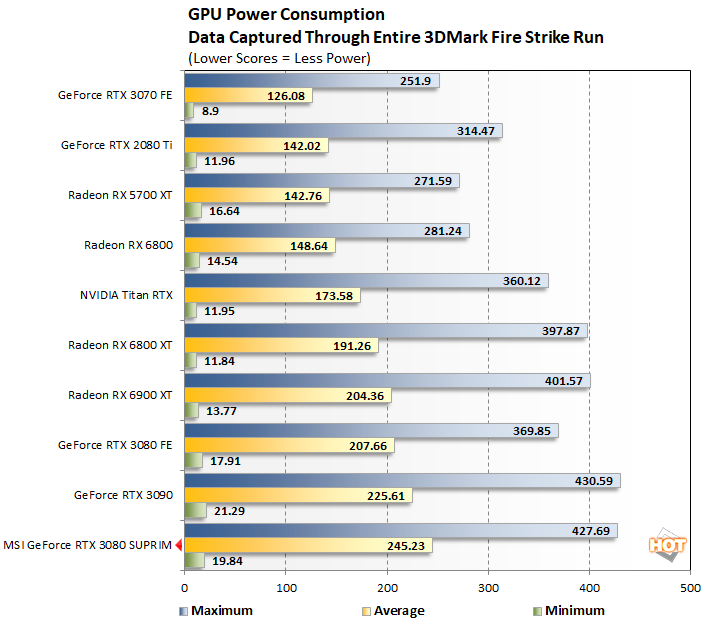 The MSI GeForce RTX 3080 SUPRIM X ended up consuming slightly more average power than the GeForce RTX 3090 Founders Edition card, though it used slightly less peak power. That's a significant jump over the "stock" GeForce RTX 3080 FE, but with the highly-capable cooler and additional feeds on this card, and a power delta of less than 40 watts, it's not really something to be concerned about.

In our real-world setup (we tested the GPU inside a chassis), our test rig remained quiet throughout testing. The fans on the MSI GeForce RTX 3080 SUPRIM X stop completely under idle conditions or when temperatures are low, so the card doesn't output any sound whatsoever. Under load, the fans do spin up but are barely audible over the other components in our test system. We should note that we tested the card in Game mode, which has a slightly more aggressive fan curve. In Silent mode, the card is somewhat quieter, but temperatures will also be higher. Performance is essentially unchanged, but in Silent mode, the GPU temperature will inch closer to the 80°C range at stock settings.

The MSI GeForce RTX 3080 SUPRIM X is one heck of a graphics card. If you have a system that can handle its gargantuan proportions -- the card is over 13" long and 5.5" high -- it is easily one of the more impressive GeForce RTX 3080 cards on the market in our opinion. The card uses premium materials throughout, runs cool and quiet, and is highly tweakable with significant power and thermal headroom to spare. Aesthetically, we like the look the MSI GeForce RTX 3080 SUPRIM X, but your tastes may vary. It is definitely a head-turner though. 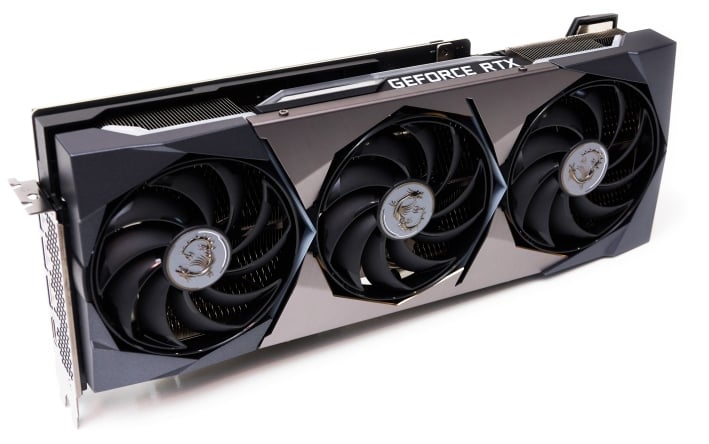 The MSRP of the MSI GeForce RTX 3080 SUPRIM X is $899, which is significantly higher than NVIDIA's Founders Edition. For the slight performance improvement, we suspect that kind of premium is going to be tough to justify for some folks, but we'd consider this card to be one of the more aggressive GeForce RTX 3080 options available, and it will provide ample opportunity for enthusiasts to tweak and tune performance. Then again, with the current GPU availability woes, finding one of these cards anywhere close to MSRP is a near impossibility, which is unfortunate. On its merit though, we really like the MSI GeForce RTX 3080 SUPRIM X. It's kind of big and it commands a premium, but it is one of the most desirable, GeForce RTX 3080s yet.