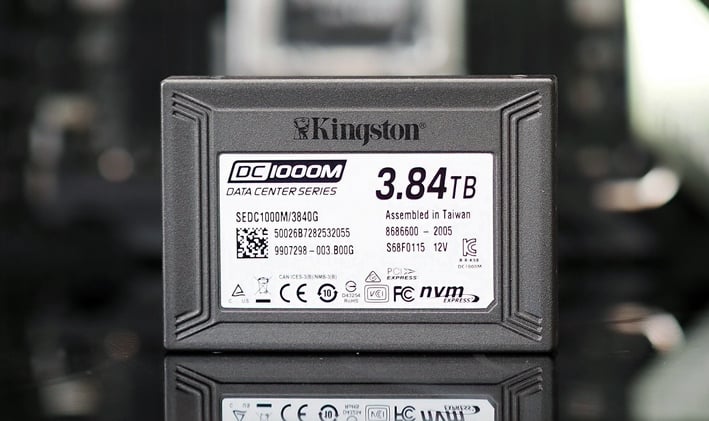 There are four drives in the initial Kingston DC1000M family, bookended by a 960GB model and the aforementioned 7.68TB behemoth. We’ve got a 3.84TB model on hand, which we’ll be showing you here. If you peruse the drives’ main features and specifications below, you’ll see very little separates the drive models, save for differing write speeds and IO performance. Take a peek for yourself and then we’ll dig in a little deeper and see how the Kingston DC1000M performs in comparison to a couple of its peers... 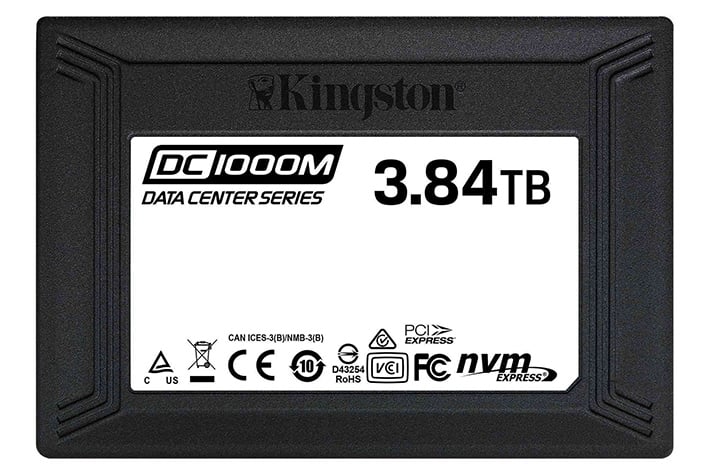 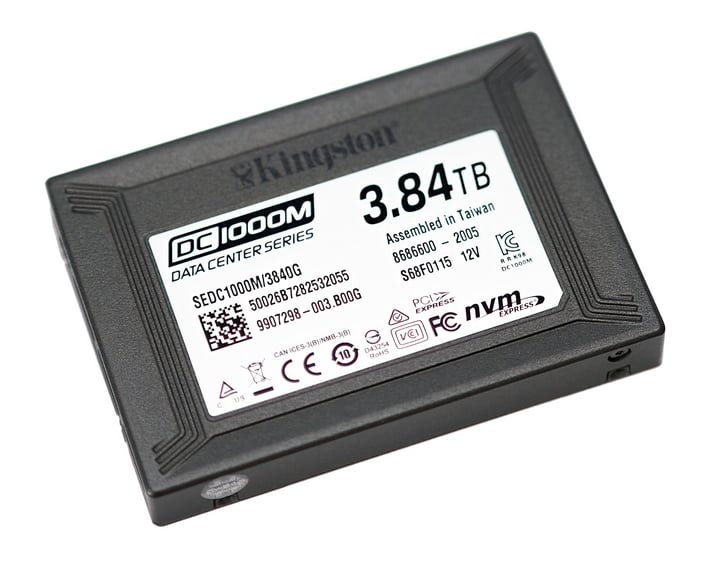 Kingston’s specifications claim the DC1000M is designed to deliver up to 540K IOPS of random read performance with QoS designed to ensure “predictable random IO performance as well as predictable latencies over a wide range of workloads.” 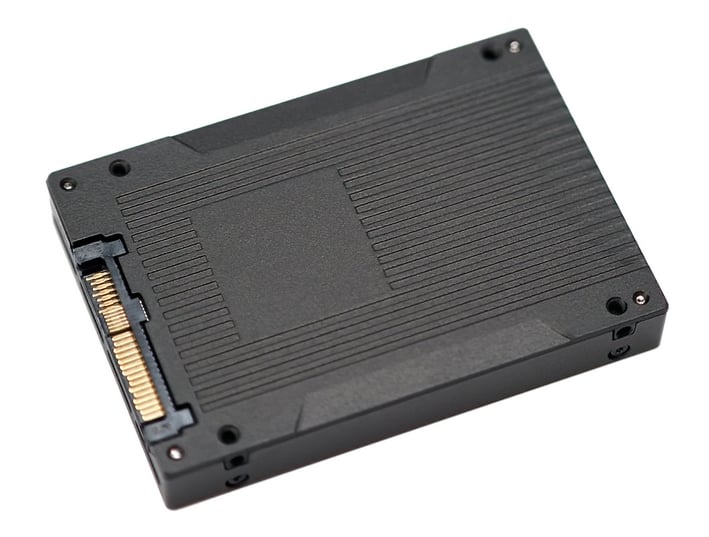 Endurance is rated for 1 DWPD (Drive Write Per Day) for 5 years with a 2 million hour mean time before failure. Of course, the drives offer reliability and usage statistics tracking, SMART monitoring, static and dynamic wear leveling, and temperature sensors, which are important to data center use cases. They also offer end-to-end power loss protection as well. 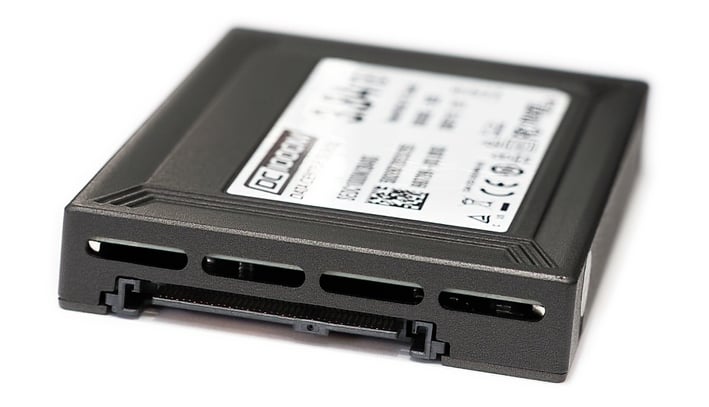 Power consumption varies depending on the capacity, but ranges from the low 5W to 6W range for average reads and writes to a range of 9.8W – 17.88W for maximum writes. All of the drives carry a limited 5-year warranty, which is fairly standard for this class of product.

Our Test Methods: Under each test condition, the SSDs tested here were installed as secondary volumes in our testbed, with a separate drive used for the OS and benchmark installations. Our testbed's motherboard was updated with the latest BIOS available at the time of publication and drives were left blank without partitions for some tests, while others required them to be partitioned and formatted, as is the case with the ATTO, SANDRA, and CrystalDiskMark tests. Windows firewall, automatic updates, and screen savers were all disabled before testing and Windows 10 Quiet Hours / Focus Assist was enabled to prevent any potential interruptions. 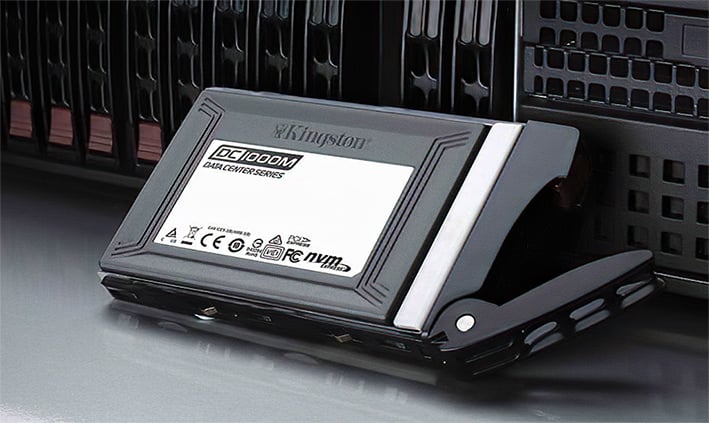 In all test runs, we rebooted the system, ensured all temp and prefetch data was purged, waited several minutes for drive activity to settle and for the system to reach an idle state before invoking a test. All of the drives featured here were tested with their own NVMe drivers installed where possible / available, but the default Windows 10 NVMe driver was used when a proprietary driver was unavailable. Also note, we have completely revamped our test bed, so the numbers shown in this review aren’t comparable to previous articles. All of the drives here have also been updated to their latest firmware and drivers as of the date of publication. 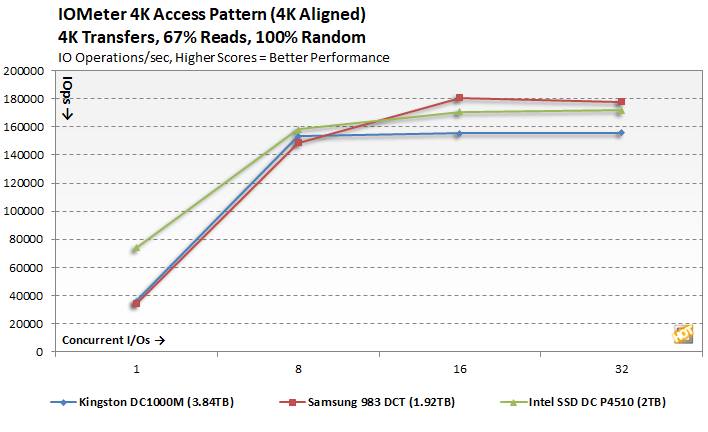 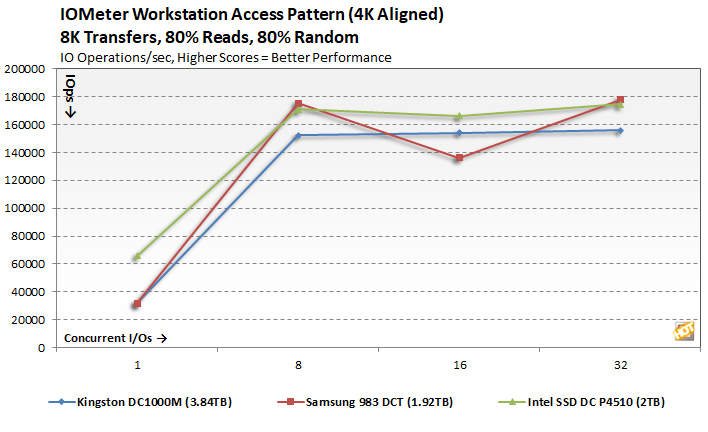 As you can see, the Intel drive leads the pack here at the lowest queue depths, but as the workload increases the Samsung drives pulls ahead overall. The Kingston DC1000M is competitive with the Samsung 983 DCT, but save for the QD16 test with the 8K / 80 / 80 access pattern, the DC1000M trails overall. 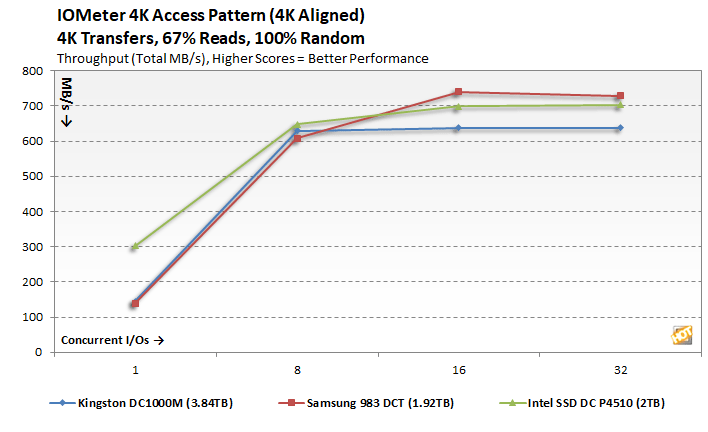 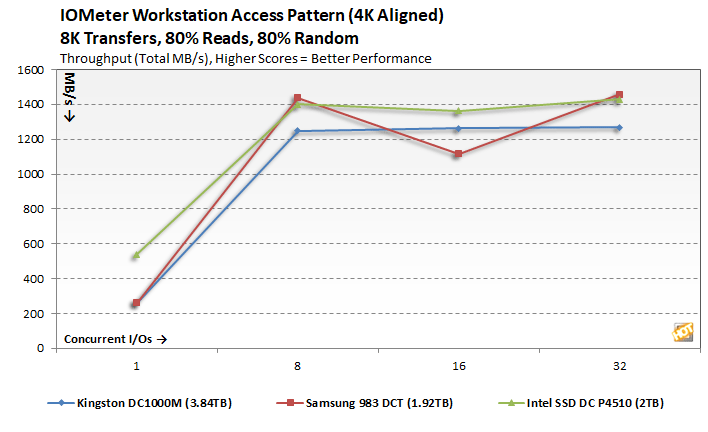 The actual bandwidth numbers are exactly in-line with the number of peak IOs, so the lines in the charts look identical. What you'll note is that 100% random 4K transfers trail the workstation access patter, which incorporates 20% sequential transfers, but the overall performance trend is exactly the same as the previous set of charts. 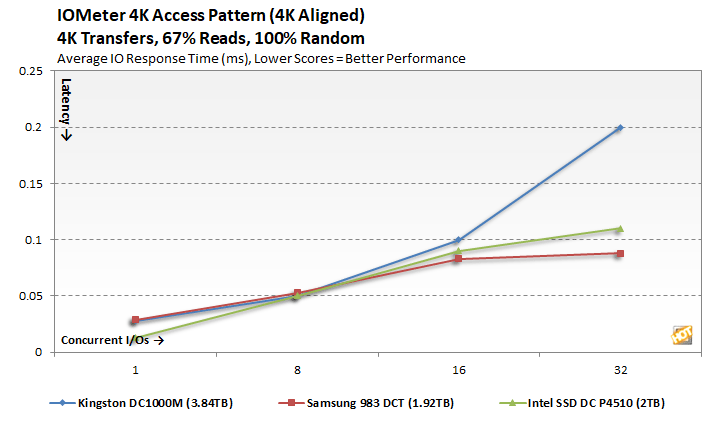 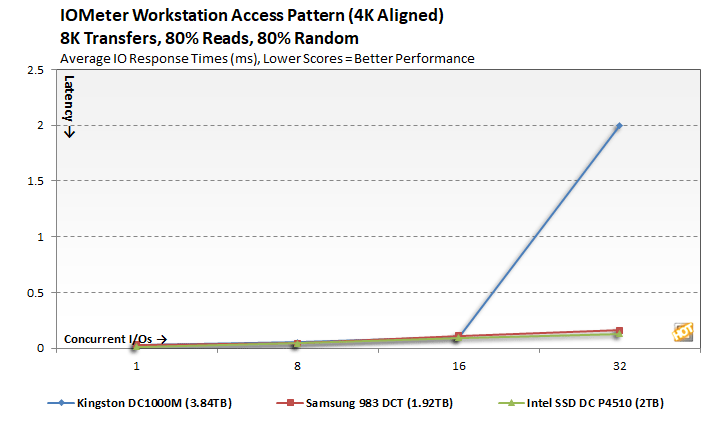 Latency characteristics for the drives we tested here are competitive, until we hit the highest queue depth. At QD32, the Kingston DC1000M's latency increases significantly. 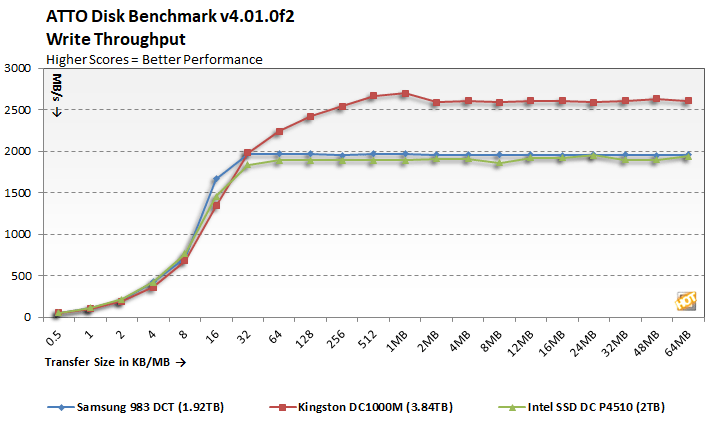 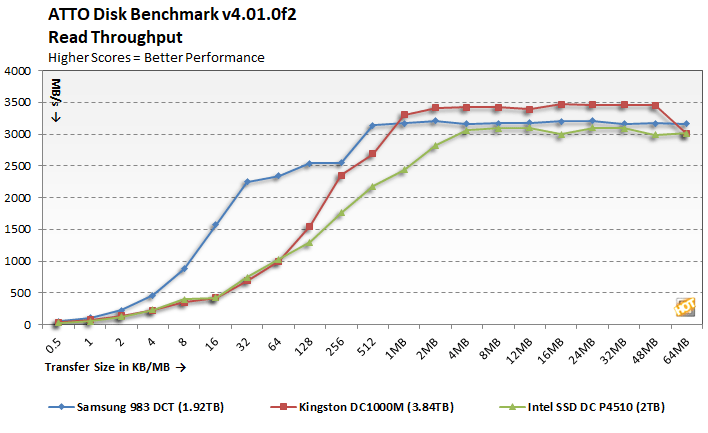 In terms of overall throughput, the Kingston DC1000M leads the pack according to ATTO, in both the read and write tests, once it hits the larger transfer sizes. Samsung's drive is optimized for read performance at the smaller block sizes, but Kingston ends up in the lead once the drive hit the 1MB mark. 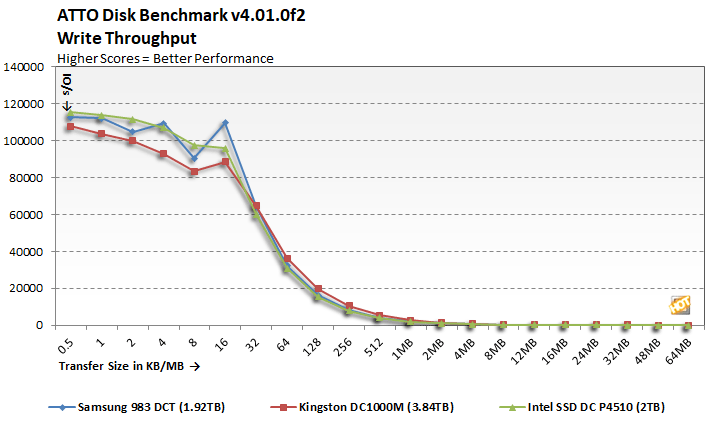 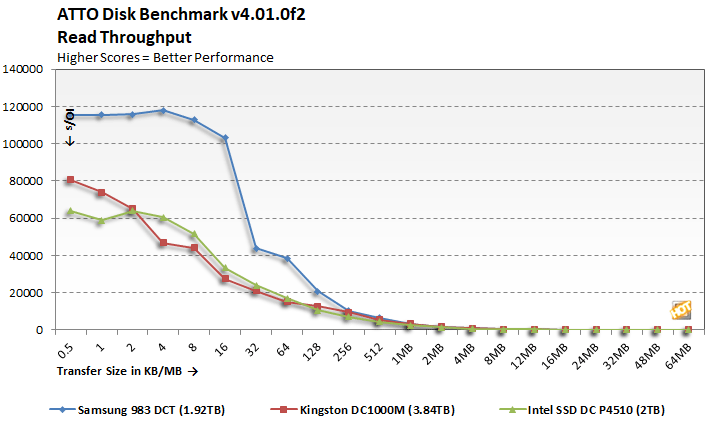 Peak IOs also look fairly different across the drives. All of the drives represented here flatlined at about the 1MB transfer size, but with smaller transfers there are clear deltas separating them all. The Samsung 983 DCT drive offered clearly superior read performance, while the Intel and Kingston drives battle it out depending on the transfer size.
NEXT PAGE