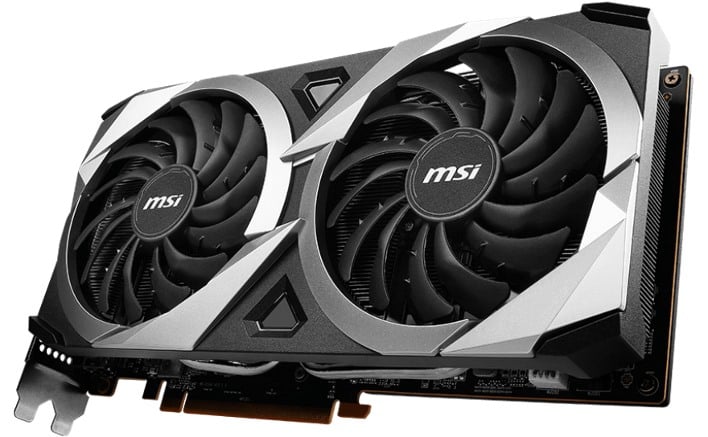 One of the biggest differentiators of the Radeon RX 6000 family, and by extension of the RDNA 2 graphics architecture, is its reliance on a large local cache—known officially as "Infinity Cache"—to provide rapid framebuffer access. This helps to make up for the relatively slower memory used on the cards in comparison to competitor NVIDIA's GPUs.

Indeed, at higher resolutions, the Infinity Cache is insufficient, and we see even AMD's fastest GPUs start to fall down a bit as the GPU has to spend more time waiting on the 16Gbps GDDR6 memory. This characteristic makes the Radeon RX 6000 cards uniquely well-suited to playing at relatively low resolutions—FHD 1080p, QHD 1440p—but at high framerates.


When we reviewed the Radeon RX 6700 XT on its release back in March of last year, we noted that it offered excellent performance in 2560×1440 resolution, but that it fell off somewhat at resolutions above that. More and more gamers are moving to high-resolution monitors now, though, with UHD (3840×2160) and WQHD (3440×1440) displays becoming ever more common.

That may be one reason that AMD has chosen to launch a refresh of three of its Radeon RX 6000 GPUs now, in Q2 of 2022. Another reason might be that the original RDNA 2 GPUs launched back in 2020, and the company is having a hard time finding the 16Gbps GDDR6 memory to keep building them. So, rather than hope for a chip partner like Hynix or Micron to keep making the older memory, why not launch a refresh with faster 18Gbps RAM?

Whatever the reasoning, this is where we're at: reviewing the MSI Radeon RX 6750 XT MECH. This card was graciously provided by MSI, as AMD is not producing its own versions of Radeon "xx50" cards, so thanks to MSI for setting us up to review the card.

First up, let's check out the specifications on the new model: 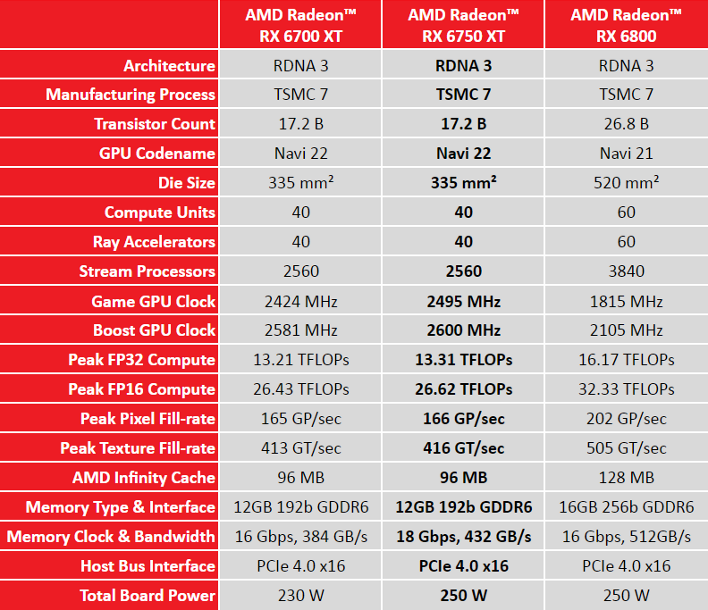 As you can see, there isn't much that separates the new RX 6750 XT from the 6700 XT. These cards use the exact same GPUs, drivers, and probably the exact same PCBs as the original RX 6700 XT boards. The only real difference is the bump in memory speed, from 16Gbps per-pin to 18Gbps. There's also a small bump in core clocks, but the difference in TBP is more notable—the higher TBP will allow the card to boost higher. The specific MSI Radeon RX 6750 XT MECH card that we have here nets a 18MHz bump to the boost clock, but is otherwise identical to the specifications AMD gives. 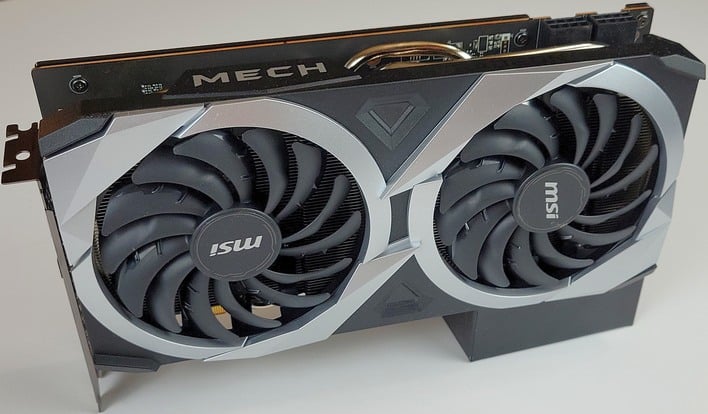 Note how the board and cooler extend rather far above the rear case bracket.


However, the design is quite far removed aesthetically from the AMD reference cards for the original RX 6000 series. It features an unusually tall PCB, along with a wide dual-fan cooler to match. It's not an unattractive design, but without flashing lights or reflective metal surfaces, there's really not much to catch the eye, which may be to some folks' preference. 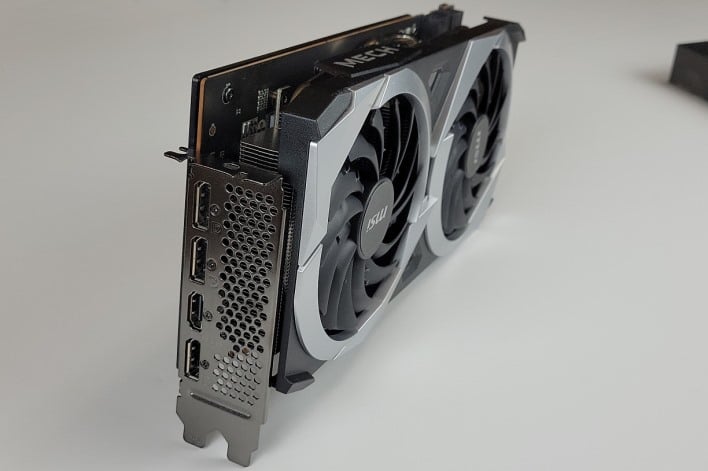 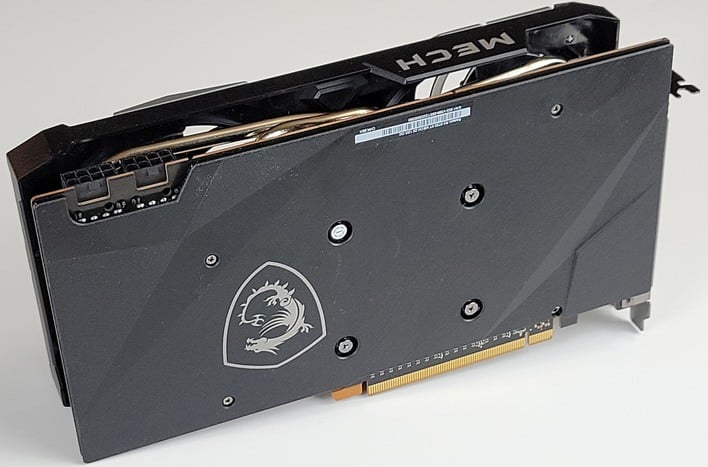 The back of the card is covered in a protective backplate, although it's made from insulating plastic rather than conductive metal. We'd mark points off if this were a hotter-running GPU, because the plastic plate is going to restrict airflow to the back of the card, but it's not a problem for this model. Indeed, the plastic plate makes the card very easy to handle without taking extra care to avoid ESD.

The MSI Dragon Army logo on the back is simply printed on, but that's fine; this is a mainstream card, after all. From this back angle, you can also see the dual 8-pin power connectors. That's up to 300 watts of power from those two connectors, plus the 75 W that the card can pull from the PCIe slot. This power layout is a little excessive, but the high power draw of the 18Gbps GDDR6 memory and hot-clocked GPU do require more power than a single 8-pin connector can provide, and anyway, it's better to have too much power on-tap than not enough. 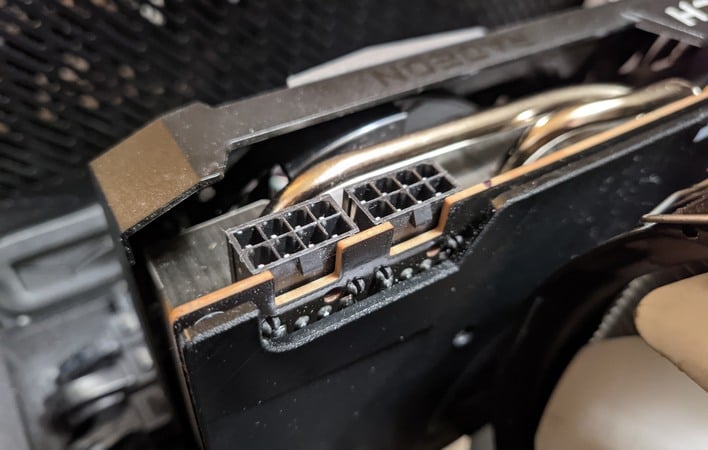 That said, our complaint with the power connectors isn't that there are two of them, nor that they're both 8-pins, but rather that the extra-tall height of the card combined with the backwards orientation of the connectors can make them tricky to connect to in certain chassis. In particular, in our testbed's Fractal Design Define R6, the PSU cables were just barely able to reach the top of the tall card.

Anyway, that's enough gawping at the thing; it didn't dress up for a model shoot, anyway. So, let's see how it performs.