There has been a lot of chatter about the Xbox Series X and PlayStation 5, a pair of next-generation consoles from Microsoft and Sony, respectively. Both have already been announced, but there is also talk there being two game consoles by each company, including a PlayStation 5 Pro and, as it relates to this latest leak, an Xbox Series S (otherwise known as Lockhart).
Let's start from the beginning. Both the Xbox Series X and PlayStation 5 are confirmed to be running custom AMD silicon, which will pair the company's Zen 2 CPU cores with Navi graphics. These next-gen consoles will also come equipped with solid state drive storage and hardware-level support for real-time ray tracing.
Microsoft recently revealed that the Xbox Series X will harness 12 TFLOPS of graphics power from the GPU alone (not a combined metric of the GPU and CPU). We can't discern a whole lot from TFLOPS alone, but since we know it's based on RDNA 2, we can reasonably deduce it will be faster than a Radeon RX 5700 XT, and perhaps on par with (or a bit faster) than a GeForce RTX 2080 (though it remains to be seen how AMD's real-time ray tracing hardware stacks up with NVIDIA's RT cores).
Rumor has it there will be a PS5 Pro that could be even faster. We'll have to wait and see. On the flip side, YouTuber Dealer Gaming claims to have the skinny the Xbox Series S. 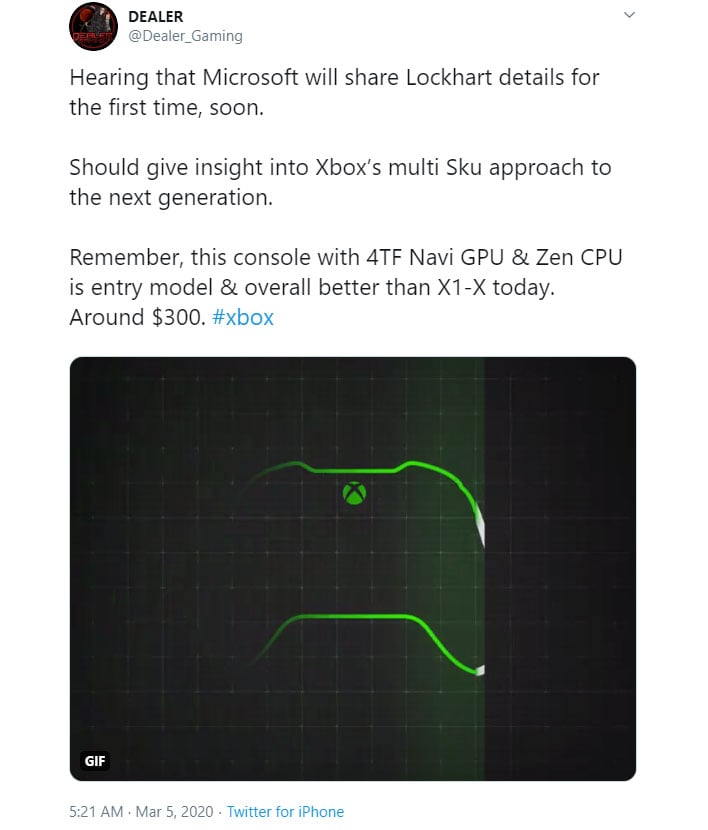 "Hearing that Microsoft will share Lockhart details for the first time, soon. Should give insight in Xbox's multi-SKU approach to next-generation. Remember, this console with 4TF[LOP] Navi GPU & Zen CPU is entry model & overall better than X1-X today. Around $300," Dealer Gaming wrote on Twitter.
That is an intriguing proposition, if it turns out to be true. There's a good chance the Xbox Series X will debut at $500 (maybe more), so a cheaper version that can still surpass the Xbox One X in performance would likely be a hit with gamers.
Of course, this is merely a rumor right now. It raises several questions. For example, will the Xbox Series S debut with SSD storage or lean back on an HDD? And what other features might get axed for a cheaper price tag, like dedicated audio hardware?
We'll have to wait and see, but one thing is for sure—this is shaping up to be an interesting (and potentially explosive) year in the realm of console gaming.