Windows 11 has been a contentious launch for Microsoft. Historically speaking, when users are dissatisfied with the latest Windows release (Windows 95, Windows ME, Windows Vista), the next release is usually met with relative enthusiasm. Yet, while Windows 10 isn't exactly beloved by most users, Windows 11 isn't either.


We could write chapters and verses about why this is the case, but that's neither here nor there. The point is, a lot of people are choosing to stick to Windows 10, even if they aren't particularly fond of it. Better the devil you know, we suppose. However, Intel and AMD both recommend Windows 11 for their latest hardware, with Intel explaining that only Windows 11 understands the hybrid nature of its current CPUs and is thus able to correctly schedule tasks to the big and little cores of Alder Lake.


Does it really matter? Well, not for gaming. In our informal testing, the performance difference is basically negligible as long as you disable performance-sapping features like Virtualization-Based Security. We haven't tested productivity, but fortunately, pro system vendor Puget Systems just decided to re-test Windows 11 after the first eight months of updates. Puget's testing centers on content creation tasks in applications like the Adobe suite, Blender, and Unreal Engine.


The company tested both AMD and Intel machines, including a Ryzen 9 5950X, a Core i9-12900K, and two massive Threadripper Pro chips. All of the machines were equipped with a GeForce RTX 3080 GPU to level the playing field, as well as gobs of fast DDR4 or DDR5 memory. Notably, Puget disabled both Virtualization-Based Security and Windows' Game Mode for its testing.


Aside from a couple of edge cases that are clearly scheduling bugs on the Intel system, the difference is down to single-digit percentage points in almost every test. Unfortunately, which OS "wins" varies from test to test, and Puget says that most of these differences are likely within run-to-run variance, meaning that the final results are basically margin-of-error. 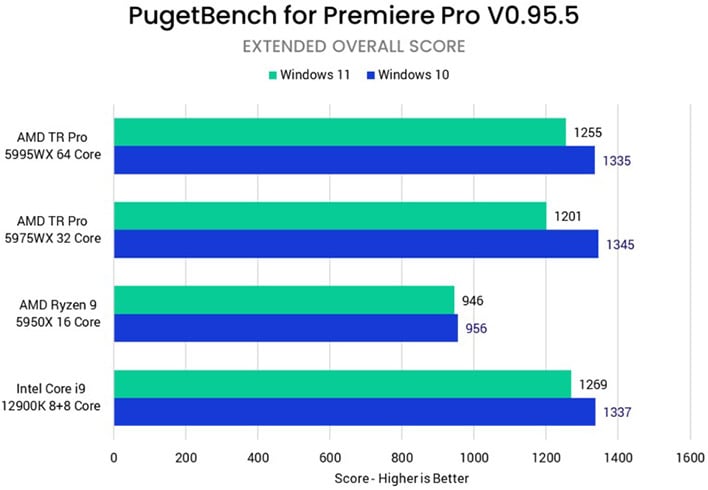 So what's the bottom line? Overall, Puget found a 1% advantage for Windows 11. That's not much difference, especially considering some of the frustrations of using the new OS, but it really doesn't tell the whole story. Some applications benefit significantly from Windows 11's under-the-hood updates, while others run much better on Windows 10. If you're considering a workstation purchase, you might do well to hit the article yourself and pore over the results.
Sadly, Puget didn't compare the Windows rigs to Linux, but much of the productivity software in question won't run on Linux anyway.