We love to watch a good dogfight, especially when the two opponents can be considered rivals. You know, Celtics versus Lakers (go Celtics!), Red Sox versus Yankees (go Red Sox!), and so forth. In the realm of tech, there's Windows versus Linux on the software side, and a new set of benchmarks pit the two against each other to see which is faster.
The folks at Phoronix are the ones who conducted the testing on an Intel 12th Gen Alder Lake platform. They chose the Core i9-12900K, which stood as Intel's flagship consumer desktop CPU until the Core i9-12900KS came out, and surrounded it with an ASUS ROG Strix Z690-E Gaming WiFi motherboard, 32GB (2x16GB) of DDR5-6000 RAM, a 500GB WD Black SN850 SSD, and a Radeon RX 6800 XT graphics card.
By all means, that's a killer configuration that should excel at just about anything you throw at it, from high resolution gaming to content creation and productivity chores. For the performance comparison, the site ran a bunch of benchmarks in Windows 11 Pro, Ubuntu 22.04 LTS, Ubuntu 22.04 LTS with the Linux 5.18 stable kernel, and Intel's Clear Linux 36580.
Consider this another rematch, if you will. Back in February, the same site performed a similar showdown and as we summed up at the time, Linux ran circles around Windows 11. It's more nuanced than that, of course, but out of 104 tests, Windows 11 came out on top just 14 times. Clear Linux dominated with 66 victories, while Windows 11 finished dead last among the distros 37.5 percent of the time.

Have things changed since then? You might be surprised that they have not. Or maybe you're not surprised. Either way, the latest round of testing between Windows 11 (now that it's had time to mature) and Linux still favors the latter (like in the benchmark above).

Of course, the type of benchmarks matter, and this is not a gaming evaluation by any stretch. But out of the ones the site chose that look at workstation virtualization, compression, rendering, video encoding, and so forth Linux still proved faster. 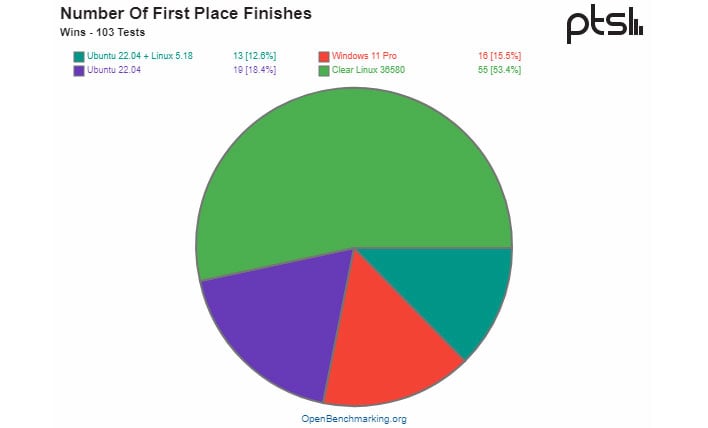 Looking at the cumulative results of the Windows 11 versus Linux showdown, Ubuntu 22.04 LTS was around 4 percent faster than Windows 11, while Clear Linux widened the gap to 8 percent. And this time around, Windows 11 came in last among the four distros a whopping 72 percent of the time. These are averages across more than 100 benchmarks.
The site concluded that "Intel Alder Lake is much more competitive these days against Windows than at launch last year," and it's hard to argue otherwise.