If you read that headline and thought, "wait, what is that model number?" then you're exactly the audience for this post. Indeed, there is no Ryzen Threadripper 5990X. AMD quietly canceled the consumer version of its Threadripper processors, and the chips codenamed "Chagall" only came to market in "PRO" form. Those chips are still overclockable in specific configurations, but they aren't available in the DIY market yet.


Instead, what veteran overclocker SkatterBencher has bolted into his ASUS ROG Zenith II Extreme Alpha sTRX40 motherboard is an AMD engineering sample with the number "100-000000443-40_Y". It's an early sample of Chagall, which was the codename for the fourth-generation Threadripper CPUs. This chip is basically like four Ryzen 9 5950X processors bolted together under a single heat-spreader, with a whopping sixty-four Zen 3 CPU cores running at up to 4.45 GHz, and that's before Precision Boost Overdrive kicks in. 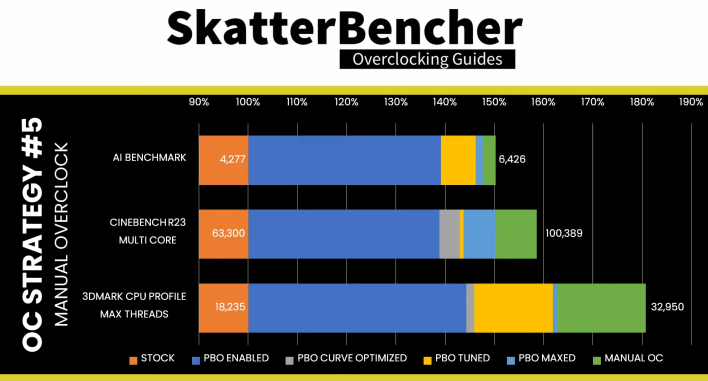 So what does an overclocker do when presented with a ludicrously powerful unreleased CPU? Well, he overclocks the dickens out of it, that's what he does. SkatterBencher's video is presented, like many of his videos, as a tutorial for overclocking this ultra-rare CPU which you almost certainly don't have access to. He goes through several methods of overclocking the "5990X", including three separate settings for Precision Boost Overdrive 2 before finally getting his hands dirty with a full manual overclock.


His final achieved clock rate was 4825 MHz across all 64 cores, which is a frankly ludicrous number. His primary limiting factors on his overclock were the CPU temperature—limited by his water temperature, as a pair of massive radiators struggled to remove all the heat from the coolant—and the capabilities of the VRM on the ASUS motherboard. At peak load, the processor was more than happy to draw over 800 Amps from the motherboard VRM, which would cause it to give up the ghost and shut down.

The video itself is nearly an hour long and references his other content quite a bit, so it's a bit of an involved watch, but the content is fascinating if you want to learn about what is assuredly the world's fastest desktop CPU, so we recommend checking it out if you have the time.