Are you a PC gamer frustrated with the lack of graphics cards? Maybe you're looking forward to buying a brand-new pre-built PC with Windows 11 soon (it launches this Tuesday, after all). Well, this news may give you pause. The new operating system brings an apparently intense focus on system security, and as is common for technologies that center on security, it could have an adverse effect on performance.

For pre-built systems, Windows 11 will ship with Virtualization-Based Security (VBS) enabled by default, and according to a new report from PC Gamer, that security feature can absolutely tank gaming performance. The publication was first alerted to the issue by the organization formerly known as Underwriters Laboratories, better known now simply as "UL." UL owns 3DMark, and the firm reached out to let them know that the full 3DMark suite supports Windows 11, but included a note about the performance impact of VBS.

Curious to see the effects for himself, PC Gamer's Dave James ran a quick set of benchmarks on Windows 11 with VBS on and off. Using an Intel Core i7-10700K and a GeForce RTX 3060 Ti card, he tested 3DMark Time Spy, Far Cry New Dawn, Metro Exodus, Shadow of the Tomb Raider, and Horizon: Zero Dawn. As it turns out, Far Cry was the only game that didn't see a huge drop in performance, and even that game fell off by a few percentage points.


The other results were more dire. A drop of 10% in 3DMark doesn't matter much to most folks, but 24% less performance in Metro Exodus, 25% worse performance in Horizon: Zero Dawn, and 28% degraded frame delivery in Shadow of the Tomb Raider might give you some pause. Obviously, this a very small sample set, and these tests were only run on a single machine, so it's certainly possible that these are non-representative benchmark results, or that the pre-release nature of Windows 11 is more likely the root cause. 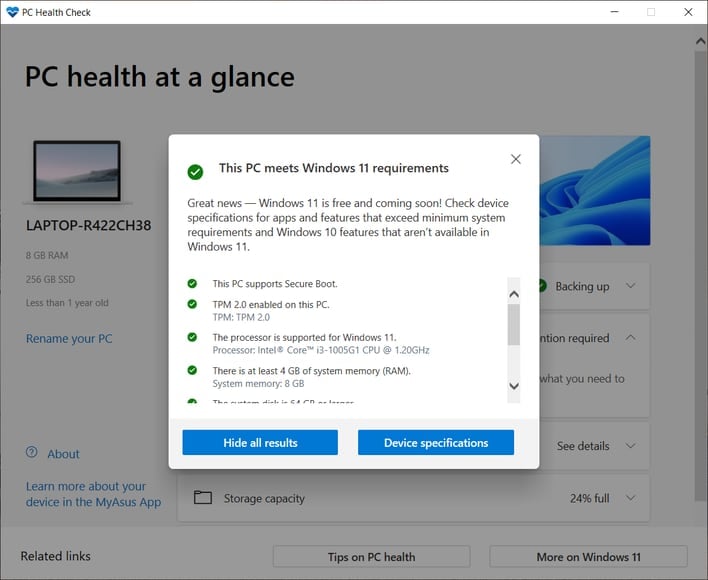 It's also possible that Windows 11 on pre-built PCs will simply run games 2/3 as well as they should, thanks to overzealous security measures. For its part, Microsoft notes that the US DoD already requires these protections for any PCs it uses, and that it thinks the security benefits are worth the performance hit. Support for this feature is apparently the main reason for the bizarre and seemingly-arbitrary system requirements for Windows 11.

It's important to note that even though there is no control exposed for VBS in the current Windows 11 builds, it is possible to disable it with a registry tweak. Such a control could also of course appear in the final release version of the OS, perhaps as a toggle in the already-present Exploit Protection panel in extant versions of Windows.

Another key point is the reason we keep noting "pre-builts"—Microsoft will be requiring most OEMs to enable it on their systems per this notice bulletin. However, VBS is currently not enabled on fresh installs of Windows 11, and Microsoft says it won't be required for upgrades from Windows 10, unless you're upgrading from an Enterprise edition. Whether that continues to be the case remains to be seen but we will be tracking this for sure at HotHardware for a myriad of reason, including our own in-house test and benchmark methodologies.