Microsoft will officially unveil the next generation of Windows on June 24th, but the company's plans prematurely leaked yesterday. We were already relatively confident that the new operating system from Redmond would be called Windows 11, but an early ISO leaked confirming the name and a lot more.

Given that Windows 11 is likely to be one of the highest profile software releases of 2021, we were eager to get a taste of what it has to offer (at least in its current state), so we installed it on two of our in-house test laptops. In this case, we chose a Dell XPS 13 9300 complete with a 10th generation Intel Core i7-1065G7 (Ice Lake) processor and 16GB of RAM. We also opted for a Lenovo IdeaPad Slim 7 with a Ryzen 7 4800U processor onboard to tackle the AMD side of the equation.

Installing the operating system was a relatively trivial affair and nearly identical to installing Windows 10. The only difference is that Microsoft has reskinned the setup to give users something fresh to look at during the latter parts of the installation process. Once Windows 11 was installed, we were greeted by a new startup sound and a redesigned taskbar (that you can see in the top screen shot). 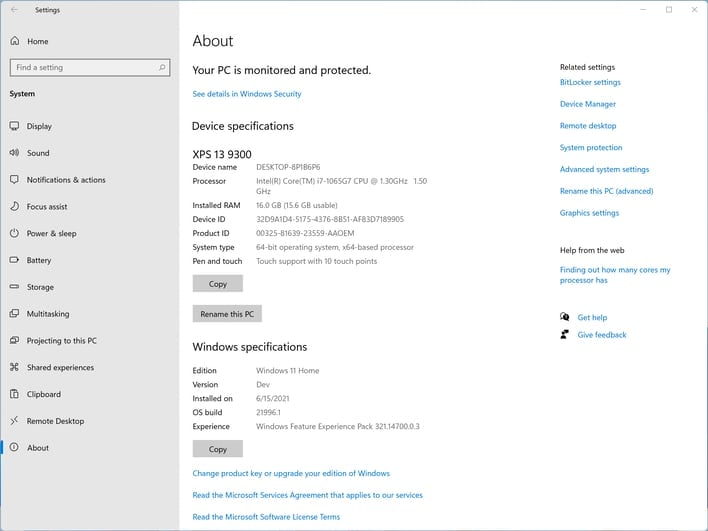 App icons are now clustered centrally on the taskbar by default, with the Start button residing in the left-most position, though the icon positioning and Start Menu style can be tweaked via the taskbar control panel. If you don't like the default central position, you can slide it over to the left, as it appears in Windows 10. App windows now have rounded edges, and new Snap controls have been included to group multiple app windows easily.

Even though this is a very early build of Windows 11 (21996.1), we still decided to crank out some benchmarks to see how Microsoft's next-generation OS compares against its nearly 6-year-old predecessor. 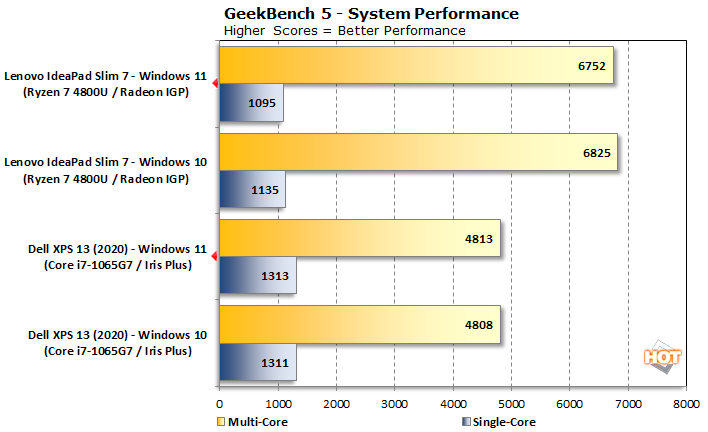 Starting with Geekbench, the numbers stacked up pretty well across both Windows 10 and Windows 11 on both test machines. All the numbers were essentially within the margin of error. 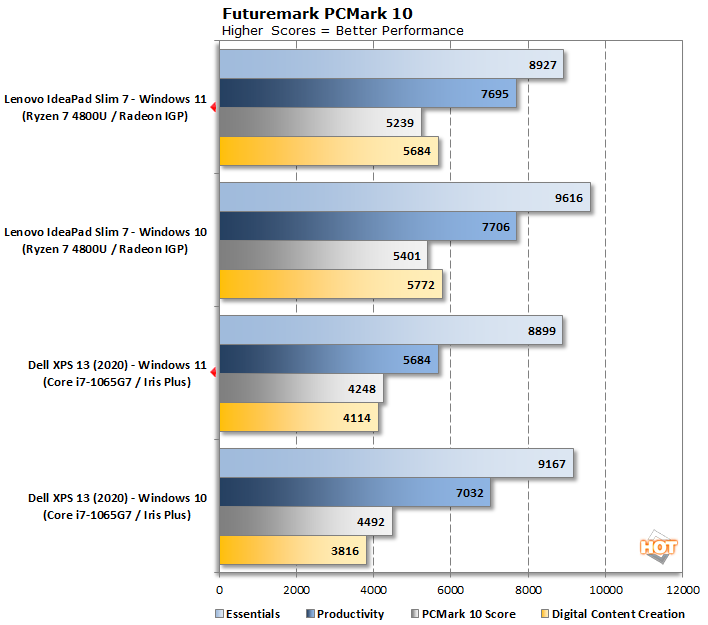 Flipping over to PCMark 10, we saw a slightly more significant variation in the score, with Windows 10 having the apparent edge in the Essentials benchmark. However, the most dramatic differences were on the Intel side, where the XPS 13 with Window 11 saw a sharp drop-off in the Productivity benchmark. At the same time, the tables flipped on the Digital Content Creation benchmark with higher scores for Windows 11 in that workload on the Intel-based system.

Moving on to Speedometer 2.0, the AMD- and Intel-based Windows 11 systems pulled off an impressive upset over their Windows 10 counterparts. However, these differences could likely be attributed to different builds of the Chrome browser. Also, we still don't know what performance optimizations Microsoft has in store for its version of Edge that will ship with Windows 11 but we've historically always tested on Chrome in our laptop database of results. In some quick comparisons, we found Edge to perform similar to Chrome on Windows 11 in this benchmark. 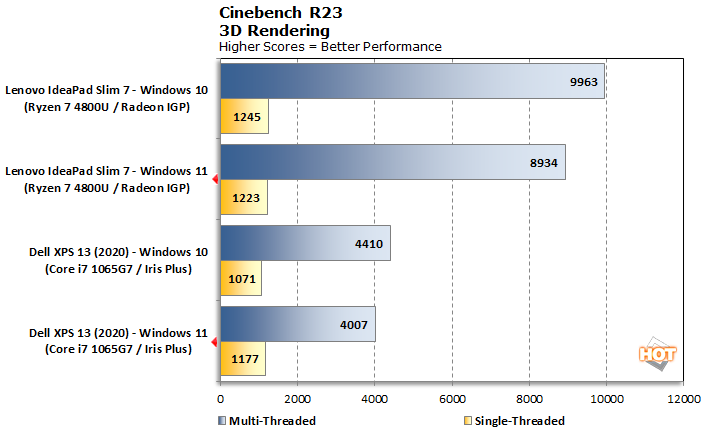 In the Cinebench R23 benchmark, single-thread scores were pretty stable across both platforms; however, that was not the case with the multi-threaded scores. There was a 10 percent across-the-board drop in performance, which is a bit puzzling. Perhaps Microsoft is still tweaking multi-threaded performance and scheduler optimization in Windows 11.

Finally, we turn to 3DMark Night Raid, where there were no surprises with the IdeaPad Slim 7 while running Windows 10 or Windows 11. However, the XPS 13 experienced a small, roughly 4 percent drop in performance with Windows 11.

Again, we need to reiterate that Windows 11 is still in a very early stage of completion, and Microsoft still has months ahead of it to fine-tune the OS and get it ready for a [expected] Fall 2021 launch. In fact, as you can see in the system detail screen shot above, the version that's floating around now is a developer build.

Regardless, we must say, we're cautiously optimistic of the current state of affairs with Windows 11, and will be tracking its expected performance gains in future builds as we come closer to its consumer launch.