Samsung has set aside August 11th for its huge Galaxy Unpacked event, which will see the debut of numerous new products, including the Galaxy Z Fold 3, Galaxy Z Flip 3, and Galaxy Watch 4 Classic.

Leading up to this highly-anticipated leak, notorious gadget leaker Evan Blass revealed 360-degree views of all the expected devices, and today, he's giving some additional specs/features for the two most prominent devices that will launch. 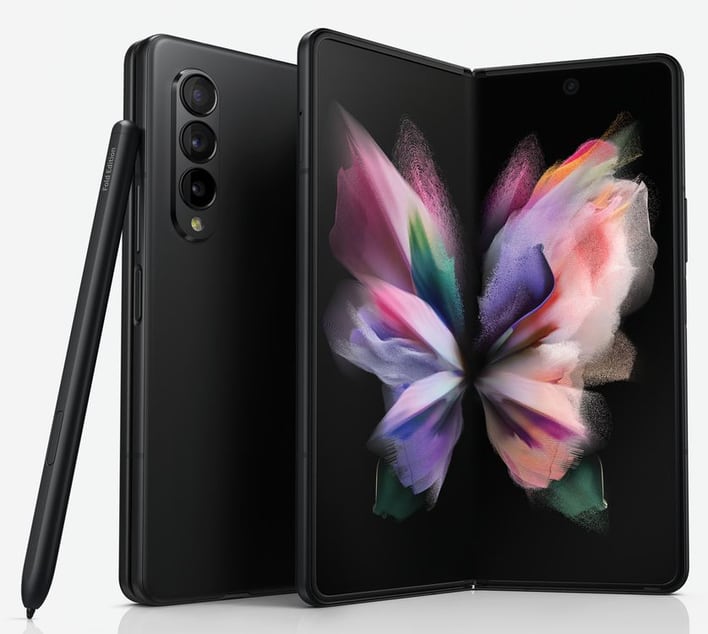 According to Blass, the flagship Galaxy Z Fold 3 will feature a 7.6-inch primary folding display and a 6.2-inch external cover display. These specs mirror what is found on the current-generation Galaxy Z Fold 2. And like its predecessor, the Galaxy Z Fold 3 will have three 12MP cameras on the back for wide, ultra-wide, and telephoto photography. However, the camera lovin' doesn't stop there. It's said that there's a 10MP selfie camera punched out of the cover display along with an additional 4MP "main" selfie camera.

Interestingly, Blass confirms that the Galaxy Z Fold 3 can be used with one of two optional S Pens. So there's an S-Pen Pro and an S-Pen Fold Edition, although he didn't get into the specifics of the accessories.

The Galaxy Z Flip 3 features a 6.7-inch primary folding display and a 1.9-inch cover display. The display is the same size as the outgoing Galaxy Z Flip 5G, while the cover display has increased dramatically from the previous 1.1 inches. Regarding cameras, Samsung is going with two 12MP cameras on the rear and a 10MP selfie camera. So we're assuming that there's going to be a lot of parts commonality between the Galaxy Z Fold 3 and the Galaxy Z Flip 3 concerning the cameras.

Finally, Blass says that the Galaxy Z Fold 3 and Galaxy Z Flip 3 are IPX8 rated for water resistance. It's also expected that both will use either the Qualcomm Snapdragon 888 or Snapdragon 888+ SoC with at least 12GB of RAM and up to 512GB of internal storage.