We've discussed leaks about the upcoming Samsung Galaxy Z Fold 3 and Galaxy Z Flip 3 for months. The current generation Galaxy Z Fold 2 and Z Flip 5G are perhaps the most high-profile folding smartphones on the planet, so their successors are highly anticipated.

Luckily for us, we've just been presented with the first official renders of the smartphones. We are confident that these are official because they come from none other than gadget leaker Evan Blass. And if Blass is going to take the time to tweet an image, you know that his sourcing is ironclad.

Looking at the first image, we see the Galaxy Z Fold 3 from the front and the back. From the front, we can see that the bezels around the folding display are relatively thin. There also appears to be a hole punch cutout for the selfie camera on the right-hand side of the middle crease. The appearance of the cutout would seem to nullify the previous rumors that the Galaxy Z Fold 3 would have an under-the-display selfie camera. 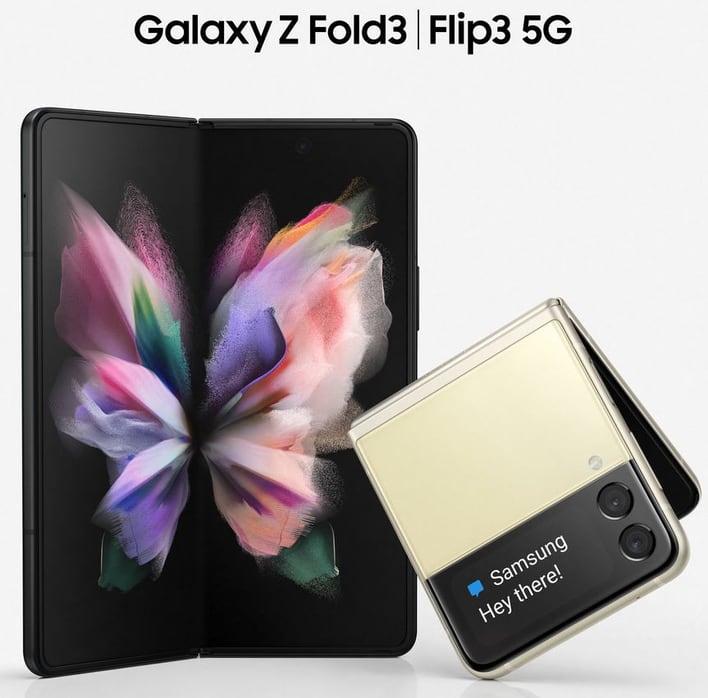 We can also get a glimpse of the Galaxy Z Fold 3 from the rear, where we find the continued use of a triple-camera setup and an LED flash. The sleek matte black device is also joined by an S Pen, conveniently labeled as the "Fold Edition."

Moving on to the Galaxy Z Flip 3, there's not much to see here. The device is only shown in a partially folded position from the back. However, we do make out what appears to be larger sensors for the dual cameras on the back, along with a much larger cover display.

It's expected that these new smartphones will feature Qualcomm's latest Snapdragon 888 flagship 5G SoC, or perhaps the unannounced [and widely expected] Snapdragon 888+.

Now that Blass has effectively kicked the door down with regards to Samsung's folding smartphone plans, perhaps we'll see a swift uptick in leaks over the next few weeks and months leading up to a probable August announcement. In the meantime, stay tuned to HotHardware for the latest info on Samsung's upcoming smartphones.