The Galaxy Buds+ have been on the market for almost a year and a half now, and it looks like they are about to get a successor. Namely, it appears Samsung is nearing the launch of its Galaxy Buds 2, based on a set of leaked press renders in the form of a few animated GIFs. The renders highlight a sleek new design and at least three color options that will be available to consumers.
As shown above, those color options include white, purple, and green. Assuming these are accurate press renders—and at this point, we have no reason to doubt Evan Blass, who posted the animated GIFs on Twitter—this is our best look yet at the upcoming wireless earbuds. They're renders and not actual product shots, but should be very close to what they end up looking like.
It's rumored the Galaxy Buds 2 will feature active noise cancellation, a feature that is noticeably absents on the Galaxy Buds+, but present on the bean-shaped Galaxy Buds Live that launched in August 2020, and the Galaxy Buds Pro that launched earlier this year. 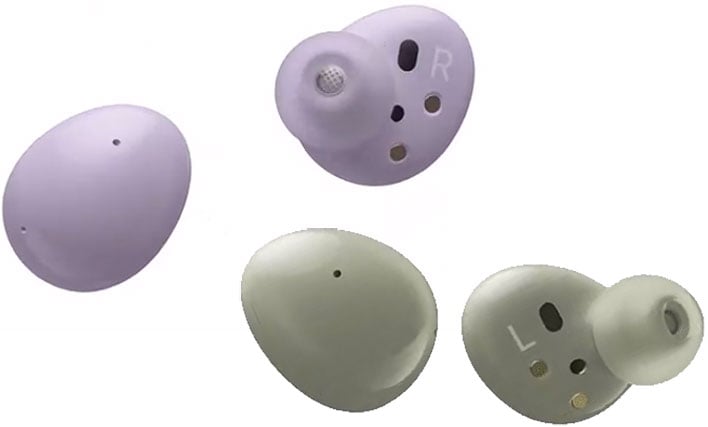 Samsung's lineup is a bit confusing, but as things stand, the Galaxy Buds Pro rank as its most advanced set of earbuds. That could change when the Galaxy Buds 2 arrive, depending on how Samsung wants to position the new product in relation to its Galaxy Buds Pro.
To that end, in addition to ANC support, another prominent leaker, Ice Universe, says they will be infused with "better bass performance." The leaker also says these will be release on August 11.
As for the Galaxy Buds 2 renders, we can make out just a few details. These are getting a more square-shaped charging case that looks similar to Apple's AirPod Pro. We can also see a pair of outward facing microphones, along with charging pins and optical wear detection sensors on the inner portion of the earbuds.
Pricing will be key here too, especially Carl Pei and his company called Nothing getting ready to shake things up with the Ear (1), a set of earbuds that promises premium build quality and ANC support for around $99.