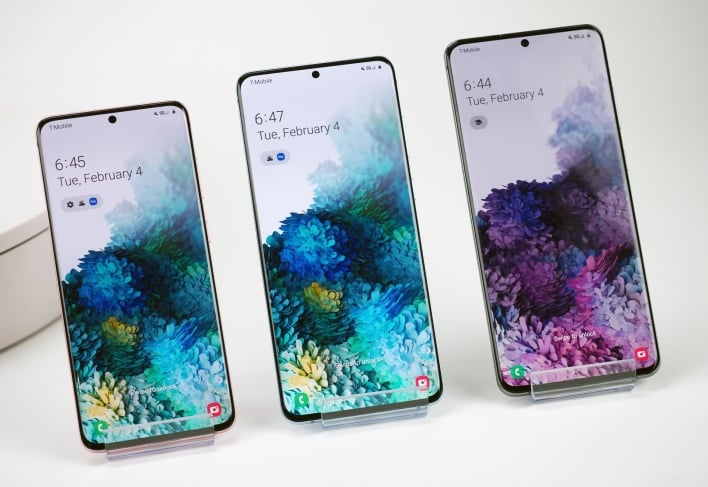 After months of speculation, leaks, and teases, Samsung is finally ready to get official with its next-generation family of flagship "Galaxy S" smartphones - and indeed they look pretty sweet. As predicted, the entire Samsung Galaxy S20 lineup is 5G-enabled from top to bottom, and consists of three new devices: the Galaxy S20, Galaxy S20+ and Galaxy S20 Ultra.

When it comes to design, unlike last year's models, all three members of the family look similar from the front and the back -- although they obviously differ in size and you can tell the Ultra's camera is something special. In general, the Galaxy S20 series is comprised of a minimalistic design, and one that is very clear evolution of what we saw with the Galaxy S10 family. All feature a single selfie camera, made possible by Samsung's Infinity-O OLED display technology, while on the back you'll find a relatively large, rectangular camera pod.

Speaking of the cameras, Samsung is placing a heavy emphasis on photography with this new generation of Galaxy S devices. The company is employing larger sensors all around to help improve low-light performance, while the Galaxy S20 and S20+ will both sport 64MP telephoto sensors. In addition, their image capture capabilities are taken to the next level with what Samsung is calling Space Zoom. On the Galaxy S20 and S20+, Space Zoom provides a 30x zoom, allowing you to get closer to your intended subject. This is made possible by a 3x hybrid optical zoom combined with artificial intelligence (AI) to bump out to 30X.

All three smartphones also include ultra-wide (12MP, f/2.2), and wide-angle (12MP, f/1.8) cameras, while the Galaxy S20+ and S20 Ultra also include a depth sensor. Samsung is touting the ability to capture "pro-grade" 8K video, which is something that Qualcomm demonstrated with prototype hardware last week. As we mentioned at the time, Samsung is using this as a perfect opportunity to extol the benefits of the Galaxy S20's video capabilities while proving how it would be a perfect fit to display that captured footage on its 8K QLED TVs. 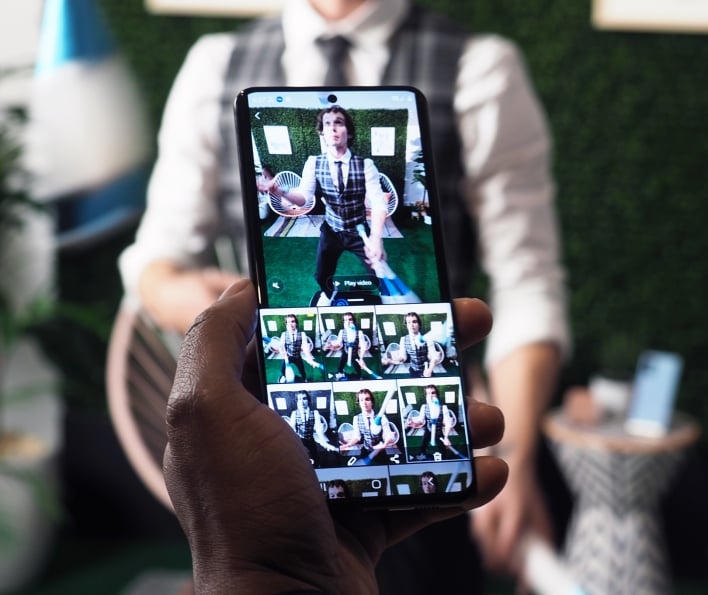 Samsung is making some big changes on the display front with the Galaxy S20 family. For starters, the gentle curves on the sides of the device, as we saw with the Galaxy S10 and Galaxy S10+, are even more subtle now. All three models now feature a near bezel-less displays with only the slightest hint of curvature in their glass along the edges. All three are also HDR10+ certified and feature a QHD+ resolution. The displays sizes get progressively larger as model price points go up and features are added, with the Galaxy S20, S20+ and S20 Ultra measuring in at 6.2 inches, 6.7 inches and 6.9 inches, respectively. 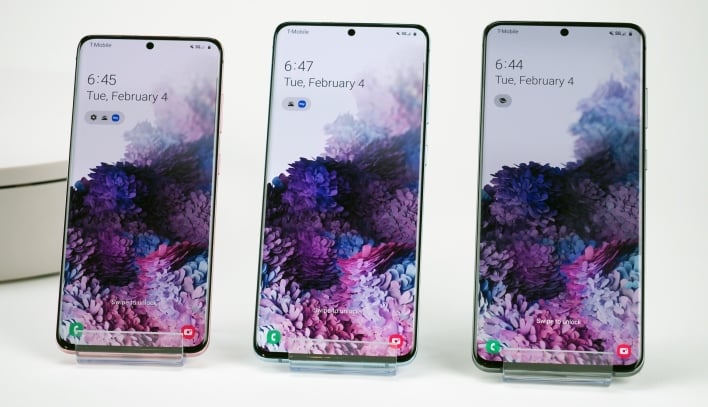 Perhaps the most anticipated new display feature, however, is support for a 120Hz refresh rate. We've seen high refresh rate displays in gaming smartphones like the ASUS ROG Phone II and the OnePlus 7 Pro, however, Samsung is finally bringing that tech to its Galaxy S family as well now. That said, Samsung notes that the screens will default to 60Hz, likely in an effort to reduce power consumption and enabling 120Hz, i.e. for gaming, will require users to first go into settings.

When it comes to horsepower, the Galaxy S20 family is among the first arriving to market with Qualcomm's new Snapdragon 865 SoC, and we're expecting big performance numbers from this new octa-core chip (as we saw in our Snapdragon 865 benchmark preview). The SoC is paired with either 12GB or a very healty 16GB of fast LPDDR5 RAM. The Galaxy S20 is only available in a 12GB/128GB (RAM/storage) configuration, while the Galaxy S20+ comes standard with 12GB RAM, but can be optioned with either 128GB or 512GB of internal storage. The Galaxy S20 Ultra comes in either 12GB/128GB or 16GB/512GB configurations. All three phones also sport a microSD slot that will accommodate up to a 1TB microSD card to expand their storage. 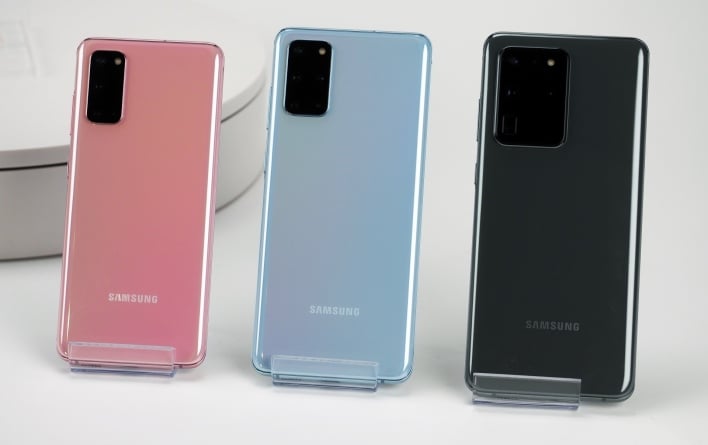 2020 is going to be the big year for 5G, as there likely won't be many new flagship devices announced without the new wireless standard on board. The Galaxy S20 is the least capable on this front, as it only supports sub-6GHz spectrum. However, the Galaxy S20+ and S20 Ultra support both sub-6GHz and mmWave. It's doubtful that the distinction will matter much -- at least in this early stage of 5G deployments -- as mmWave penetration is more limited currently. Though mmWave is faster, users have to be close to a tower to get a stable signal, and carriers like Verizon Wireless can't even blanket an entire football stadium with mmWave 5G just yet, for example.

The new Samsung Galaxy S20, S20+ and S20 Ultra will come packing 4,000 mAh, 4,500 mAh, and 5,000 mAh batteries, respectively. All support Fast Wireless Charging 2.0 along with Wireless Power Share (which allows you to use your Galaxy S20 to share its charge with another smartphone or wireless accessories like Samsung Buds + headphones). There's a single USB-C port on the bottom of the new Galaxy S20 family and no 3.5mm headphone jack to be found which may be a bummer for some folks not enamored with the wireless headphone revolution. 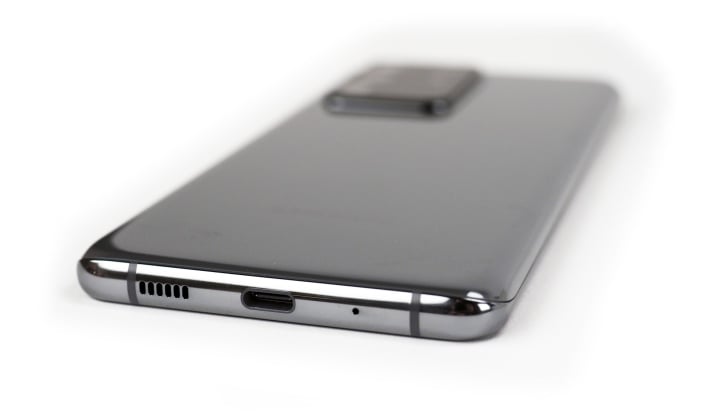 And when it comes to colors, here are the choices Samsung is making available for Galaxy S20 family:

As it stands, Samsung looks to have a three absolute beautiful phones coming to market with the Galaxy S20 family. At this point, the $1,000+ pricing no longer incites sticker shock as it did years ago. And the fact that 5G comes standard this time makes these price points easier to digest. Throw in 5G wireless connectivity, the 120Hz display, better cameras, big batteries, Space Zoom and the ability to configure a device with up to 16GB of RAM and 512GB storage – something that would be more akin to a premium notebook config – and Samsung is offering a compelling stable of hot new devices. Stay tuned as our full, hands-on review of the Galaxy S20 family will be coming soon in the coming weeks.