The current expectation in the hardware enthusiast community is that AMD and Intel's next-generation flagship chips are going to be scant percentage points away from each other in the most common benchmarks. That's informed by a number of leaks, including the Geekbench comparison last week as well as this latest leak. It stars the sixteen-core Ryzen 9 7950X CPU in a leading role demolishing the Cinebench R23 benchmark.

Originating at the Chinese-language ChipHell forums and brought to our attention by leaker HXL (@9550pro on Twitter), this latest leak is very simple: just a screenshot of Cinebench R23 after a multi-core benchmark run. The application is displaying a score of 38984 points, which is a ludicrously high result. In fact, it's just 1553 points behind our test result for the Threadripper Pro 5965WX, which is a 24-core CPU using eight-channel memory!


If we compare to the previous-generation parts, there's not even a comparison to be had. The upcoming chip is 57% faster than AMD's own Ryzen 9 5950X in this benchmark, and 37% faster than Intel's pricey Core i9-12900KS. Looking at leaks for the Core i9-13900K, however, we see an interesting story emerge. 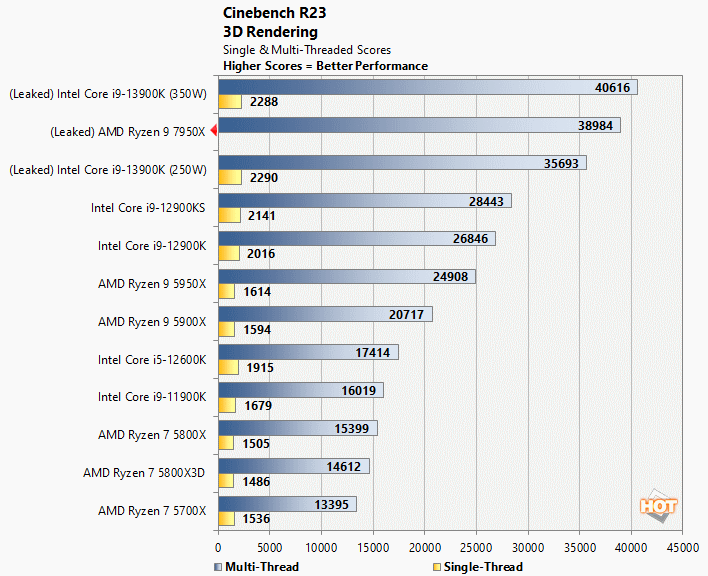 The Ryzen processor's performance outpaces the Core i9-13900K in this benchmark when that CPU is set to its default power limit. When "Extreme Performance" mode is engaged, the Raptor Lake CPU can leverage its higher core count to push past AMD's triple-chiplet design with a score of 40616.

That may not be the end of the story, though. Tweeting about the results, regular leaker Greymon55 notes that these results are with pre-release firmware, un-tuned voltage settings, and the overall polish that will come with time. According to him, scores of 40,000 should be "relatively easy." Whether he's talking about through overclocking or if that's the performance users should expect out of a tuned chip at stock speeds isn't completely clear, but we think it's probably the latter.
Of course, multi-core performance isn't the only consideration at hand. This benchmark leak doesn't include a single-threaded score, and that's arguably the more interesting result. AMD's extant Zen 3 processors trail Intel's current-generation Alder Lake chips in single-threaded performance, but AMD says Zen 4 surpasses those CPUs with ease. We'll see what happens when we have chips in hand later this year.