Intel had a lot to share during its InnovatiON event this week, which was strategically timed for its Alder Lake launch. But let's not forget, Intel is also getting into discrete graphics. To that end, the chip maker talked a bit about its upcoming Arc Alchemist graphics card, and in doing so, reconfirmed some promising specifications.
What it shared is not entirely new information. During its Architecture Day 2021 event earlier this year, Intel outlined its Xe Arc GPU roadmap, starting with Alchemist in the first quarter of next year, followed by Battlemage (Xe2 HPG), Celestial (Xe3 HPG), and Druid (Xe Next Architecture). At the time, Intel said Alchemist will wield up to eight render slices per GPU instantiation, with four cores per slice and 16 vector engines per core.
And as we noted at the time, some basic math works out to 512 vector engines in a fully populated Alchemist GPU (aka Alchemist/DG2-512). 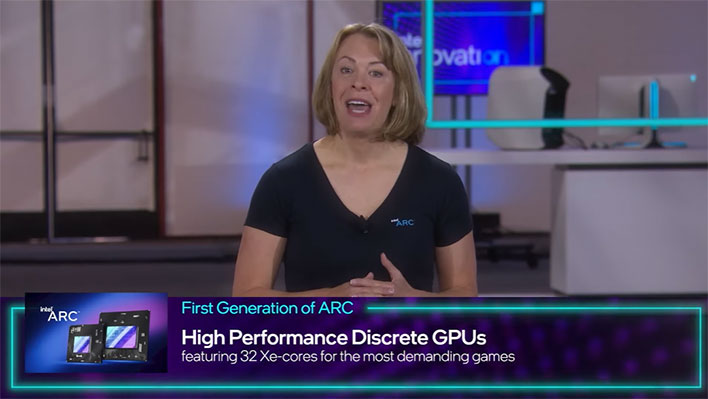 Fast forward to this week's event and Intel offered up that Arc Alchemist, which is "designed for gamers first," is being built on TSMC's N6 process. In a flagship configuration, it will boast 32 Xe cores "and includes everything needed to run the most demanding games, including support for DX12 Ultimate."
Each of those cores will have 16 vector engines, so by way of the same easy math, we arrive at 512 vector engines. Intel also reiterated hardware support for real-time ray tracing, mesh shading, variable rate shading, and dedicated matrix engines (up to 16) for AI acceleration. Intel is calling those matrix engines XMX (Xe Matrix Extension).

"These engines accelerate a new high quality and high performance rendering technique called XeSS, which applies AI to graphics and improves the performance and/or visual experience," Intel's Lisa Pearce said during the event.
Intel demonstrated XeSS running Rift Breaker upscaled from 1080p to 4K. Even with some pixel peeping (freezing and image and zooming in), the upscaled image looked markedly better in the demo. According to Pearce, Rift Break is only the first of what Intel anticipates being many games to leverage is XeSS technology.
It all looks promising. Previous rumors pegged Arc Alchemist being roughly on par with a GeForce RTX 3070 or GeForce RTX 3070 Ti. While not the fastest on the market, that would be an impressive feat for Intel's first foray into discrete graphics since Larrabee. Color us intrigued.