Proving once again that there is no such thing as true future-proofing, your power supply is about to become obsolete! Okay, that might be overstating things. However, there really is a new power connector standard on the horizon, designed for the shift to PCI Express 5.0, and with it comes the ability to draw up to 600W of power for next-generation GPUs from AMD, NVIDIA, and Intel (yes, don't forget about Intel, which is getting into discrete graphics next year).

Whether this gains widespread adoption or not, time will tell. But here's what we know. The power connector is a deviation from the typical MicroFit Molex standard. Even though it looks somewhat similar, the measurements are different, so backwards compatibility goes right out the windows. The key change is the spacing—the connectors measure 3.0mm apart, rather than 4.2mm, and the entire thing is 18.85mm long.

A company called Amphenol ICC has already posted images and schematics of the new 12VHPWR connector. As you can see in the images up top, there are 12 main pins, plus another four smaller contacts underneath the primary housing. So that is 16 pins in total, up from 12 pins on the updated connector NVIDIA has been pushing on its latest-generation Founders Edition models. 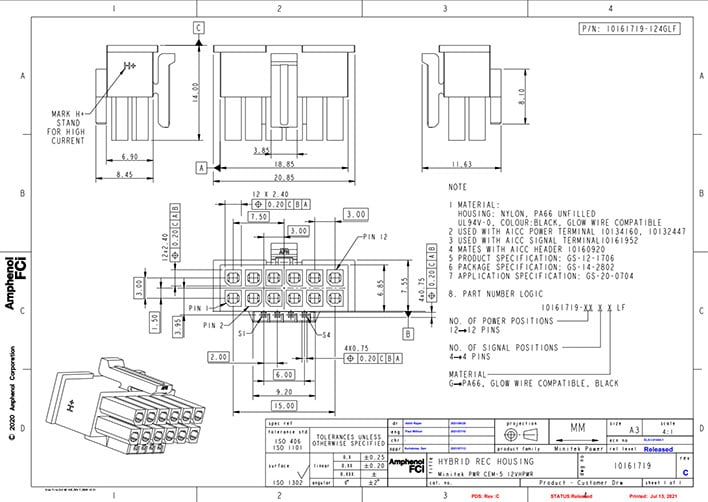 There are various diagrams to digest, but the general breakdown is that each of the power contacts can deliver 9.2 amps, resulting in 55.2 amps of juice over the all-important 12V rail. That equates to 662.4 watts, though the standard officially supports up to 600W.
This design raises several questions. One of them is what exact purpose those four smaller contacts will serve. We also don't know yet if AMD and NVIDIA will push the 12VHPWR standard on its next-gen GPUs for sure, and if so, whether it will apply to professional graphics, data center GPUs, consumer cards for gaming, or all three (or a combination of the three).
One thing to bear in mind is that only Intel is embracing PCI 5.0 in the near future. It's a very near future, as in Alder Lake and its accompanying Z690 chipset. Rumor has it (by way of leaked documents) that AMD will stick with PCIe 4.0 for another round, meaning Zen 4 will not welcome PCIe 5.0 into the fold. Plans can change, though, so we'll see.
Anyway, this new connector could muddy the waters a bit for future builds. It might also encourage GPU makers to play fast and loose with power requirements. We'll see.