It may seem hard to fathom, but it has already been over a year since NVIDIA began shipping its GeForce RTX 30 series graphics cards based on Ampere. Supply shortages have dampened things a bit, but even so, technology marches on. And to that end, there is talk of NVIDIA refreshing its GeForce RTX series with Super SKUs early next year.
Regardless of the timing, it's a safe bet that it will happen at some point. NVIDIA's strategy these days is to bolster its lineup with "Ti" and "Super" variants. It's just anyone's guess when new cards will arrive, and that decision likely depends in large part on how the competition is faring. Which as it stands, boils down to AMD (Intel will assert itself into the discrete GPU discussion next year with Alchemist).
Here's how the desktop lineup currently shakes out, with regards to Ampere...
It's fairly fleshed out, though there is room to squeeze in lower end models like NVIDIA has done within its mobile line. Which, by the way, consists of the following...
Getting back to the rumor, Twitter user Greymon55 is confident that NVIDIA will inject Super models into its mobile lineup in early 2022. 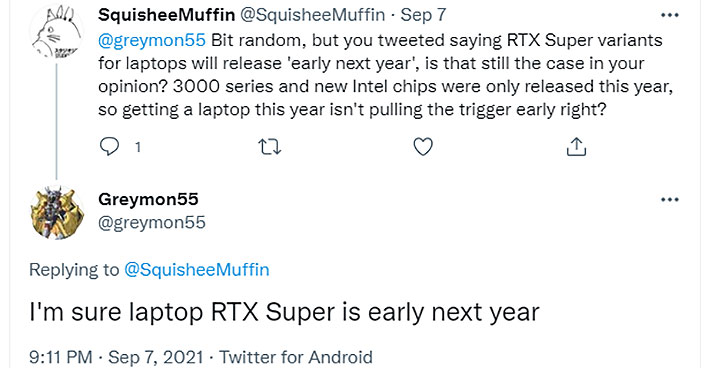 "I'm sure laptop RTX Super is early next year," they said, in response to a question about when they are coming.
If that is the case, it probably means a reveal on or around the Consumer Electronics Show (CES) in January, though we are just speculating. On a leak. So make of that what you will. It also remains to be seen if NVIDIA will launch Super variants within its desktop lineup early next year as well, or will initially focus just on its mobile offerings.
That could depend on what AMD has up its sleeve, and how competitive Intel's Alchemist ends up being. Intel CEO Pat Gelsinger has gone on record saying he anticipates the company "being in position to really put pressure on NVIDIA for the first time in forever." 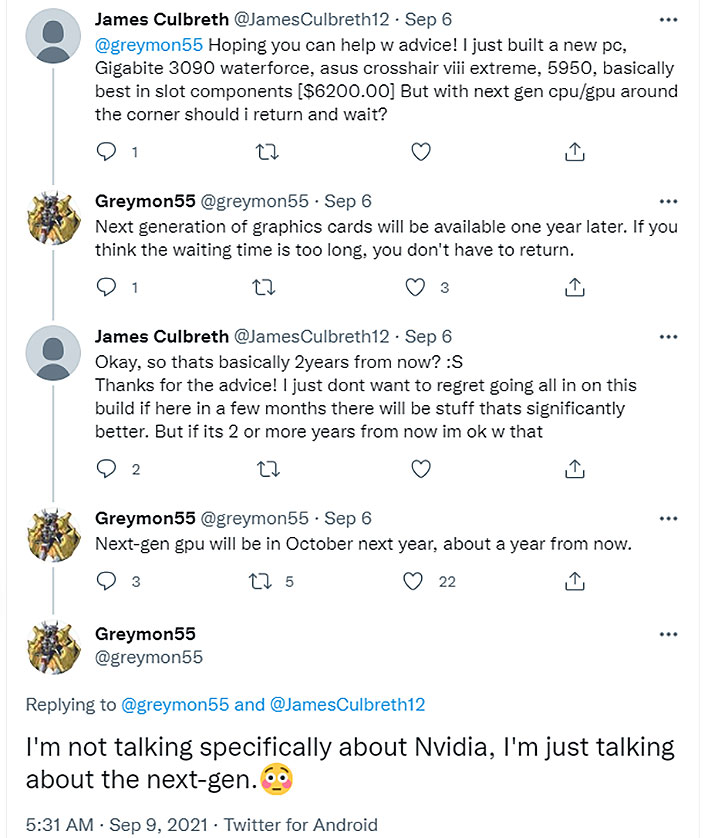 In a separate tweet, Greymon55 calibrates their crystal ball to look further into the future, noting that next-generation GPUs will be out in October 2022. For NVIDIA, that means Ada Lovelace, which is expected to power its GeForce RTX 40 series. But the leaker also clarified that the prediction is "not specifically about NVIDIA," so go ahead and include AMD and its RDNA 3 architecture in the discussion as well.
The sobering aspect of all this is that GPUs are incredibly hard to find in stock, unless you're willing to pay way above MSRP from a marketplace or second-hand seller. Hopefully things will ease up in the coming months, despite warnings from top chip makers saying the shortage could actually linger into 2023. Fingers crossed it won't.