Looked at the prices of DDR5 memory lately? The newer, faster, all-ECC system RAM is coming down in cost slowly, but it's nowhere near as cheap as ubiquitous DDR4 SDRAM. Plus, due to the latency advantages of hot-clocked DDR4 versus the less-expensive DDR5 modules on the market, DDR4 systems often end up faster in gaming and other client workloads which are more concerned about system memory latency than throughput.


Intel might be hoping that its partners would stick to DDR5 on motherboards for its forthcoming Raptor Lake 13th-gen CPUs, but that probably isn't going to happen. Not only is DDR5 still pretty expensive, but it offers little tangible benefit for users building gaming systems with discrete GPUs—likely a majority of the DIY market. 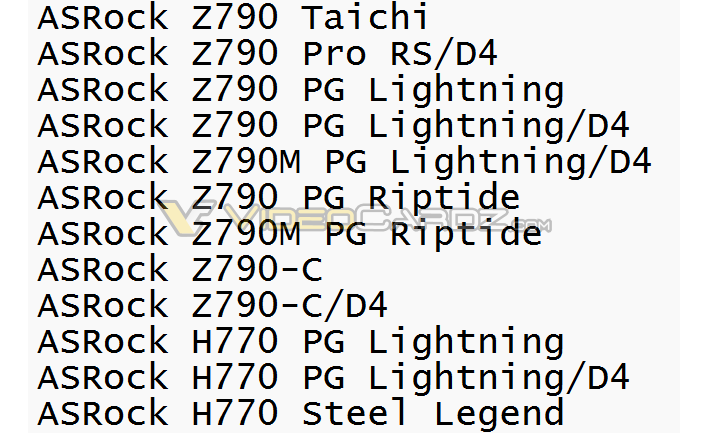 
As further evidence for this matter, we can take a look at the list of 700-series ASRock motherboards acquired by Videocardz. The list of pre-prelease products covers what looks like it will probably be ASRock's entire series of Z790 motherboards (at least at launch) as well as few H770 motherboards. Mixed in with the list of models are a number of platters suffixed with /D4, clearly indicating that they will take DDR4 memory.


Obviously this is just one vendor, and ASRock has never been one to shy away from doing things that Intel isn't too fond of. In the past, ASRock has shipped wacky motherboards like the P45TurboTwins2000 that supported both DDR2 and DDR3 memory for Core 2 processors. It's entirely possible that ASRock will be the only vendor shipping DDR4-compatible motherboards for Raptor Lake, but we wouldn't bet on it.
The names of the chipsets aren't a surprise if you've been paying attention to Intel's chipset naming for the last twelve generations, but even beyond that, we've already had a sort-of confirmation of Intel's Raptor Lake chipset names from Biostar's filing with the Eurasian Economic Union. Sure, Biostar recanted that listing—likely because it had to—but there's no real reason to doubt it.

However, the last few generations of Intel CPUs have launched with its high-end chipsets first, while the mid-range and lower-end chipsets have come later. Given that we've now heard about B760 and H770 along with Z790, it seems possible that Intel could launch its whole range of 700-series chipsets all at once. That's just conjecture, of course, so keep your eyes here for an official announcement.