Intel's current-generation 12th Gen Core-family processors employ DDR5 memory for optimal performance, at least in theory. In practice, a lot of folks building Alder Lake systems are sticking with DDR4 DIMMs instead of the newer standard, because DDR5 memory is in short supply and seriously scalped. Testing has shown that in most scenarios, outside of integrated graphics performance, fast DDR4 memory performs within a few percentage points of DDR5, and can even be faster than the stock 4800 MT/s DDR5 in select scenarios.

Well, according to a story from TechPowerUp, Intel is going to strongly encourage its partners to pair its 13th-Gen Core CPUs, code-named Raptor Lake, with DDR5 memory. Specifically, TPU says that Intel is "already asking motherboard makers to avoid using DDR4 in combination with the upcoming 700-series chipsets." 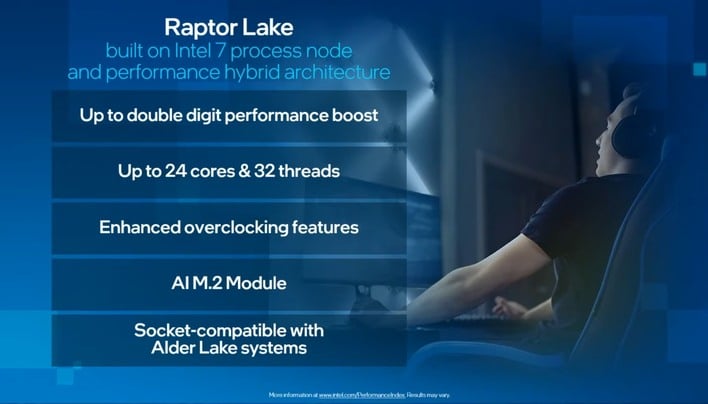 The reasoning behind this is fairly clear; Intel designed the chips with set performance characteristics in mind, and the relatively-reduced bandwidth of DDR4 memory probably constrains performance in enough scenarios (particularly graphics and gaming) that it fails to meet Intel's standards. Sure, it's possible to pick up the pace by hot-clocking your DRAM, but it's obviously not a great look for vendors to ask customers to overclock their products.

Of course, Raptor Lake's memory controller will almost certainly still support DDR4; after all, 13th-Gen CPUs are expected to slot into extant 600-series motherboards, and many of those have DDR4 slots onboard. It's simply that we might not see many 700-series motherboards—if any at all—with DDR4 slots onboard. If you want the latest platform, you'll have to spend out for pricey DDR5 memory. Hopefully the cost comes down soon. Though there are at last a couple of deals going on right now, actually, so that's encouraging at least.