AMD gambled that DDR5 memory prices and availability would be relatively stable by the time Zen 4 starts shipping, and it looks like that bet will pay off. After dropping in price by as much as 8 percent this quarter, DDR5 memory pricing is projected to fall even further next quarter, perhaps by as much as another 5 percent.
These price drops combined with more DDR5 memory kits infiltrating the market are creating a much different landscape than the one Intel faced when it released its 12th Gen Core Alder Lake processors last November. DDR5 was so scarce when Alder Lake arrive that scalpers did their thing, selling kits for up to $2,400 on eBay.
The advantage Intel had and still has with Alder Lake is that DDR5 memory is optional—depending on the motherboard, you can pair Alder Lake with DDR4 memory instead. That's not going to be the case with Zen 4. AMD has chosen to go all-in with DDR5 memory, and so it's imperative that the DRAM market is a favorable one.
That's the direction things are headed, even as DRAM players try to choke off supply to prevent further price reductions.
"In terms of PC DRAM, sustained weakening of demand has led to PC OEMs adjusting their annual shipment targets and also caused DRAM inventories to soar rapidly...since the overall DRAM industry remains oversupplied, even if PC demand is sluggish, suppliers still experienced difficulties in reducing their PC DRAM supply, resulting in a slight quarterly increase in the number of supplied bits. Therefore, PC DRAM pricing is forecast to drop by 3~8 percent," TrendForce states.
According to TrendForce, DDR4 memory pricing fell by up to 5 percent this quarter and DDR5 by up to 8 percent. Looking ahead to next quarter, the research firm expects DDR4 to decline by up to an additional 8 percent and DDR5 by up to 5 percent. So for Q2 and Q3, both DDR4 and DDR5 could fall by as much as 13 percent across the two periods. 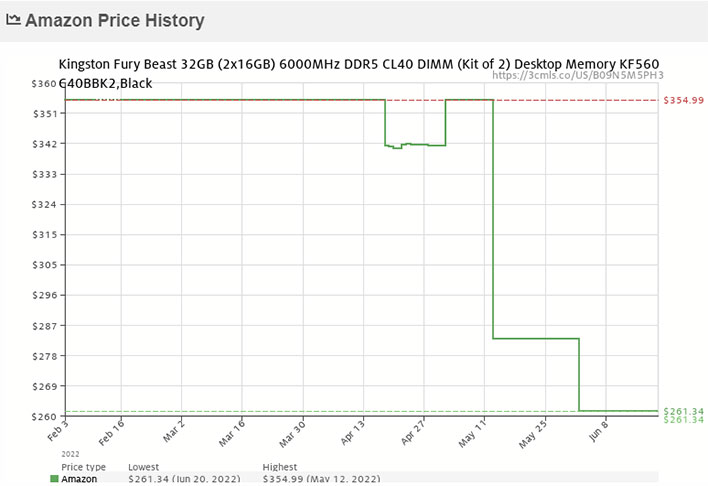 That's not insignificant, especially when factoring in the pricing premium that's attached to DDR5 memory modules. This also has the side benefit of making faster DDR5 solutions more reasonably priced. For example, price tracking shows that this 32GB G.Skill Trident Z5 RGB DDR5-6000 kit commanded around $540 by marketplace sellers for most of the year, but is now available $279.99. Likewise, Amazon was selling this 32GB Kingston Fury Beast DDR5-6000 memory kit for $354.99 for the past several months, and it now goes for $244.61.
It's not just higher speed kits that are dropping in price. This 32GB Kingston Fury Beast DDR5-4800 kit peaked at $283.99 on Amazon and is now listed for $189.52. These are all much bigger price drops than what even TrendForce is observing on the supplier side (up to 48 percent, in these examples).
Micron shared some insight into the initially high prices attached to DDR5 memory last year, saying it wasn't because of the memory chips but to due to challenges with sourcing non-memory components. We week that to mean power management ICs (PMICs), voltage regulating modules (VRMs), and possibly even printed circuit boards (PCBs).
Whatever the case, Micron also said the shortage of non-memory components would "moderate through 2022, enabling bit shipments of DDR5 to grow to meaningful levels in the the second half of calendar 2022." It looks like Micron was right on the money.