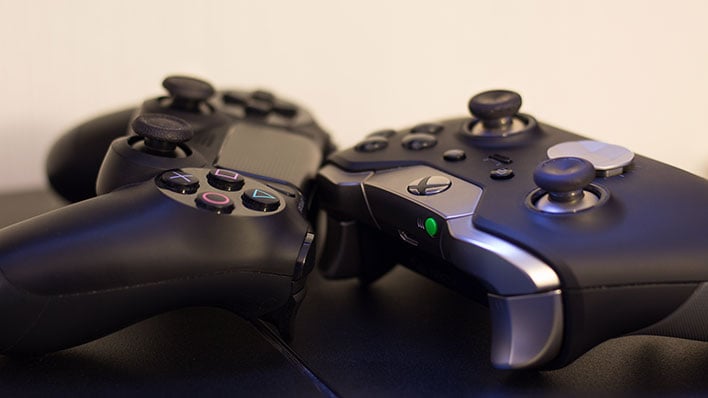 Sony and Microsoft are both planning to launch next generation game consoles toward the end of the year, those being the PlayStation 5 (PS5) and Xbox Series X, respectively. Both will feature custom AMD silicon underneath the hood, along with solid state drive (SSD) storage, and with there being so many similarities in the hardware makeup of each console, will one be faster than the other? And if so, which one? If a recent tweet is any indication, the edge will go to the PS5. Maybe.

Here's the thing—AMD's Zen 2 CPU architecture and next-generation Navi GPU (with hardware-level support for real-time ray tracing) will power both consoles. That is pretty much the extent of what we know for sure, with just about everything else being rooted in leaks, rumors, and speculation. Perhaps we will know more next month if Sony hosts a PS5 reveal in February, as rumored.
In the meantime, the folks at PSU spotted an interesting tweet by Tidux, who apparently is a "well known accurate industry leaker." The name is new to me, but here's the tweet in question...

This is what info i have gathered over the last few weeks. Final dev kits for PS5 are out.

Tidux is vague about how exactly he reached his conclusions, though he did note that final PS5 devkits are out in the wild.
According to his breakdown, neither console has an edge in CPU performance. Interestingly, he gives the overall performance edge to the PS5 even though the GPU in the Xbox Series X will be more powerful. However, he claims the difference in GPU performance is less than 1-teraflop. Meanwhile, Tidux points to the PS5 has have more RAM, faster RAM, a higher capacity SSD, and a faster SSD.
All of what Tidux posted is possible, there is no doubt about that. But is it plausible? Color me skeptical. Granted, final devkits might be in the wild, but it's still way too early to make definitive performance comparisons. Whatever ends up shipping to consumers at the end of the year could differ from the devkits, in terms of specific hardware.
Incidentally, Richard Leadbetter at Eurogamer recently posted an article claiming the Xbox Series X will feature a Navi GPU capable of 12 TFLOPs, versus 9.2 TFLOPs for the PS5. He bases the claim on a leaked 3DMark entry for a GPU that could find its way into the PS5, along with "overwhelming evidence" from wherever he verified the source.
What does it all mean? Simply put, it means we will have to wait and see. Rumors and leaks point in all directions right now, so don't go betting the farm on one over the other.