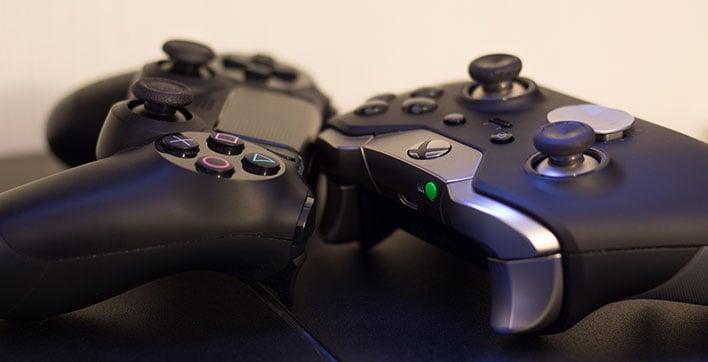 Microsoft and Sony and are both planning to launch next-generation game consoles near the end of 2020, the Xbox Series X and PlayStation 5, respectively. While full details of each one is under tight lock and key, we know both will feature custom AMD silicon, consisting of Zen 2 CPU cores and a powerful Navi GPU, paired with a solid state drive. But which one will be the faster console? Some new information suggests the Xbox One X could have the edge, at least on paper.
All we really know for sure is that the Navi GPU inside each console will bring hardware-level support for real-time ray tracing. Beyond that, there is no official information outlining the number of compute units or stream processors, clockspeeds, or anything else on a technical level. But there have been some interesting leaks.
Richard Leadbetter, technology editor for Digital Foundry, broke them down in an article at Eurogamer. Leadbetter points to a previous 3DMark leak that showcased an AMD GPU codenamed "Gonzalo," which is thought to be the chip that will find its way into the PS5. There has been some skepticism about its legitimacy, but according to Leadbetter, after having verified the source, there is "overwhelming evidence" to suggest the data did actually come from AMD.
As the story goes, someone at AMD's ASIC validation team stored bits of internal testing data on GitHub. These data fragments are said to represent various designs that are a work in progress, including the PS5 chip, which is now codenamed "Oberon."
The leaked data is several months old, and things could have changed since then—specs, features, drivers, and so forth. That said, more recently leaked tests "confirm" the Navi GPU inside the PS5 will have 36 custom GCN CUs running at 2GHz, which translates into 9.2 teraflops (TFLOPs) of raw performance.
New information also suggests the PS5 will sport GDDR6 memory, which is not surprising, with a rated bandwidth of 448GB/s (or even higher if going with 16Gbps chips on a 256-bit memory bus, instead of 14Gbps chips).
What about the Xbox Series X? Microsoft's Phil Spencer made some interesting comments last month, telling The Verge the next-gen console "will not be out of position on power or price." He as essentially saying the Xbox Series X will be technologically superior to the PS5, in terms of specs.
That may be the case, when looking at the GPU. Microsoft has gone on record saying the GPU will be eight times more powerful than the Xbox One, and twice as powerful as the Xbox One X. If we assume that transistor density has doubled in going from custom 16nm to 7nm silicon, part of the performance gains will come from higher GPU frequencies. If this comes to pass, we would be looking at a custom Navi GPU with 12 TFLOPs of performance.
According to Leadbetter, the aforementioned leak mentions a processor named "Arden," which is likely the GPU inside the Xbox Series X. It points to Arden having 3,584 shaders, which works out to 56 CUs. If 12 TFLOPs is accurate, then a clockspeed of 1,680MHz would be needed to achieve that, given the rest of the specs (1,700MHz would bump that up to 12.2 TFLOPs).
There's much more to read on topic, which you can do by hitting the link in the Via field below. Just bear in mind that none of this is official. Furthermore, specs and designs could change, with launches of both consoles being a year away.