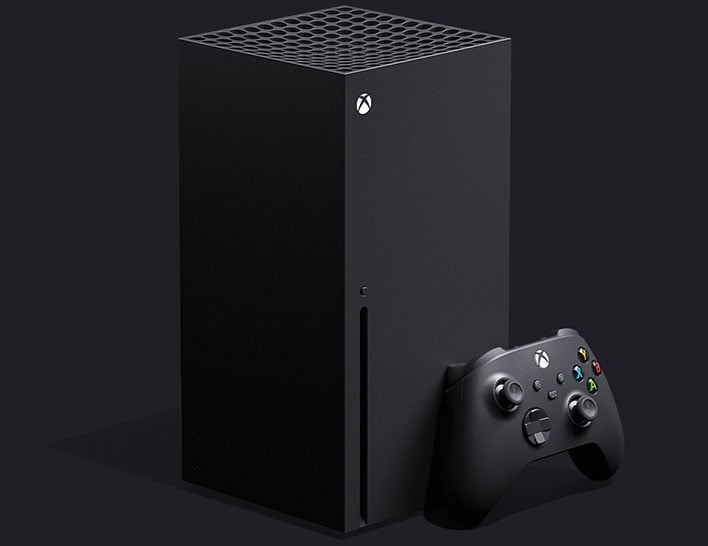 Microsoft and Sony are both already hyping up their next-generation game consoles, the Xbox Series X (previously known as Project Scarlett) and PlayStation 5, respectively. More recently, Microsoft uploaded a preview video showcasing the Xbox Series X's design (it looks like a small PC tower). Microsoft's also talked a bit about the hardware inside, though for the time being, it is leaving the detective work up to the gaming community at large.
That is not unexpected—the Xbox Series X's launch is still a year away, as it will arrive in holiday 2020. In the meantime, Microsoft is dropping small pieces of the hardware puzzle, and is tasking curious folks to fill in the blanks until official details are revealed. On a high level, we already know the Xbox Series X will wield a custom AMD processor based on the company's Zen 2 CPU architecture, a custom Navi GPU with hardware-based support for real-time ray tracing, and a fast NVMe solid state drive. But can we figure out anything else?
Perhaps we can, based on some of Microsoft's power claims. For example, Microsoft has gone on record saying the Xbox Series X will have a GPU that is eight times more powerful than the Xbox One, and twice as powerful as the Xbox One X.
Richard Leadbetter at Eurogamer ran with that statement (and others made by Microsoft) to sort of guesstimate the kind of power we're looking at here. Assuming that the transistor density has probably doubled in going from custom 16nm silicon to 7nm silicon, part of the performance gains will likely come from higher GPU frequencies.

Looking at just raw teraflops (TFLOPs), the Xbox Series X will be around a 12 TFLOPs system, based on Microsoft's performance-doubling comments (compared to the Xbox One X). Part of that will come from architectural improvements introduced by Navi, in addition to faster clocks. According to Leadbetter, that suggests a 9-10 TFLOP Navi GPU combined with further architectural tweaks would get Microsoft to the place it says the Xbox Series X will be at, compared to the Xbox One X.
More clues can be found in what Microsoft showed off at E3. Based on the image of the processor, the size of the case, and an assumption that the GPU would race along at around 2GHz, we'd be looking at 48 compute units to hit the stated performance claim. That's a 20 percent bump over the Radeon RX 5700 XT, and would qualify it as the most powerful Navi GPU to date.
It's very likely this is why Microsoft went with a tower design. The Xbox Series X continues the console's march into PC territory, and all the power it is presumably comes with will require good airflow and capable cooling. It's quite possible the console as a whole tops 300W when all is said and done.

As to the storage scheme, Microsoft's Phil Spencer said the Xbox One X will deliver a 40x improvement in I/O speed. That translates into 1.6GB/s (sequential reads) or 2.4GB/s, depending on which generation of the Xbox One he is comparing to. Either way, today's PCIe 3.0 NVMe SSDs would be sufficient to meet that performance claim.
There's much more to digest. When you have a moment, we recommend hitting the link in the Via field below to read Leadbetter's full analysis.