Marvel's Guardians of the Galaxy is out now on game consoles and PC, and if you aim to play on the latter with a GeForce graphic card, note that NVIDIA has a 'Game Ready' driver update on tap. NVIDIA's latest GPU driver—version 496.49 WHQL—is prepped and primed for Square Enix's just-released game, as well as a handful of other titles. It also squashes a few bugs, one of which will make owners of LG's C1-series OLED TVs happy as a clam (assuming clams are actually happy).

One advantage PC players have over their console brethren is they can play Guardians of the Galaxy at up to an 8K resolution in HDR. Theoretically, anyway—you'll need a monster PC to support 8K gaming. However, PC players also have access to unlocked frame rates, and flip the RTX switch on compatible hardware for real-time ray tracing and Deep Learning Super Sampling (DLSS) benefits.

"With a suitable system, glass accurately reflects characters and surroundings, creating a more immersive visual experience. Water has more accurate and detailed reflections. And the many metallic surfaces of the game’s alien environments reflect their surroundings and the action, greatly improving image quality throughout the game," NVIDIA says.
NVIDIA also shared recommended specs, for both playing with RTX on and off at different resolutions. Here's a look... 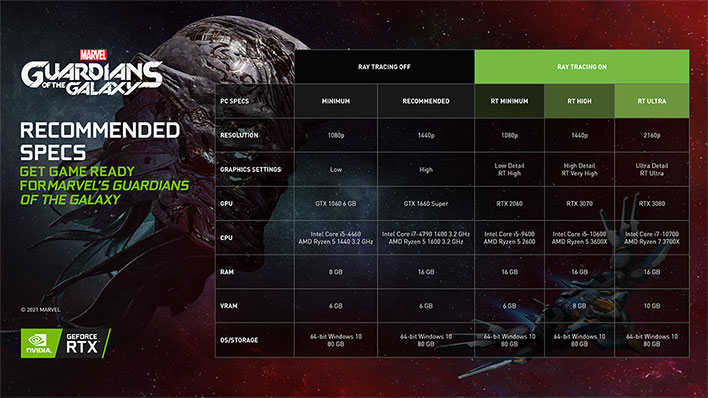 At 1080p and with RTX turned on, NVIDIA says you'll be fine with a GeForce RTX 2060. A GeForce RTX 3070 is recommended if playing at 1440, and a GeForce RTX 3080 for playing at 4K, both also with RTX turned on. Otherwise, you can get by with a previous generation GeForce GTX 1060 (1080p) or GeForce GTX 1660 Super (1440p), according to NVIDIA.
In addition to being optimized for Guardian's of the Galaxy, NVIDIA's latest driver update also purportedly delivers the best performance in Age of Empires IV, Battlefield 2042 (Early Access), Call of Duty: Vanguard, Chivalry 2, Doom Eternal, Forza Horizon 5, Grand Theft Auto: The Trilogy - The Definitive Edition, Jurassic World Evolution 2, Riders Republic, and The Elder Scrolls Online.
That's a longer list than we're used to see with NVIDIA's driver updates, which typically focus on 1-3 titles. 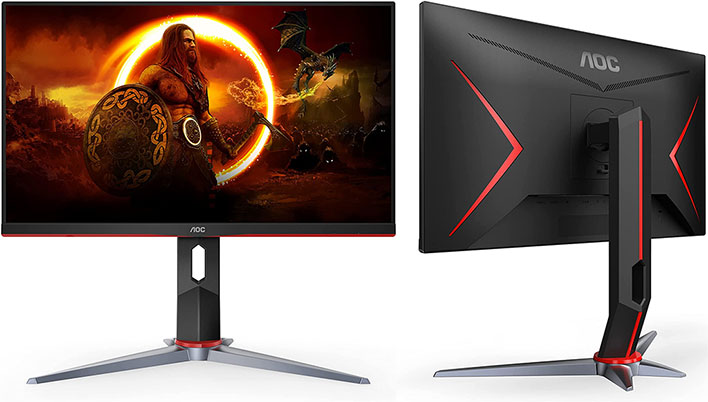 Outside of specific game optimizations, applying the 496.49 driver update adds support for more half a dozen more G-Sync Compatible monitors. These are displays that lack a dedicated G-Sync hardware module, but still work just fine with G-Sync to keep the action on the screen synced up to the graphics card, to prevent screen tearing.
They include AOC's 24G2W1G4 and AG274QS3R1B+, ASUS's VG32AQ1LA and XG249CM, and MSI's MPG321QRF-QD.
Finally, the latest driver package fixes the following issues...
That last one is perhaps the biggest one, as LG's OLED TVs have become popular big screen options for gamers. LG has been focused on gaming performance with its OLED TV models, which boast HDMI 2.1 connectivity and the features that are inherent to the standard (like VRR support).
You can update your GPU driver through GeForce Experience, or head to NVIDIA's driver download page to grab and install it manually.