It is a bit early to be doing spring cleaning, but you might as well take that crusty 'old' 4K television of yours and put it by the road, or dumpster. Yes, the 75-incher you just bought—it is obsolete, yesterday's news, a relic! Okay, not really (and don't actually get rid of it!). However, TV makers have already begun hitching their roadmaps to the 8K hype train, with Sharp the latest to introduce one (another one, actually), it being an absolutely mammoth 120-inch model.
Not for the faint of wallet I'm sure, this would make a great addition to your living room PC, which you will soon be equipping with a GeForce RTX 3090, right? During the GeForce RTX 30 series reveal, NVIDIA showed a video of creators who were invited to the company's headquarters to play some 8K gaming on a  GeForce RTX 3090, and yes, it was pretty neat.
The era of 8K gaming is not upon us, though, especially with ray tracing digging its boots into the ground and demanding more from our GPU hardware. So again, don't toss that fancy new 4K television of yours on Craigslist or eBay just yet. 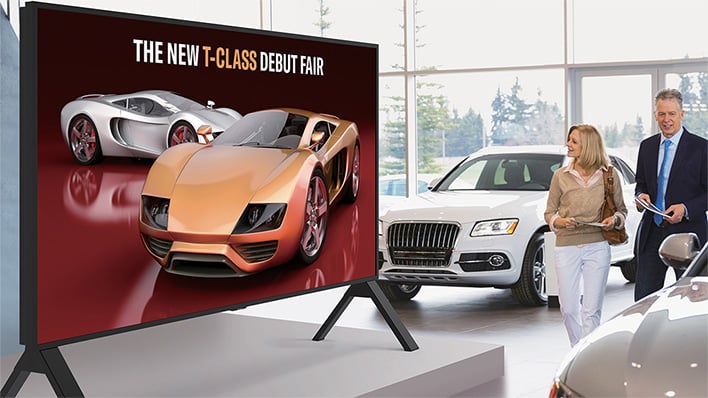 All that aside, Sharp's new 8M-B120C display is certainly drool-worthy. It is big, obviously, at 120 inches and packs a ton of pixels with an 8K resolution (7680x4320). And it also supports HDMI 2.1, which allows it to output 8K content at 60 frames per second, or 4K resolution video at 120 frame per second, and it runs at up to 120Hz.
If wanting to find a reason to ding this set, you can point to the LCD screen instead of OLED. I don't even want to imagine what a 120-inch OLED could cost, though, as this thing is going to be expensive enough as it is.
Other features and specs include a 3,500:1 contrast ratio, 6ms response time (gray-to-gray), and a 600 nits typical brightness rating (it gets brighter for HDR content, though Sharp does not mention the peak rating). It also features a direct LED lighting with 2,048 LEDs.
Before someone pounces on the nomenclature, this is technically not a television. It does not have a built-in tuner, and is primarily intended for business environments. But it could still be used as one, with a set-top box and/or streaming stick. It is also capable of upconverting content to 8K, just like Sharp's Aquos 8K TV line.
Sharp will start taking orders for this display later this month, with units being built to order. Feel free to inquire with Sharp if you have deep pockets and an empty space in your living room that's begging for a 120-inch 8K display.