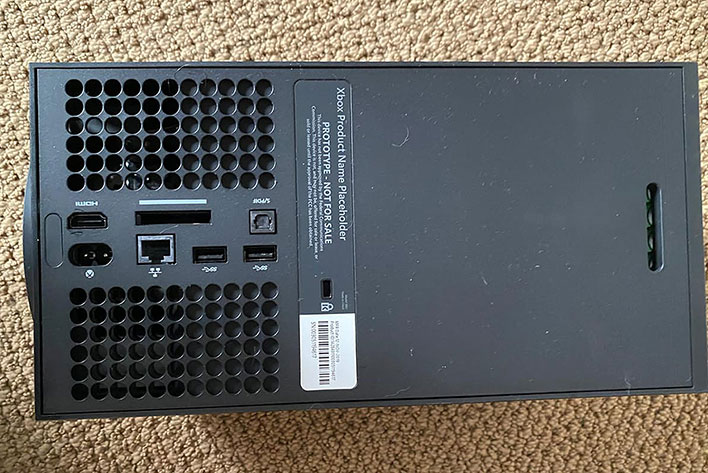 We still have around 10 months longer to wait until Microsoft launches its next-generation Xbox Series X to retail. Be that as it may, it's difficult to keep anything a secret from the internet, and if some newly leaked photos are any indication of the Xbox Series X's final design, then we know what the port selection will look like.
This has been a point of intrigue, in light of rendered images of the upcoming console seemingly revealing the rear ports when lighting the image. However, Microsoft was quick to correct the speculation, saying it purchased a the renders from TurboSquid and they were not an accurate representation of the shipping console.
That all occurred during CES 2020. Fast forward a couple of weeks and some new images are making the rounds. Over at the Neogaf forums, user CurryPanda posted a couple of actual photos (read: not renders) of what is claimed to be a prototype build of the Xbox Series X resting rather plainly on the carpet.

Out of two images, it's the shot of the rear port arrangement that is more interesting. It shows a pair of USB Type-A ports, an RJ45 Ethernet connector, a single HDMI output, an optical audio port, and a mysterious rectangular slot. According to Thurrott, the latter is a port for diagnostic testing, which is not likely to be included on the final hardware.

Cooling vents flank the rear ports on both sides, all of which sit toward the bottom of the tower. Whether any of this sticks around for the final build, however, is not known. Even if these images are of an actual prototype, as they appear to be, Microsoft could end up changing the design a little or even a lot for the retail model. In this case, the placard on the back doesn't even identify the console as an Xbox Series X, and instead reads, "Xbox Product Name Placeholder." So, this could be an early prototype. Or not—there's just no way of knowing.

Microsoft and Sony have both been teasing details of each one's next-generation game console, the Xbox Series X and PlayStation 5, respectively. These have mostly been high-level details. For example, we know both consoles will feature custom AMD silicon based on the company's Zen 2 CPU and Navi GPU architectures. They will also support real-time ray tracing on the hardware level, and sport solid state drive (SSD) storage for faster game loads and snappier performance.
The Xbox Series X and PS5 are both slated to ship in holiday 2020.