It seems a little funny to already be talking about Raptor Lake when Alder Lake has only just arrived to retail. But that's how the beat of the technology drum goes. So what do we know about Raptor Lake? It's expected to be a less dramatic architectural upgrade next round, and will in all likelihood even retain support for DDR4 memory, just like Alder Lake.
Alder Lake, as you're probably aware, supports both DDR4 and DDR5 memory. We have not yet taken an in-depth look at the performance comparison between the two memory types, but a glance around the web suggests that opting for DDR5 offers only a negligible advantage in certain applications (like gaming), while having a more substantial impact in certain memory intensive workloads.
The bigger issues at the moment are pricing and availability. There are not many DDR5 memory kits available at retail, and the few that are up for purchase are almost all 32GB kits. In the early going, DDR5 memory is also around twice as expensive as DDR4.

By the time Raptor Lake comes into view, it should be a different situation—we expect there to be a whole lot more kits to choose from, at better price points and faster speeds to boot. Even so, rumor has it Intel's 13th Gen Core processors will support DDR4 as well. 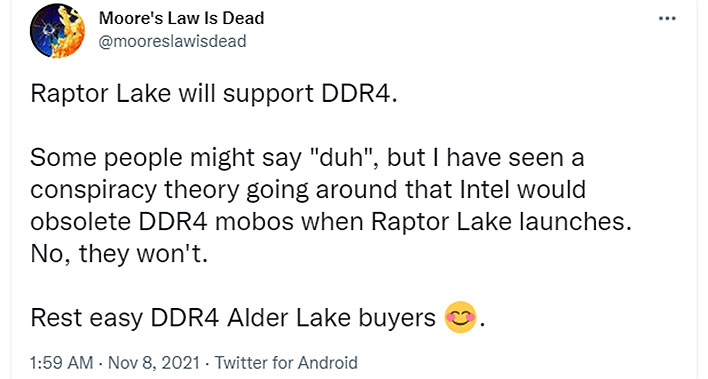 That's according to leaker Moore's Law Is Dead, who wanted to address a "conspiracy theory going around that Intel would obsolete DDR4 mobos when Raptor Lake launches. No, they won't," he says.
Maintaining DDR4 compatibility for another round feels like a foregone conclusion, for a few reasons. For one, it will take some time for DDR5 to supplant DDR4 in the marketplace in any kind of meaningful way. As in, probably a couple or few years. Secondly, from a sales perspective, it makes sense to retain DDR4 compatibility for at least another round. And lastly, Raptor Lake is expected to be drop-in compatible with current Z690 motherboards and the rest of the 600-series stack that is coming (H670, B660, and H610).
Intel could choose to only bake in support for DDR5 memory, rendering Raptor Lake incompatible with 600-series motherboards that use DDR4 RAM. But that seems an unlikely scenario.
We only have past leaks and rumors to go by, but if they prove correct, Raptor Lake will again pair performant Golden Cove "P-cores" with efficient Gracemont "E-cores" in the same hybrid package. However, it's said Intel will inject twice as many E-cores into Raptor Lake (16 total), and bolster the P-cores with faster clocks and a larger bucket of L2 cache, for what amounts to an IPC gain. None of those upgrades would necessitate ditching DDR4 memory.
This puts Intel in a sort of peculiar position. On the one hand, it's pushing the benefits of the latest technologies embraced by Alder Lake, including DDR5 and PCIe 5.0. But on the other, it might create more sales if it comes out and says, 'You bet, Raptor Lake will support DDR4 too, so go ahead with that new build!'. But barring official confirmation, it still amounts to taking a leap of faith that building a PC around Alder Lake and with DDR4 memory today will yield a drop-in upgrade path to Raptor Lake tomorrow.