This past March, Intel gave us some insight into its upcoming 12th generation Alder Lake and 13th generation Raptor Lake processor platforms. Technical documents on Intel's website provided an "overview of high-level compatibility guidance between Alder Lake S and Raptor Lake S" for its customers.

This weekend, further documentation was discovered, which details Intel's "Alder-Raptor Lake PCH-S SATA Controller." Given the naming, there's no question that Alder Lake and Raptor Lake feature a related CPU architecture that will share supporting chipsets. The documentation was submitted to the SATA-IO, which is responsible for the SATA specification that hardware vendors adopt on motherboards and complementing accessories. 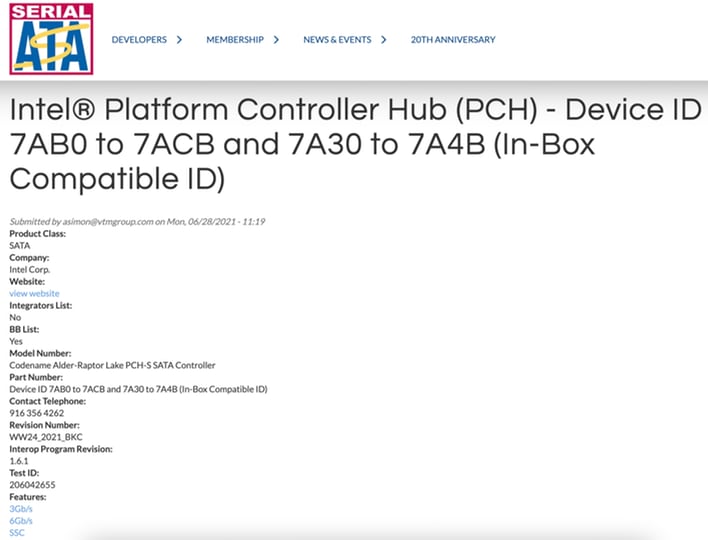 At present, four Device IDs were listed in the filing: 7AB0, 7ACB, 7A30, and 7A4B. Unfortunately, not much else is revealed except support for 3GB/sec and 6GB/sec SATA connections.

Alder Lake is Intel's second hybrid processor architecture, following its 10th generation Lakefield processors, which have already been discontinued [PDF]. Alder Lake will reportedly use a cluster of high-performance Golden Cove cores used in conjunction with Gracemont efficiency cores. The latest information suggests that flagship Alder Lake processors will feature 8 Golden Cove cores and 8 Gracement cores. However, only the Golden Cove cores will have HyperThreading enabled, meaning a maximum of 24 threads per processor.

If the rumors are accurate, 13th generation Raptor Lake processors will push the maximum core count to 24 (8 performance cores, 16 efficiency cores, 32 threads in total). Both processor families will use the LGA-1700 socket.

Alder Lake will become the first consumer desktop platform to support the PCIe 5.0 interface and DDR5 memory. Although Alder Lake has yet to launch officially, some vendors are already selling DDR5-4800 memory in 32GB kits on Amazon.

Given Intel's progression with its chipsets, Alder Lake should bring 600 Series motherboards to fruition, which would be compatible with the follow-up Raptor Lake. On the other hand, Raptor Lake will likely usher in the 700 Series chipsets with tweaks specific to that processor (although Alder Lake processors should work just fine).