Alder Lake is not even out yet (soon, though), but that has not stopped the leak train from cruising down the tracks towards what comes after. We are of course talking about Intel's eventual 13th Gen Core processors, otherwise known as Raptor Lake. To that end, some interesting information about Raptor Lake's power limits have supposedly come to light.
Little by little, we seem to learning more about Raptor Lake, through a series of leaks. It slid into view earlier this year on what was claimed to be a processor roadmap, which pegged it for a 2022 release. Then more recently, Intel acknowledged Raptor Lake in a set of official documents, though it did not provide any real details about the chips.
Fitting the pieces together is like assembling a puzzle at this early stage. So, what do we know, or think we know? It's said Raptor Lake is closely aligned with Alder Lake, in that it will also feature a hybrid architecture, pairing high performance cores with power efficient cores in the same package.
Intel has also seemingly confirmed that its upcoming 600-series chipset for Alder Lake will also support Raptor Lake. The revelation came by way of official Intel documentation submitted to the SATA-IO, which is responsible for the SATA specification that hardware vendors adopt on motherboards and complementing accessories.

Earlier this month, someone leaked out a chart outlining Intel's power requirements for its Alder Lake-S desktop processors, highlighting the 12V2 rail that powers the CPU. And if the chart is accurate, Alder Lake will peak higher than Rocket Lake and Comet Lake. Here's a look...
We don't have direct comparison values for Raptor Lake. However, this data prompted Igor Wallossek from Igor's Lab to reach out to his sources for more information, and he was able to obtain some detailed Rapor Lake charts outlining Power Level L1, Power Level L2, and Power Level L4 values.
What are these? The PL1 value is the Thermal Design Power (TDP) rating you typically see associated with a CPU. it is a sort of long-term value for a processor's power consumption. PL2 is a short-term value when turbo mode temporarily bumps up the frequency. And PL4 is a power limit for very short peaks, lasting no more than 10ms. 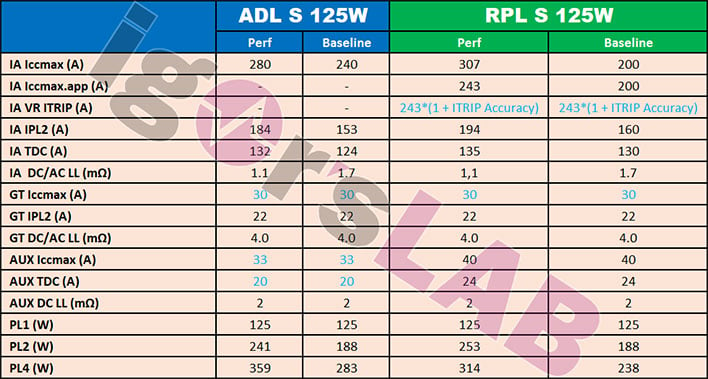 The first of Wallossek's charts highlights power limits on Raptor Lake processors that fall into the performance category, those being the 125W TDP models. Looking at the numbers, the PL1 (or rated TDP) remains the same for Raptor Lake and Alder Lake. The PL2 and PL4 ratings differ. For Raptor Lake, the PL2 value increases from 241W to 253W, though only for the Performance segment (Baseline is unchanged). Meanwhile, PL4 value drops from 359W to 314W.
These power limits kind of bounce around, which is interesting—that makes it difficult to parse what it all means in terms of clock speed and performance, relative to Alder Lake. We should also note that even if these values are currently accurate, they could change by the time Intel finalizes the design. 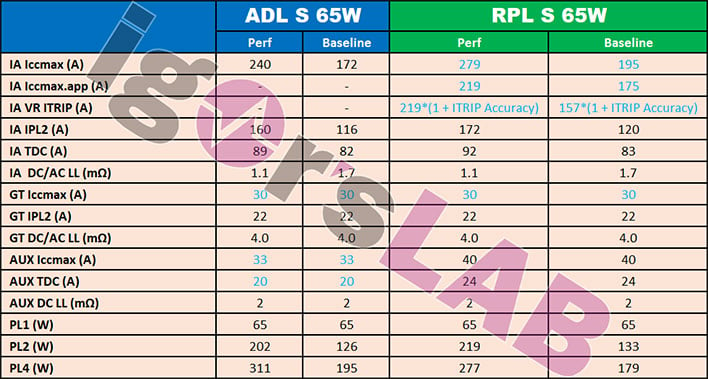 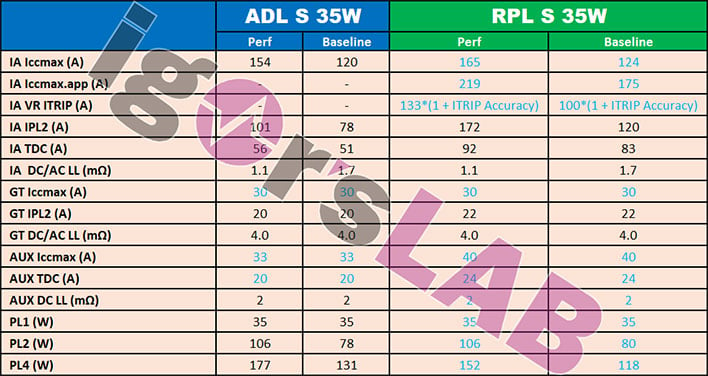 Wallossek also posted charts for lower power Raptor Lake designs in the 65W and 35W categories. In the 65W lineup, we again see the PL2 value rise a little, while the PL4 value drops from 311W to a more conservative 277W. This could suggest better power efficiency, as we would expect going from one generation to the next.
A similar story unfolds in the 35W tier, at least for the PL4 ratings—we see another reduction, this time from 177W to 152W.
We'll have to wait and see how it all plays out and what this information translates to, in terms of real-world metrics. But it appears that Raptor Lake is shaping up to be more power efficient than Alder Lake in performance workloads, and by a significant margin in some cases.