Some more details came to light about Alder Lake during the Intel Architecture Day 21 event, including a bit of a deeper dive into the hybrid architecture with three high-speed interconnect fabrics to tie together I/O, memory, and compute. What Intel unsurprisingly did not discuss is Alder Lake's successor, Raptor Lake, but a fresh leak offered up some supposed details, including a breakdown of the different CPUs that will be offered.
Logic and past leaks dictate that Raptor Lake will build upon the heterogeneous foundation put in place with Alder Lake, which entails combining high performance (or 'big') processor cores with more power efficient (or 'small') cores in the same package. The basic idea is, there's horsepower on tap when you need it, and power efficiency when added muscle is not required.
From what Intel recently disclosed about Alder Lake, it will be offered with up to 16 total cores (eight big Golden Cove cores and eight small Gracemont cores) and 24 threads (two threads per each big core, and one thread per each small core), and up to 30MB of non-inclusive L3 cache. It will also support both DDR5 and DDR4 memory, as well as the PCI Express Gen 5 specification. Good stuff.
What about Raptor Lake? Notable leaker AdoredTV posted a video highlighting unofficial details about Raptor Lake, saying it was taped-in this past June, meaning the design is close to be finalized, at which point it would be ready for tape-out.

He also said Raptor Lake will continue to leverage Gracemont cores, but that Intel is doubling the number from eight to 16 power efficient cores. As for the burlier Golden Cove cores, he says they are being beefed up with improved power and performance, due to a mix of IPC (instructions per clock) gains, faster clock speeds, and a larger L2 cache allotment.
How much faster is he talking about? Word is, Intel is aiming for a 200MHz bump in the max Turbo frequency, which would bump things up to record 5.5GHz (for stock settings), paving the way for "undisputed single-threaded performance leadership," which are supposedly Intel's own words. However, he also notes that the 5.5GHz figure was quoted from Intel a year ago, so it could very well change.
Some other notable leaked details...
Enthusiast SKUs will have a 125W TDP, mainstream SKUs will check in a 65W, and low power variants will have a 35W TDP, according to the leak. And of course Intel will offer Core i9, Core i7, Core i5, and Core i3 models, as well Pentium chips.
Here's how it breaks down... 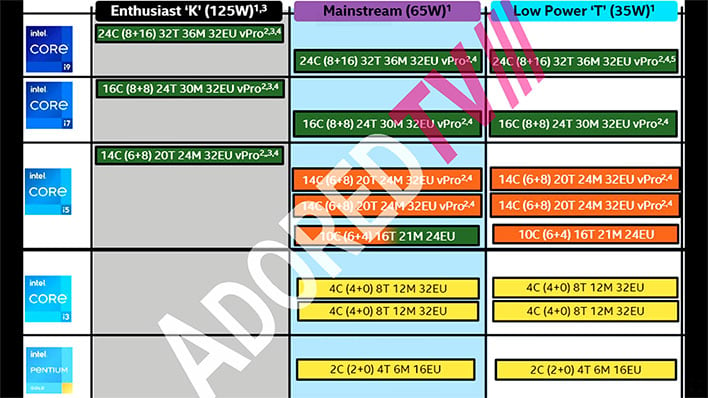 There's no actual mention of the SKUs that would be associated with all these configurations, but based on Intel's naming history and past leaks on the matter, we're looking at a Core i9-13900K at the top, with eight Golden Cove cores, 16 Gracemont Cores, and 24 threads, along with 36MB of L3 cache and a 125W TDP. It will also feature onboard Xe graphics with 32 execution units, if the leak is accurate.
Here's a general breakdown...
It's a varied mix, just as we would expect. Whether Intel can hit on its performance targets and other goals remains to be seen, and could depend in part on things turn out with Alder Lake. Fortunately we will begin to see how the heterogeneous approach in the x86 desktop space works out very soon, with Alder Lake's launch being right around the corner. Then the wait is on for Raptor Lake, and after that, Meteor Lake.
Meanwhile, AMD is not standing pat, of course. It has Zen 4 in the wings, which will debut sometime next year. Zen 4 will also feature a new socket and support for DDR5 memory, though rumor has it only the data center products (EPYC) will support PCIe 5.0, at least until Zen 5 arrives. In any event, 2022 is shaping up to an be interesting year.