Pixel 4a Gains FCC Certification But Has Google's Moment Passed?

At this point, we've almost given up hope on the Pixel 4a. It's been over a year since Google launched the very well-received Pixel 3a and Pixel 3a XL mid-range smartphones, and the successor is nowhere to be found. That's not to say that we haven't seen leaked images, specs, and even retail box shots for the Pixel 4a, but what's taking Google so long to actually release the phone?

Well, we now know that the Pixel 4a has gained its FCC certification, as three FCC IDs passed through the regulatory agency's testing labs. Those model numbers included the G025J, G025M, and G025N; with the first reportedly being reserved for U.S. devices. Making an appearance at the FCC is usually one of the very last stops before a new device is released in the U.S., so hopefully that means that the Pixel 4a will launch very soon.

Thanks to plentiful leaks over the past few months, it's expected that the Pixel 4a will be powered by a legacy Snapdragon 730 SoC with 6GB of RAM, and will feature a 5.81-inch OLED display (2340x1080). Despite a relatively large square camera pod on the back -- like the higher-end Pixel 4 and Pixel 4 XL -- the Pixel 4a only has a single 12.2MP rear camera. Other known features including a 3,080 mAh battery, rear-mounted optical fingerprint sensor and a hole-punch cutout for the selfie camera. The Pixel 4a was set to debut alongside a larger Pixel 4a XL, but the latter device has allegedly been cancelled. 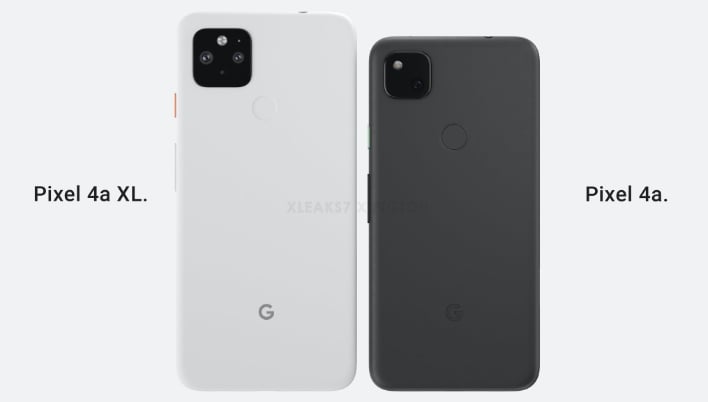 With that being said, many seem to think that Google may have already missed its chance to make a splash in the mid-range market with the Pixel 4a. Apple has already made a huge impression at the $399 price point with its second-generation iPhone SE that has an A13 Bionic SoC that will outpace most (if not all) Android flagship processors costing more than twice the price.

The Samsung Galaxy A51 is also a credible threat, and has an MSRP of $399. Right now, Amazon is selling the smartphone for $325, although the retailer has offered it for as low as $269 in recent weeks. Although the Galaxy A51 won't come anywhere close to touching he iPhone SE with respect to performance, it does offer a big battery, a large 6.5-inch OLED display, and four cameras on the back (which is probably enough to persuade a lot of customers).

And we can't forget the upcoming OnePlus Z, which is confirmed to be coming next month. Rumors have suggested that the smartphone could be priced as low as $299, even with 5G connectivity onboard. That's an unheard-of price for a 5G smartphone in the U.S., so we'll just have to wait and see how things transpire during next month's announcement.

As for the Pixel 4a, Google is rumored to price the device at $349 when it launches. That would put it at $50 below the MSRP of the iPhone SE and Galaxy A51, but will that be enough to persuade buyers to give Google another chance in the mid-range market?

Tags:  Google, FCC, (nasdaq:goog), pixel 4a
Show comments blog comments powered by Disqus
Follow Us:
What Are You Playing Now?