CD Projekt Red's latest mega-blockbuster game, Cyberpunk 2077, launched this week on PC, Xbox One, and PlayStation 4. The developer announced its oft-delayed RPG way back in 2012, but anticipation has been running particularly hot for the several months now. We got our hands on the game right as the gates opened at midnight GMT on the today, but that's not enough time to work up a full review with all of our usual performance figures. So today we'll take a quick look at how the game runs and how its game world feels, on a narrow scope, but our full deep dive review will be coming soon.

Unfortunately, Cyberpunk's launch hasn't been without its trials. On the PC, DirectX ray tracing effects are exclusive to NVIDIA hardware, so you'll need a GeForce RTX 30 or 20 series graphics card to enjoy that higher level of visual fidelity. However, for those who don't mind foregoing DXR, the rest of CD Projekt Red's updated system requirements look easy enough to meet. We'll certainly also investigate performance without ray tracing effects enabled, both with and without NVIDIA's Deep Learning Super Sampling (DLSS 2.0) anti-aliasing scheme, which is baked into the game. 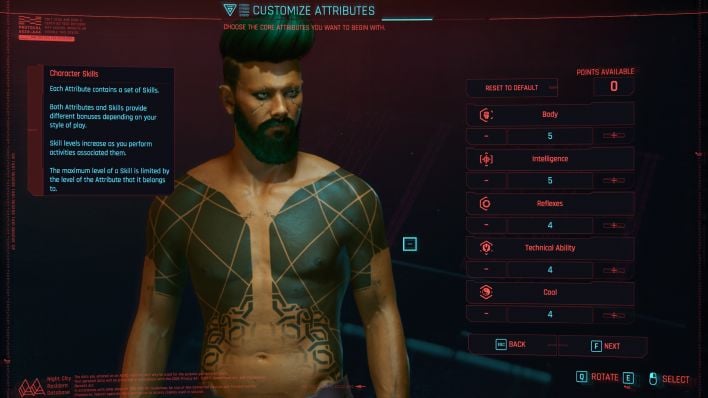 Cyberpunk is a huge, ambitious, open world, and CD Projekt Red has billed it, "be anyone, do anything." It's supposed to be a grandiose watershed moment that changes the course of gaming as an artform. It's certainly beautiful. CDPR put a ton of work into making Night City feel big and diverse. So far, we've found that it's a really good game, but nothing has quite felt "groundbreaking" yet. That's not a bad thing. After all, The Witcher III excelled as a big, open-world RPG, and we have no doubt that veterans of the Cyberpunk universe will be at home in Night City.

Nowhere is that more obvious than the character creator. Electronic Arts got it right fifteen years ago in Tiger Woods PGA Tour 2004 on the PlayStation 2, where players can customize every aspect of their golfers' faces and bodies using a set of sliders. That kind of customization has carried into other EA franchises like Dragon Age, too. By contrast, CD Projekt Red didn't make character creation as deep as it could have been. In Cyberpunk 2077, customization is limited to a series of pre-defined models for each part of the face and body. Rather than "be anyone," we're a human with decidedly human-colored flesh tones. Why can't we create a blue Na'vi from Avatar, for instance? The only reason is that it's not one of the palette of skin colors. 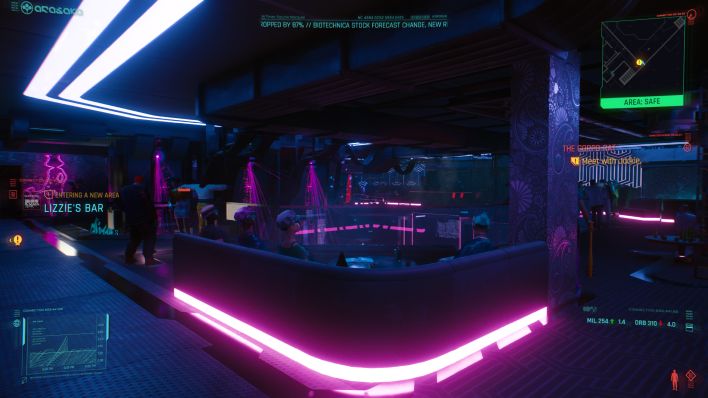 Everything for Corporate V goes horribly wrong inside Lizzie's Bar

There are three backstories for the main character, known as V: Nomads, who live in the Badlands; Street Kids, who grew up in the gangs of Night City, and Corporate agents. All three backgrounds have different advantages when it comes to dealing with different factions in and around Night City. We went the Corporate route and played through that version of V's backstory. V's boss gave him or her a kill order that they really didn't want to follow, and everything goes horribly wrong. Six months pass with V living on the street with Jackie Wells, one of V's earliest points of contact and would-be assassin, had that mission gone according to plan.

From there, we picked up V's story in Jackie's car, ready to either jump into a quick tutorial or get going on the first mission. We don't want to ruin the game or provide any other spoilers so quickly after launch, so we'll leave it there. But just know that Night City lives up to its name, and much of the city lives up to CDPR's advertisement. At night, it's dark, wet, and neon. 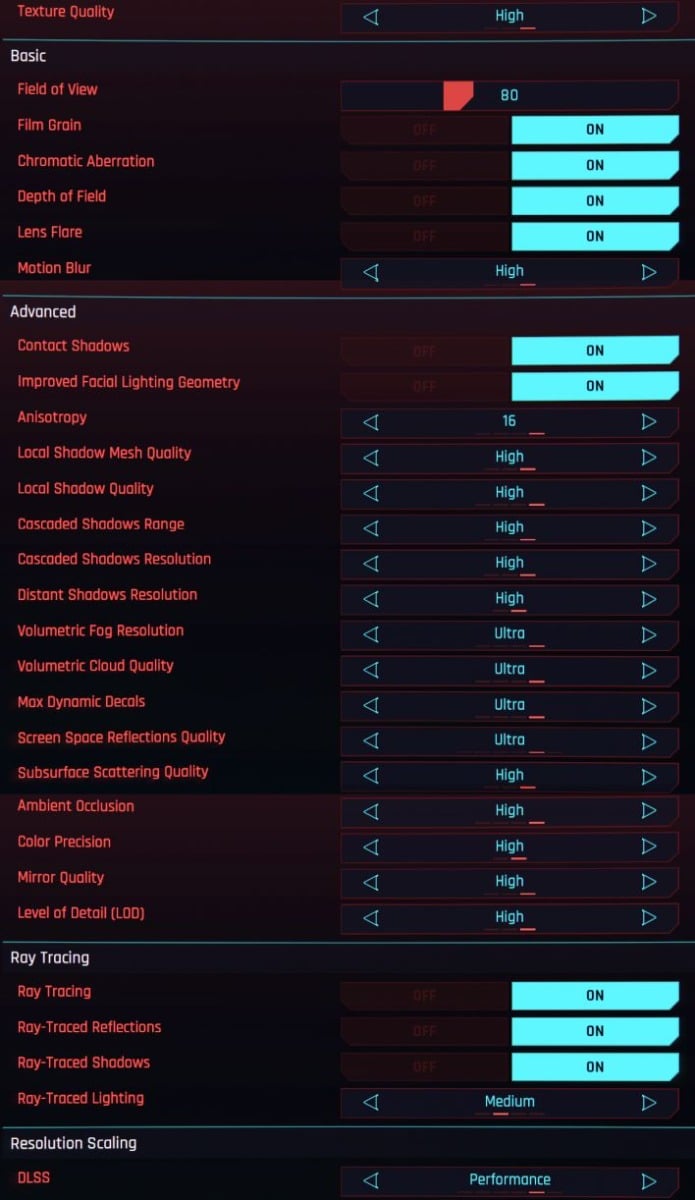 Cyberpunk has an enormous list of settings that affect traditional rasterized rendering. However, several of them have little to no effect on performance. At the top under Basic are several full-screen filter style effects like Chromatic Aberration, Depth of Field, and Lens Flare. None of these had any appreciable impact on our measured frame rates at any point in the game. They're just post-processing effects that can be safely disabled and are a matter of player preference.

For our test rig, we set everything to the highest value and didn't feel the need to dial anything back to get acceptable performance at 1440p. However, early testing on lesser hardware indicates that it might be best to dial some of the more intensive options to gain back a little performance. These include Volumetric Fog Resolution / Volumetric Cloud Quality and Scree Space Reflections Quality. Turning these down to Medium gave our GeForce RTX 2060 an immediate and obvious performance boost. Even with these settings turned down, Cyberpunk 2077 still looks and runs better on that lower-end system than it does on PlayStation 4 and Xbox One. 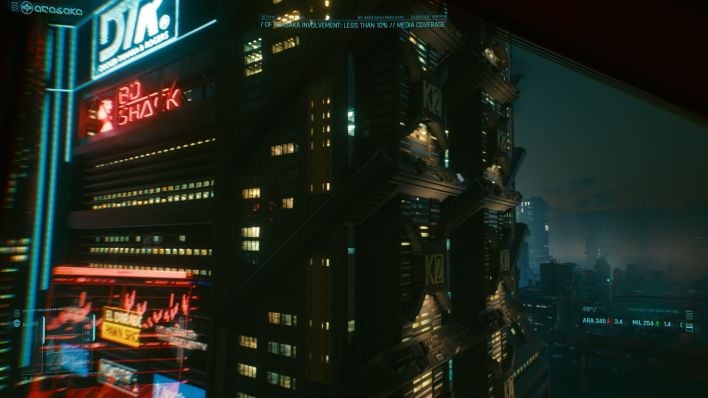 Today we're looking at 1440p performance with DXR and DLSS on the same gaming rig we've used in recent reviews. That includes a Ryzen 7 3700X and 32 GB of DDR4-3200 memory on an ASUS TUF Gaming X570-Plus (Wi-Fi). Our graphics card is a GeForce RTX 2080 SUPER with 8 GB of GDDR6 VRAM, and storage is handled by a 1 TB Sabrent Rocket 4.0 SSD. The advent of Zen 3, Ampere, and Big Navi mean it's not a top-of-the-line system these days, but we found the game to be quite enjoyable and fluid at 1440p once we used DLSS.

When we tested, we used the early combat tutorial level to capture frame times with CapFrameX, which does a nice job of slicing up performance so we can see not just the average frame rate and frame time, but also by percentile. Since this is a pretty powerful system, we left all of the main settings on their highest settings, and adjusted Raytracing and DLSS. Rather than use terms like "Low," "Medium," and "High" with ray tracing, CDPR calls them "Medium," "Ultra," and "Psycho. "Without further ado let's take a quick peek at performance. 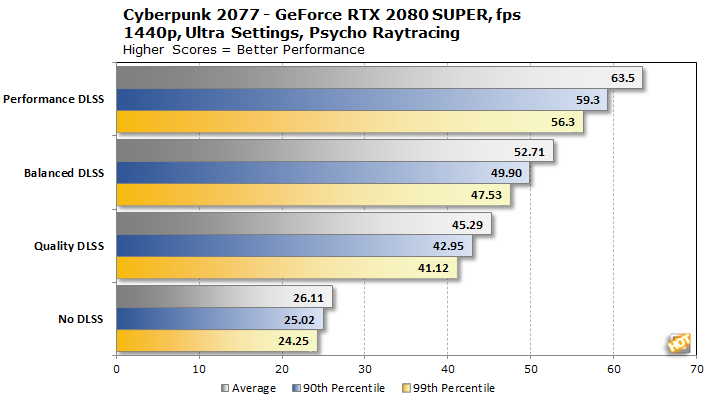 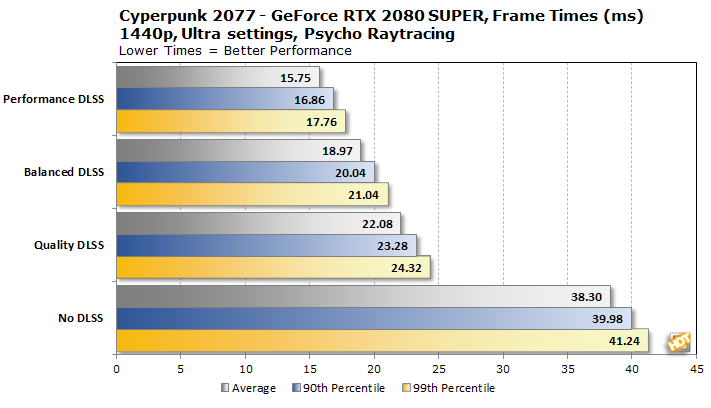 With  ray tracing set to the very highest level, labeled Psycho, the game was playable at 1440p only with DLSS enabled. At the native resolution, frame rates could not hit 30 fps, and it only got worse once the action got heavier. The good news is that Quality DLSS added a more than 50% performance uplift. Unfortunately, however, those who want 60 fps at this resolution will need more ray tracing horsepower to get there. Maybe that's why in CD Projekt Red's updated Cyberpunk 2077 system requirements -- the studio recommends a GeForce RTX 3070 for the higher visual fidelity.

What happens when we turn the ray tracing down a couple notches? Can we get playable frame rates without resorting to NVIDIA's AI-assisted upscaling? 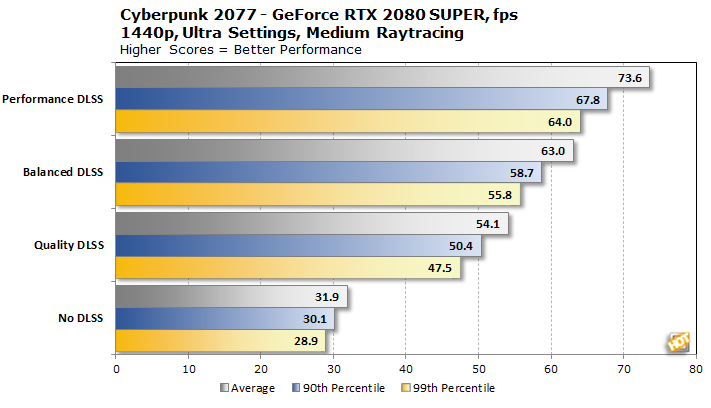 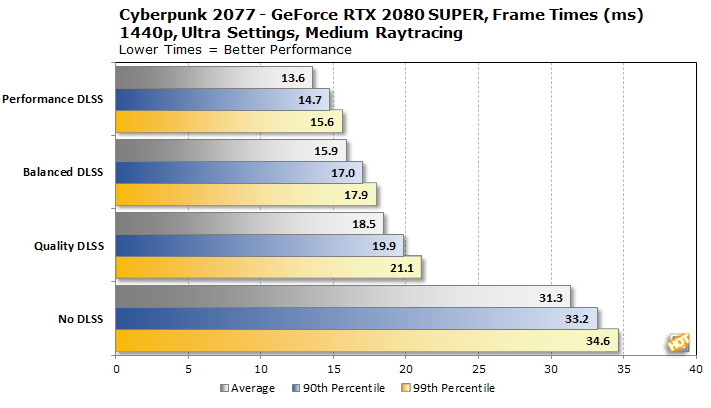 Cyberpunk 2077 only starts to become playable on our GeForce RTX 2080 Super at 1440p without DLSS. Even better, Balanced DLSS is able to average 60 fps, and Performance DLSS is finally able to sustain frame rates above 60 for the entirety of the run. The not so great news about that is that at 1440p, Performance DLSS internally renders the game at 720p and then upscales the game by a factor of two on both the horizontal and vertical axes, and visual quality starts to suffer. We'll examine this in much more detail in our upcoming full review. 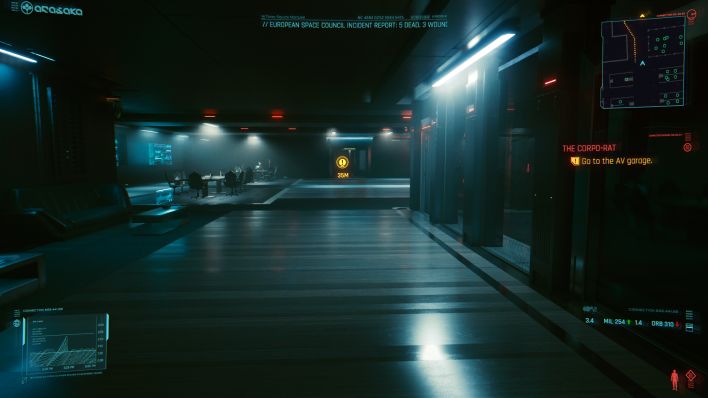 As it turns out, Cyberpunk 2077 is a pretty playable game on NVIDIA's last-gen hardware at WQHD resolutions, as long as DLSS 2.0 isn't a deterrent for you. We have long thought that NVIDIA's newer anti-aliasing method does a very nice job, and in some situations can even improve visual quality. It certainly lives up to its billing as a performance enhancement method, too.