Cyberpunk 2077 news has been ramping up quite a bit in the past few weeks -- namely because of a recently announced delay -- but CD Projekt Red is giving us some more insight into the game leading up to its eventual launch. Today, we've getting another glimpse at Night City in all its ray traced glory.

The video comes to us from NVIDIA, which managed to get some interviews with the CD Projekt Red team members to talk about what they're doing to bring Night City to life. Interspersed with those interviews are some nice gameplay images of Cyberpunk 2077 running full-tilt with real time ray tracing enabled.

In this case, the demo is of course running on GeForce RTX 30 hardware, and is leveraging DirectX Ray Tracing and NVIDIA DLSS. As you can see from the footage, the ray traced reflections bouncing of buildings, vehicles, streets, and even character models look amazing. The ray tracing effects also extend to shadows, diffuse illumination, and ambient occlusion.

CD Projekt Red has also updated its recommended specs table to show what kind of hardware you'll need to get crank up the dial on ray tracing in-game. With the "Minimum" setting at 1080p, you're going to want at least an AMD Ryzen 3200G-class processor with a GeForce RTX 2060 graphics card. Stepping up to "High" at 1440p, you’ll need to move up to a Ryzen 5 3600-lass CPU with a GeForce RTX 3070. 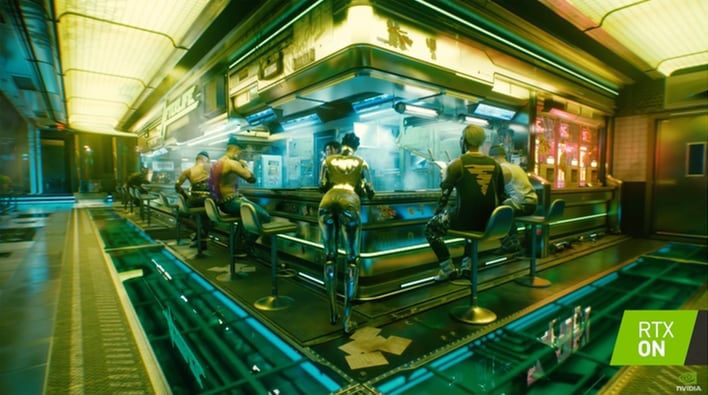 But if you want to go balls to the wall with all eye candy turned on coupled with the "Ultra" ray tracing setting at 2160p, you'll need a GeForce RTX 3080 graphics card. While we already know that Cyberpunk 2077 looks good on next-gen consoles like the Xbox Series X and PlayStation 5, the sheer graphics power available with GPUs like the GeForce RTX 3080/3090 and Radeon RX 6800 XT/6900 XT is driving some truly draw-dropping visuals.

Cyberpunk 2077 is scheduled for release [barring any unforeseen delays] on December 10th. The game is available for preorder right now for $49.99, which is $10 off its regular asking price.

If you decide to go the Google Stadia route, you can pay full price for the game ($59.99) and get a free Stadia Premiere kit -- which includes a Stadia wireless controller and Chromecast Ultra -- while supplies last.