It seems like just yesterday when Intel released its 11th generation Rocket Lake-S processors for the desktop market. Built using Intel's [extremely] mature 14nm process node, Rocket Lake-S is the last of its breed and will give way to all-new 12th generation Alder Lake architecture later this year.

Alder Lake is built on Intel's latest 10nm Enhanced SuperFin process and uses a hybrid configuration with a combination of high-performance cores coupled with efficiency cores. Next-generation DDR5 memory support will also be along for the ride, and Corsair is here to state that it will be ready to party.

Corsair explained that "DDR4 memory has had a great run," but it's time to get the ball rolling for the next big thing. The company says that DDR5 will bring some "key improvements for your current and future computing needs." 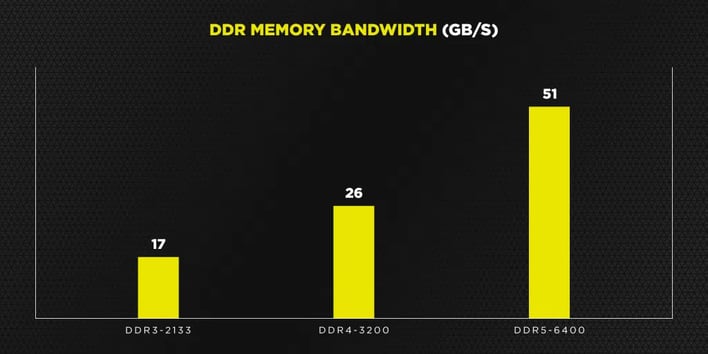 As Corsair makes the shift to DDR5, it is talking up the benefits of the new standard, including an immediate increase in available bandwidth. DDR4-3200 modules, which are standard issue for today's 11th generation Intel Core and AMD Ryzen 5000 processors, provides 26GB/sec of memory bandwidth. However, Corsair promises to deliver up to DDR5-6400 speeds right out of the gate, [nearly] doubling bandwidth to 51GB/sec. Baseline modules will be spec'd at a minimum of DDR5-4800 speeds.

When it comes to performance, DDR5 includes several refinements to minimize impacts on latency compared to DDR4. "With DDR5, individual modules are split into two separate channels by design, allowing for shorter traces that contribute to less latency and higher speeds when it comes to communicating with individual memory ICs on a memory module," Corsair explains [PDF]. "This also allows for what's referred to as command/address mirroring since the signal from the CPU has to travel a shorter overall path to access specific banks of memory, whereas in DDR4, a command/address signal had to travel through all banks of memory in a longer chain.

"Overall single access latency with DDR5 is relatively unchanged, while CAS Latency has increased, the overall latency of a top-tier DDR5 kit will be similar to previous generations of DRAM clocking in at 14-15ns." And all of this is achieved while Vdd has decreased from 1.2 volts to 1.1 volts. 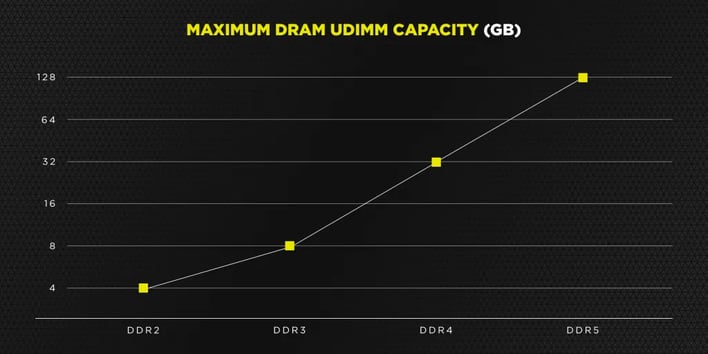 But that's not all; the DDR5 shift also means that Corsair can move past a typical single stick size limit of 32GB to a staggering 128GB. This allows mainstream motherboards to be equipped with up to 512GB of memory using four DIMM slots, while high-end 8-slot motherboards could be kitted out with 1TB of DDR5.

Chinese firms Jiahe Jinwei and Netac are already leveraging Micron-branded chips for the production of DDR5-4800 modules. Asgard's roadmap has DDR5-5600 modules on track for release later this year, while DDR5-6400 modules will ramp in 2022. Not to be outdone, Samsung has promised 512GB DDR5-7200 sticks, and Netac says that its "endgame" could deliver DDR5-10000 goodness.

Intel's first Alder Lake processors are rumored to launch in November 2021. We don't yet have a specific timetable for AMD's DDR5-capable Zen 4-based processors.