Intel has already confirmed it is planning to launch its 12th Generation Alder Lake-S desktop processors this year, but an exact release date eludes us. That's okay, because the lack of precise information keeps the rumor mill running. And to that end, word on the web is that Alder Lake-S will see a launch sometime in November.
That is a tad later than some previous leaks and rumors indicated, which had Alder Lake-S potentially arriving in September. Assuming this latest report is correct and Intel is indeed now looking at a November launch, then perhaps the silicon shortage is to blame. Either way, it looks like Intel will be making good on its promise to get Alder Lake-S out the door before next year.
It also appears as though Intel will beat AMD to the punch with a couple of key technologies, those being PCI Express 5.0 support and DDR5 memory. This is in contrast to when AMD was the first to implement official support for PCI Express 4.0 with its X570 and B550 chipsets. Intel later followed suit on mobile, and only recently on the desktop with the launch of Rocket Lake.
The difference, though, is that AMD presumably would not be far behind Intel in embracing next-gen technologies. Zen 4 is likely to arrive in early 2022, perhaps in as little as two months after Alder Lake-S launches. Either way, if you are thinking about building a new PC, this is one of those times where it makes sense to wait just a little bit longer, to see how things shake out (playing the waiting game can be an endless cycle, but in this case, newly supported technologies are on the horizon). 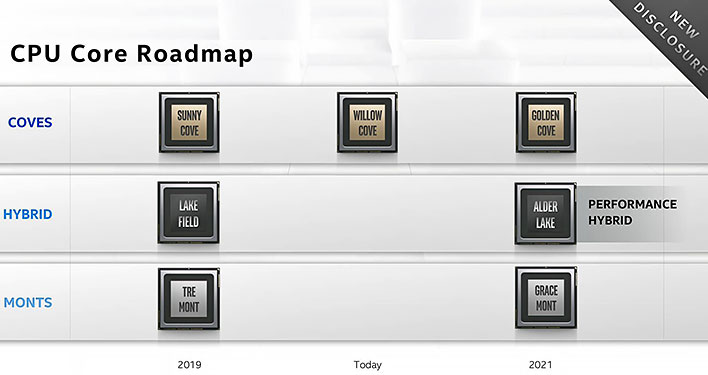 That said, Alder Lake-S will support both DDR5 and DDR4 memory. Not on the same motherboard, of course, but this does mean you will need to pay attention to the different motherboard options that emerge, depending on which route you take. DDR5 will offer more bandwidth—at least one memory maker has talked about plans of developing of 10,000MHz DDR5 DRAM—and unlike DDR4, ECC (Error Correcting Code) is part of the DDR5 standard.

Beyond PCI Express 5.0 and DDR5 support, the truly big deal with Alder Lake-S is a new heterogeneous architecture that will pair high performance cores with power efficient cores on the same die. This is similar in concept to Arm's big.LITTLE approach, and it has been great for mobile devices. Will it benefit the desktop, though? That is what we are all waiting to find out.
Alder Lake-S will also leverage a new LGA 1700 socket. According to those same unnamed sources, the shift to a rectangular shape will render today's CPU coolers physically incompatible with Alder Lake-S. That's another reason not to build a PC right now, if you can manage to wait—any cooler you buy today might not work with tomorrow's platforms.
Take the rumored Alder Lake-S release report with a grain of salt, because who really knows if the sources have accurate information they are passing on. That said, a November launch is at least plausible. In the meantime, it looks like early engineering samples are being doled out, as we recently wrote about a Core-1800 Alder Lake-S CPU with 16-core/24-thread design, clocked at up to 4.6GHz.